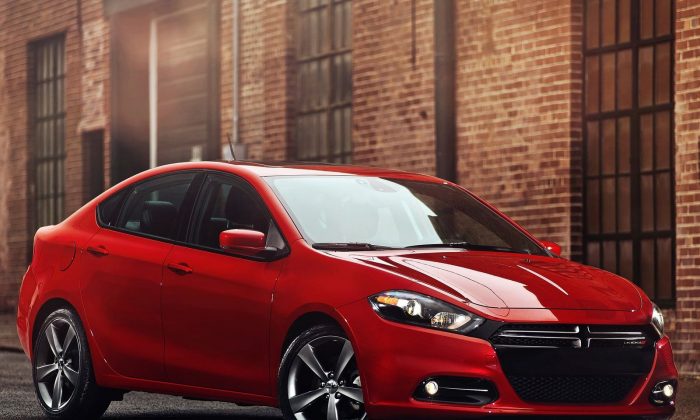 The Dodge Dart is a car of compromises. It was born from the after-stew of Chrysler’s bankruptcy in 2009, following which Italy’s Fiat assumed control. As part of its agreement with Uncle Sam, Fiat was obliged to build a world-class fuel-efficient compact in the U.S. So, it tapped the underlying architecture of the Alfa Romeo Giulietta, enlarged it slightly, and re-tooled Chrysler’s Belvidere, Ill., plant in which to build it.

Starting with a sleek Italian body, stylists did their best to integrate a little Dodge style with the crosshair grille and racetrack LED tail-lamps ala Charger, but the elegant curves and sweeping roofline are more Europe than America. Twin chrome exhaust tips, fog lamps, and 17” alloys look sporty. The Dart has a slightly cab-forward stance that reminds us of the Neon, but nothing between the two cars is shared.

Under the sleek nose is a 2.0-liter 4-cylinder engine that delivers 160 horsepower, 148 lb.-ft. of torque, and 24/34 mpg city/hwy. In our car, it’s connected to a 6-speed automatic transmission with AutoStick manual shift mode. It is not especially powerful or fuel-efficient, but gets the job done. If you want a bit more spunk, choose the available 1.4-liter turbocharged 4-cylinder that delivers the same 160 horsepower, but increases torque to 184 lb.-ft. Perhaps the best part of the powertrain is its exhaust, which sings like Pavarotti’s Ferrari.

Some of the Italian heritage shows up in the chassis. A four-wheel independent suspension and four-wheel disc brakes meet or beat class standards to give the car competent handling. Steering feel is a good balance of firmness. I wouldn’t say the car drives like a Lamborghini, but it is certainly competent.

On the road, you get the feeling all of the mechanical bits and pieces are part of a complicated Italian family. They know they’re stuck together as a unit, but don’t always seem to like each other. To conserve fuel, the transmission shifts up early, causing the car to feel sluggish around town. When the engine revs up from your big foot, the transmission seems to yawn and stretch before stepping down a cog or two.

Engineers will tell you the four-wheel independent suspension was softened from the Alfa Romeo, but it can still be harsh on pot-holed American streets. On the Interstate, or curvy back roads, the car is poised and balanced. It was nearly perfect on a four-hour round-trip drive from Indianapolis to Auburn.

An area that needs no explanation is safety. Dart achieves an overall Five Star rating in the National Highway Traffic Safety Administration (NHTSA) crash tests. The notoriously tough Insurance Institute for Highway Safety named Dart a “Top Safety Pick” after it aced the ridiculously destructive small frontal off-set crash test. It’s right there with the Honda Civic, and much better than other well-known competitors. In this area, engineers clearly did their homework.

Despite the impression you might get from some reviews, the Dart is not a bad car. In fact, compared to recent Chrysler Group compacts, it is quite good. You just get the sense that engineers were under tremendous pressure to get the car to market as quickly as possible. Now there’s time to get the details spot-on. Judging from the Fiat 500L and Jeep Cherokee that share its architecture, Dart has the potential to become great. It all takes time.

The Dart was as much about saving Chrysler as knocking off competitors like the Honda Civic, Ford Focus, Toyota Corolla, or Chevy Cruze. That finished, the polishing can begin. An as-tested price of $21,770 should cause no grief—or compromises.