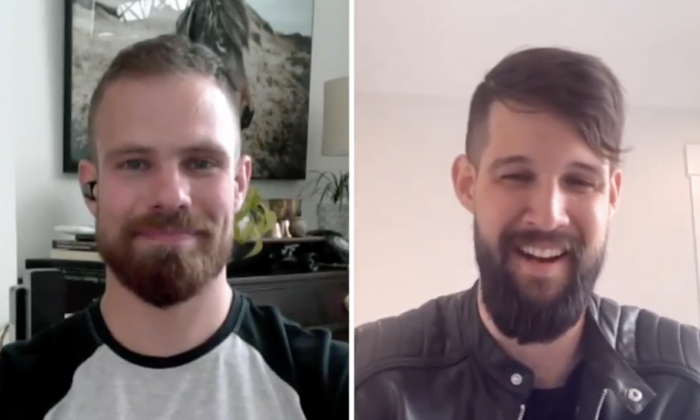 Jeremy Regoto (L) and Andrew Peloso, the directors of the six-part docuseries “Trucking for Freedom,” during an interview with EpochTV's "American Thought Leaders" program on June 28, 2022. (Screenshot via EpochTV)
Canada

Andrew Peloso and Jeremy Regoto, the directors of the historic six-part docuseries “Trucking for Freedom,” said that unlike the legacy media, their goal was to capture what really happened on the frontlines of the 2022 Canadian Freedom Convoy trucker protests in Ottawa.

The first episode of the series is now streaming on EpochTV.

The filmmakers’ essential reason for creating the documentary series was to show the human experience of the participants in the freedom convoy and challenge the legacy media’s narrative about the truckers. They said they hope their docuseries will help unite people, beginning with Canadians.

“All of us, regardless of what we believe in, we need to slowly lose interest in the clear obsession towards ideology and picking a side. I think it totally disregards the human experience when we get that pitted against each other for a different political view or different thoughts and beliefs,” Peloso said during a recent interview for EpochTV’s “American Thought Leaders.”

Trucking for Freedom–Chapter One: How We Got Here

Peloso said this type of obsession with taking a side has created the modern day cancel culture, which has tried to destroy livelihoods and lives and is fueled by the narratives of the legacy media. The film tries to wake people up and addresses how the media and government propaganda have sown division amongst groups.

“It is a violating experience to have to realize that you are being fed propaganda. That is a shock to anyone, regardless of how discerning or good-hearted [you are],” said Peloso.

Part of the “waking up” is realizing that the Canadian media is funded by the government and not committed to delivering Canadians the truth, because true journalism is about telling the facts on both sides, and most outlets were echoing the government’s talking points and trying to protect their own self-interests, said Peloso.

“What we wanted to do, and where we feel our little part is, is just to make a documentary that represents this as a historical event, because it truly is a historical event,” Peloso said. “There’s never been something like this where people have jumped on the highway and had a sustained peaceful demonstration for that amount of time in Canada, and regardless of a particular ideology or political view, we just wanted to burn that into history.”

“The Canadian media did not want to represent this at all. They didn’t want to notarize it. They didn’t want to acknowledge it. It was basically nil,” said Regoto. The international media groups were better but still not comprehensive in their coverage of the protests, he added.

Media Is Spinning Canada’s Freedom Convoy as a Hotbed of ‘Extremism’—Is That Really What’s Going On?

Although there were thousands in the convoy and more joined in Ottawa, according to Global News, Canadian Prime Minister Justin Trudeau said, “The small fringe minority of people who are on their way to Ottawa, who are holding unacceptable views that they are expressing, do not represent the views of Canadians.”

The Canadian media repeated Trudeau’s false narrative that the convoy was anti-vaccination and white nationalist, and a “small fringe minority,” Regoto said.

In the process of documenting the trucker protest, Regoto said, it became clear how the legacy media worked alongside the government to sow fear and division among Canadians.

“I think one of the most important lessons that I’ve learned is that with large government comes larger control, and with more division, there is more and more justified control,” said Regoto.

“They have no control if people stand together and respect each other for their views, their differences in opinions,” said Regoto. “Unconditional love for our fellow man is the most important message that we can continue to pass on.”

Although the trucker protest was billed as a conspiracy in which white supremacists were trying to overthrow the Canadian government, the truth was the protestors were trying to uphold the principle of freedom, and the movement was completely grassroots, so much so that it had trouble staying organized, the filmmakers said.

Regoto said they drove across the country with a group of truckers who were leading the convoy from the West, and “we’re realizing that these guys basically have one plan and it’s to drive to Ottawa, and that’s it,” said Regoto.

Moved by the truckers’ purpose of standing for freedom, various groups, including doctors, lawyers, and former police joined the truckers, and it was truly grassroots and “beautiful,” said Regoto.

The grassroots effort was made more apparent when, in order to get the most truthful perspective of the protest, Regoto and Peloso put up a website where they asked Canadians to upload their personal video footage of the protests.

“Whether it be cell phone footage on overpasses as the trucks drove by, or cinematographers that were out there with their cameras, or drone pilots that were shooting, at certain points in time we were getting 60,000 hits a day to that website, dropping our footage,” said Regoto.

Millions of Canadians came together for freedom and to stand up to a government that was abusing its power by extending lockdowns and imposing vaccine mandates, said Regoto.

Unlike what the legacy media reported, the vast majority of participants were peaceful and came together to protect monuments, clean up litter, or shovel snow from the sidewalks, and everyone helped in some way because they believed in the importance of what they were doing, said Peloso.

“I was there every single day until past the Emergencies Act, when we had the talk about ways to get out under the cloak of the night with police check stops. We were there every day filming, and not once did we feel unsafe,” said Peloso.

However, despite being peaceful, the protest was met with excessive force when a large group of police took away the truckers’ gas, said Regoto.

“That was when the attitude between the freedom convoy and the police started to take a spin. The Emergency Act was declared shortly after that and there were notices that were put on truck windows,” said Regoto.

“We were filming everything and there were hundreds and hundreds and hundreds of police officers, riot police, debatable whether it was military or not,” said Regoto. In his estimation, they were brought in from other cities because the local police knew the truth and would not have used violence on the protestors.

During the police attack, “we watched veterans getting beaten. We watched vandalism take place,” whereas before this point there had been no vandalism at all, said Regoto. People were being dragged, some taken to other places and disoriented and released.

“And that’s when this story is going to take a serious dive [and] I can honestly say maybe even shame for our country, in how we handled the freedom convoy,” continued Regoto.

The reason this level of violence was allowed to be perpetrated on the protestors is that the neighboring police departments and the broader public believed the lies the media told them about the trucker convoy.

Meanwhile, amid the filming, Peloso and Regoto did not realize the full impact of the trucker protest as “everyone’s trying to make the best decision and most courageous decision at the same time looking at the future,” said Peloso. The truckers that were most inspiring were the ones who had the strongest resolve and did the unpopular thing for the sake of freedom, he added.

“I don’t think anyone had any idea how big of a mark this would leave on history, and that honestly makes me quite proud, because Canada doesn’t do a lot first,” said Peloso.

The “Trucking for Freedom” docuseries consists of six episodes, with an episode being edited and released every 45 days, and will culminate in a feature-length movie with the goal of encouraging people to think about what really happened, “regardless of their political views or ideology,” the filmmakers said.