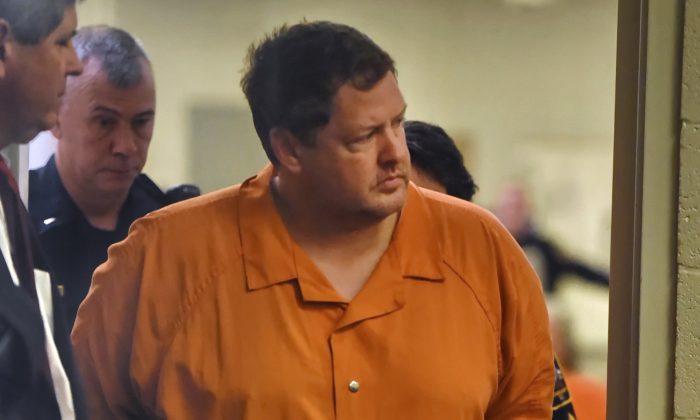 In the documents the agency provided Friday to The Associated Press, an unidentified person wrote in 2009 “something MUST be done to stop this crazy man before something dreadful happens.” The complaint includes Facebook screenshots showing that Kohlhepp identified himself as a real estate agent while posting about sex, revenge and guns.

One Facebook quiz he takes about revenge concludes he’s the “reaper” and would likely take “a fatal type of approach,” to which Kohlhepp replied, “That part is true. I do take payback a little too far. Easy solution, don’t piss me off.”

The filer asks the state Real Estate Commission, a division of the licensing agency, if “this is how we want our profession represented.”

The filer says he had confronted Kohlhepp about Facebook posts telling potential home buyers that a woman — whose name is blacked out — would “mow your lawn for free” or “wash your car in a yellow bikini” for a sale.

The Department of Labor, Licensing and Regulation said in a statement those complaints weren’t investigated because no alleged violations of real estate law were made. A third complaint in 2014 from one of Kohlhepp’s clients was investigated and dismissed.

One home seller, describing himself as a former client, accused Kohlhepp of forging his signature on real estate agreements, the records show. Kohlhepp’s eight-page response to that and other allegations cast the seller as an unhinged liar, apparently convincing the commission.

Kohlhepp remains jailed and it was unclear if he has an attorney.

All three complaints point out that Kohlhepp was a registered sex offender. But the licensing agency already knew that; it just didn’t have the facts behind his criminal record.

As a teenager, Kohlhepp was convicted of raping a 14-year-old neighbor at gunpoint and threatening to kill her siblings if she called police. He was sentenced to 15 years and released from an Arizona prison in 2001.

When Kohlhepp applied for a South Carolina real estate license in 2006, he checked the box acknowledging he had a felony conviction. At the time, state law did not yet require background checks for real estate agents.

It took a complaint about Kohlhepp’s Nov. 3 arrest on kidnapping charges, filed the next day, to get his real estate license suspended.

Kohlhepp, 45, was arrested after deputies said they found a woman chained by the neck in a metal storage container on his 95-acre property in rural Woodruff. Her boyfriend was found in a shallow grave the next day. The couple had been missing for more than two months. Authorities said Kohlhepp then pointed them to two more graves, and investigators uncovered the bodies of another couple missing since last December.

Kohlhepp is also charged with killing four people at a motorcycle shop in 2003 — a cold case many feared would never be solved. Spartanburg Sheriff Chuck Wright says Kohlhepp confessed after he granted several requests, including letting Kohlhepp talk to his mother.

The Anderson Independent-Mail first reported the complaints, obtained through a public records request.