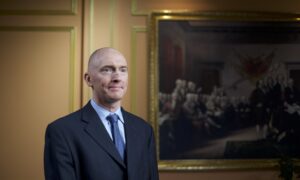 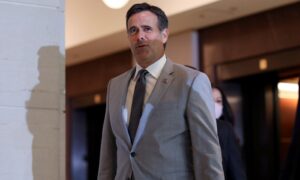 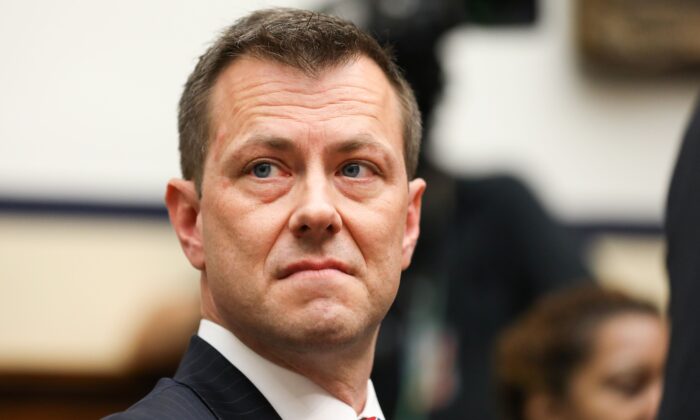 FBI Deputy Assistant Director Peter Strzok testifies at the Committee on the Judiciary and Committee on Oversight and Government Reform Joint Hearing on Oversight of FBI and DOJ Actions Surrounding the 2016 Election" in Washington on July 12, 2018. (Samira Bouaou/The Epoch Times)
Crossfire Hurricane

U.S. Attorney John Durham is reviewing the origins of that investigation and landed his first guilty plea last month.

While he doesn’t have visibility into the timeline of Durham’s probe, Meadows said he’s reviewed additional documents that “say that a number of the players, the Peter Strzoks, the Andy McCabes, the James Comeys—and even others in the administration previously—are in real trouble because of their willingness to participate in an unlawful act.”

“And I use the word unlawful at best, it broke all kinds of protocols and at worst people should go to jail as I mentioned previously,” Meadows said during a virtual appearance on Fox Business’ “Mornings With Maria” on Monday.

Strzok, best known for exchanging biased text messages about Trump with an FBI lawyer he was having an affair with, was fired by FBI officials in 2018.

The former agent sat down for an interview with CBS that ran over the weekend. He insisted that the counter-intelligence probe, dubbed Crossfire Hurricane, was opened on a legitimate basis.

Meadows said it was easy for Strzok to make claims when not under oath.

The facts that have come out show that officials treated Trump “very differently, in an inappropriate way, and they must be held accountable,” he added.

Durham’s criminal investigation is being kept under tight wraps, prompting much speculation about when another development will come, or even if any other people will be charged.

Trey Gowdy, a Fox News contributor who used to serve in the House of Representatives, said over the weekend that there’s concern that Durham “is dragging his feet.”

Durham, he said, “is going to access documents that the FBI never shared with Congress and he’ll write the definitive accounting of what happened.”

“Whether or not there’ll be more indictments or not, I don’t know and I like to assume that there will not be,” he said, adding: “That puts me in a small minority, but I’m assuming that the Clinesmith indictment will be the only one.”

Kevin Clinesmith recently pleaded guilty to altering an email to say Carter Page, a former Trump campaign adviser, was not a CIA asset when the CIA had said the exact opposite.

The altered email was used to obtain spy warrants against Page, enabling the FBI to conduct surveillance against Page and people he was linked to in the future and past.

Meadows, meanwhile, said Trump supports the declassification of all documents, along with full transparency.

“He has nothing to hide,” he said.