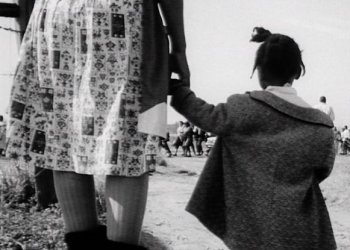 BLOODY SUNDAY: A mother and daughter watch the famous civil rights march from Selma to Montgomery, Alabama in the new documentary 'Soundtrack for a Revolution.' The marchers were attacked by local authorities, yet persevered in their peaceful march. (Courtesy of the National Archives)
Entertainment

Documentary Review: ‘Soundtrack for a Revolution’

“You can cage the singer but not the song,” says Harry Belafonte at the onset of Soundtrack for a Revolution, a pulsating testimony of the American Civil Rights Movement through song and archival footage.

The power of music kept those on the front lines energized and together. When they felt tired and discouraged, some one would begin to sing. Shortly, everyone would join in and a contagious energy would surge through the crowd. Before long the marchers would be re-energized and their efforts would start anew.

These songs had the power to break down cultural and racial barriers like an invisible shield that moved the soul to action. Regardless of the apparent dangers, the songs and unity gave them the courage to remain steadfast. This was evident after “Bloody Sunday” on March 7, 1965 at the Edmund Pettus Bridge crossing in Selma, Alabama, where armed officers attacked peaceful demonstrators. But once again after a meeting of singing and prayer, the energy empowered the marchers to stay strong and continue to march the 50 miles from Selma to Montgomery.

The documentary artfully mixes historical footage with current commentary from those on the scene back in the day, such as Congressman John Lewis (D-GA), former Georgia State Senator and current NAACP Chairman Julian Bond, entertainer Harry Belafonte, and former UN Ambassador Andrew Young.

Studio performances by artists were sprinkled through out the documentary. John Legend, Richie Havens, Wyclef Jean, Joss Stone, Anthony Hamilton, The Blind Boys of Alabama, The Roots, Angie Stone, Mary Mary, and The Carlton Reese Memorial Unity Choir celebrate renditions of freedom songs such as “We Shall Over Come,” “Wade in the Water,” “Eyes on the Prize,” and “Ain’t Gonna Let Nobody Turn Me Round.” These songs did not originate with the Civil Rights Movement, but were words that had been chanted by slaves and ex-slaves many years prior to the American Civil Rights Movement.

The documentary brings to light shocking footage of past injustices, racially motivated violence, and segregation—though most of all it tangibly conveys the spirit that “we shall overcome.”

The film hits a zenith with the coverage of the assassination of Dr. Martin Luther King Jr., as soul singer John Legend’s inspirational rendition of “Woke Up This Morning” resonates that the struggle is not over, but there is hope.

Dr. King made it known early on that death was not a problem for him. He said, “If a man has not discovered something that he will die for, he isn’t fit to live.”

As civil rights leader Rev. Samuel Billy Kyles says at the documentary end, “You can kill the dreamer, but you absolutely cannot kill the dream,” as images of Barack Obama raising his right hand to take the oath of office as the first black president of the United States of America conclude the film.

Soundtrack for a Revolution has been placed on the Academy Awards’ short list for Best Documentary award. It opens today and can be seen at the Brooklyn Academy of Music’s cinema on the following days and times: