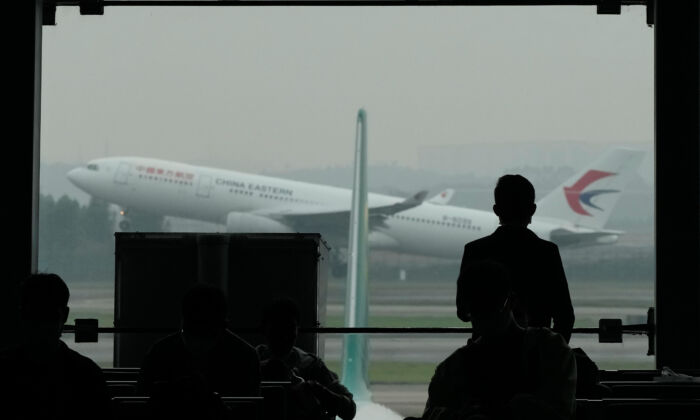 A passenger looks on as a China Eastern flight takes off from the runway of Baiyun Airport on March 25, 2022, in Guangzhou Province. China Eastern, one of China's four major airlines, said Thursday the Shanghai-based carrier and its subsidiaries have grounded a total of 223 Boeing 737-800 aircraft while they investigate possible safety hazards after the crash of its flight MU5735 on March 21. (Ng Han Guan/AP)
Social Issues

The China Eastern Airlines flight MU5735 crash in March killed all 132 people on board the plane. The company’s management and safety practices are now attracting public scrutiny.

The original report about the documentary by mainland Chinese media The Paper has been deleted from the internet. The film, produced by China Eastern Airlines, promotes the ability of company staff to repair the Boeing 737-800NG pickle forks without Boeing participation. However, it also unintentionally shows the potential problems of China Eastern’s maintenance team operations.

Sky, who graduated from a professional aviation university and has nearly 20 years of experience in flying aircraft, told the Chinese language edition of The Epoch Times that he’s surprised by the video and had some doubts about China Eastern Airlines’ procedures.

The documentary quoted a 2019 CCTV news report, saying that Boeing globally recalled about 50 aircraft with “pickle fork” cracks, including China Eastern’s two Boeing 737-800NG aircraft. However, according to the video news report, it would take at least six months for the planes to be sent to Boeing’s maintenance depot in Victorville, California. After assessing economic losses and operating costs, China Eastern decided to repair the component on its own.

No information about authorizing China Eastern Airlines to carry out the repair can be found in Boeing’s public data.

The replacement procedure is complex, requires a lot of engineering skill, and an aviation sheet metal team that is specialized in the aircraft.

According to the China Eastern promotional video, to make the 25.43 mm (approximately 1 inch) holes on the plane, they didn’t have the precision tool that is required, so the engineering team of China Eastern Airlines made a tool and adopted the self-developed manual “step-by-step reaming” method to enlarge the holes. Sky said that the manufacturing of the aircraft is very precise, and each hole must withstand a lot of pressure. If there is an error in the hole spacing, it will definitely affect the pressure that the aircraft can withstand during flight.

He said that most aircraft manufacturers use computer-controlled instruments to accurately measure the data and  precision drills to make the holes. It’s rare for the job to be done “by hand.” He is not sure if the China Eastern manual method is safe.

He said that China Eastern’s repair of the Boeing 737-800NG may have reduced operating costs and expenses, but has reservations about whether it can achieve the required level of safety and professional standards.

Liu Xiaodong, head of China Eastern’s public relations department, issued a statement about the China Eastern Airlines flight MU5735 crash and the danger of “shift fork assembly” maintenance, saying that the aircraft repaired by China Eastern was withdrawn from the fleet on September 8, 2020, and was not the B1791 that crashed. However, it cannot quell the suspicion that manually repairing the planes without authorization is a common practice of the airline.

Sky said that in order to avoid such a tragedy from happening again, airlines and related organizations should submit the maintenance and repair records of each aircraft so that industry experts can make professional judgments and ensure the safely of air travel.

Xu Manyuan contributed to the report.