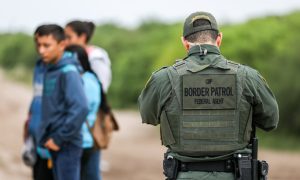 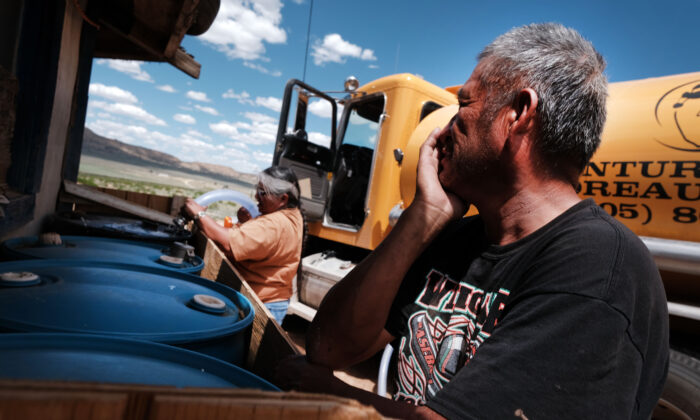 A member of the Navajo Nation receives a water delivery in the town of in Thoreau, New Mexico, on June 06, 2019. (Spencer Platt/Getty Images)
AMERICA

Doctors Without Borders Stand With New Mexico Tribes Against COVID-19

A team from Doctors Without Borders, an international organization that provides medical aid to communities in need, is working with Native American tribes in New Mexico to help curb the spread of COVID-19.

The team of nine people is working with communities in the Navajo Nationand New Mexico after arriving in mid-April, Nico D-Auterive, a spokesperson, told The Epoch Times.

The team will stay until at least June.

“As in several other parts of the US, we are working closely with local officials, health care providers and organizations that are directly addressing the needs of groups particularly vulnerable to COVID-19,” D’Auterive said in an emailed statement.

“Doctors Without Borders is focused on providing technical guidance to health care facilities and organizations to assist with infection prevention and control.”

Navajo Nation is the largest Native American tribe in the United States.

She told the outlet that the organization is currently “focusing on providing technical guidance to health care facilities and communities with infection prevention and control.”

Tribal communities across the state have been hard hit by COVID-19, the illness caused by the Chinese Communist Party (CCP) virus, commonly known as the novel coronavirus, which emerged from China last year.

According to the New Mexico Department of Health, around 56 percent of COVID-19 cases are Native American, while they make up only around 11 percent of the state’s total population.

Navajo Nation President Jonathan Nez told KOAT Action News that he is grateful to participating organizations “for sending their warriors to the frontlines to this war against coronavirus.”

“We will need additional health care professionals here on the Navajo Nation,” Nez said. “We don’t know if this is going to be a virus that is going to stay for a while.”

D’Auterive told the Albuquerque Journal that the nine-person team consists of physicians, nurse-midwives, logisticians, and a health promoter.

“Our team has been focusing on how infection prevention and control can be improved in various facilities and attempting to better understand the nuances of community and household transmission,” D’Auterive said.

Jean Stowell, head of MSF’s COVID-19 team in the United States, said in a statement that the group has received hundreds of queries from local governments and civil society organizations across the United States asking for engagement.

“Based on our own experience responding to infectious disease outbreaks around the world, MSF is helping organizations and health care providers in the US adapt and apply public health guidance according to the needs and resources available in their particular communities,” Stowell said.

Authorities in most states are telling people to protect themselves from COVID-19 by staying home, avoiding crowds, and washing their hands often,” Dr. Carrie Teicher, director of programs for MSF in the United States, said in a separate statement.

“This isn’t possible for the millions of people in the US who are housing insecure. Where are they supposed to shower or wash their hands when public restrooms and facilities have closed? For people living in shelters or in communal housing, how are they supposed to self-isolate?” she said.

The organization has also worked to address pandemic needs in New York City, an outbreak hot spot. There, they partnered with local organizations seeking to reduce infections among the homeless.

Measures include donating over 80 handwashing stations to places like soup kitchens, and opening a temporary shower trailer in Manhattan, offering free showers for people who lack access to such facilities, with a particular focus on the needs of society’s most vulnerable.