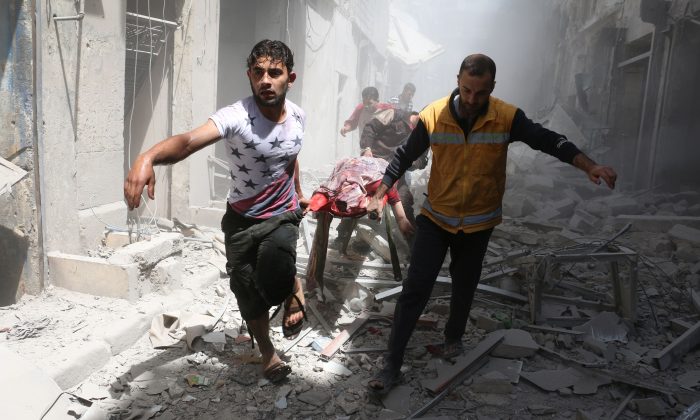 Syrian men carry a body on a stretcher amid the rubble of destroyed buildings following a reported air strike on the rebel-held neighbourhood of Al-Qatarji in the northern Syrian city of Aleppo, on April 29, 2016. (Ameer Alhalbi/AFP/Getty Images)
International

Some of the world’s foremost aid organizations are urging the world not to target hospitals, medical staff, and patients in war zones—especially after the April 27 bombing of a hospital in Aleppo, Syria, that killed 50, including 6 medical staff, according to Doctors Without Borders (MSF).

“We are outraged at the alarming frequency of attacks on health personnel and facilities in Syria,” states a joint press release of the World Health Organization (WHO) and the United Nations Children’s Emergency Fund (UNICEF).

Last year a medical facility was bombed every week in Syria, according to MSF. There were 2,400 attacks on health care personnel, facilities, transport, and patients across 11 countries during the 3 years up to December 2014, according to the Red Cross.

The Wednesday attack on the Al Quds hospital in Aleppo sparked outrage not only because of the large number of casualties, but also because it appeared as if intended to kill maximum civilians.

At 10:00 p.m. two barrel bombs struck close to the hospital, prompting an influx of wounded people being brought in, said Pablo Marco Blanco, MSF operations manager for Middle East to PBS. It was then that a third barrel bomb hit the entrance and emergency room.

“We cannot ascertain it,” Blanco said. “But all elements show” the attack was “staged to provoke the maximum number of citizens killed.”

U.S. defense Secretary John Kerry said on April 28 the government is still gathering data about the incident, but “it appears to have been a deliberate strike on a known medical facility and follows the Assad regime’s appalling record of striking such facilities and first responders.”

The hospital was supported by both MSF and the Red cross.

“The recent attack on the [Red Cross]-supported Quds hospital is unacceptable and sadly this is not the first time the lifesaving medical services have been hit,” said Marianne Gasser, head of the Red Cross mission in Syria. “We urge all the parties to spare the civilians. Don’t attack hospitals, don’t use weapons that cause widespread damage. Otherwise, Aleppo will be pushed further to the brink of humanitarian disaster.”

On May 3, 2016, the United Nations Security Council will vote on a resolution designed to stop future attacks against hospitals, patients, and civilians in war zones.

General Joseph Votel, commander of the U.S. Central Command, said on Friday that the accidental U.S. gunship bombing of an MSF hospital in Afghanistan last fall was not a war crime because the attack was unintentional—the ground forces requested an airstrike on a location about 400 m (437 yards) from the hospital, but the gunship mistook the hospital for the target.

Votel said the accidental attack was caused by “a combination of human errors, compounded by processes and equipment failures.”

The military disciplined 16 people in relation to the incident, but none of them face charges.

Doctors Without Borders is using the hashtag #NotATarget on Twitter this week.