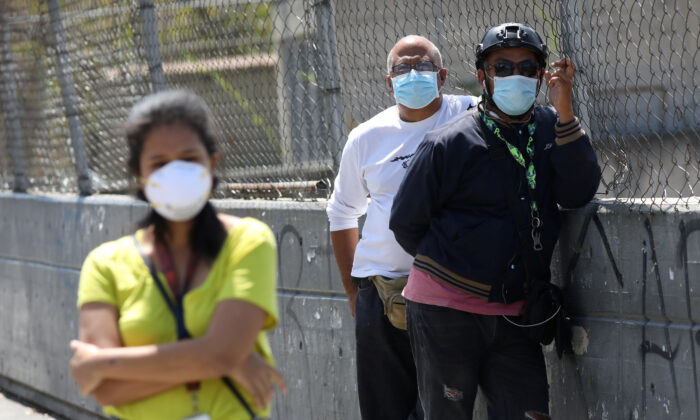 People wearing protective masks on the streets after the start of quarantine in response to the spread of coronavirus disease (COVID-19) in Caracas, Venezuela March 17, 2020. {Manaure Quintero/Reuters)
PUBLIC HEALTH INFORMATION

Doctors Warn ‘Loss of Smell’ Could Be a Coronavirus Symptom

Symptoms should be part of 'list of screening tools,' group says
By Jack Phillips
Print

A UK doctor group, the British Rhinological Society, has warned that a loss of smell or taste could be a symptom of the CCP virus, with a U.S. doctors group calling for the symptom to be added to a “list of screening tools” for the virus.

“Post-viral anosmia is one of the leading causes of loss of sense of smell in adults, accounting for up to 40 percent cases of anosmia,” Professor Claire Hopkins wrote on Sunday in a report. “Viruses that give rise to the common cold are well known to cause post-infectious loss, and over 200 different viruses are known to cause upper respiratory tract infections. Previously described coronaviruses are thought to account for 10-15% cases.”

“It is therefore perhaps no surprise that the novel COVID-19 virus would also cause anosmia in infected patients,” she said, adding that patients from Italy, China, and South Korea have been known to have the symptom. She said more than two-thirds of confirmed German patients have experienced it.

“In South Korea, where testing has been more widespread, 30 percent of patients testing positive have had anosmia as their major presenting symptom in otherwise mild cases,” Hopkins wrote.

The American Academy of Otolaryngology-Head and Neck Surgery also wrote that symptoms of a lack of sense of smell or lack of taste should be used when attempting to identify patients.

“Anosmia, in particular, has been seen in patients ultimately testing positive for the coronavirus with no other symptoms,” said the academy in a statement on Monday, adding that it would “warrant serious consideration for self-isolation and testing of these individuals.”

Utah Jazz player Rudy Gobert, who contracted the virus earlier in March, wrote on Twitter that he can’t smell anything and believes it’s a symptom.

“Just to give you guys an update, loss of smell and taste is definitely one of the symptoms, haven’t been able to smell anything for the last 4 days. Anyone experiencing the same thing?” he said.

Meanwhile, a professor for ear, throat, and nose surgery in Australia echoed statements that loss of taste and smell should be tracked as a possible sign.

“It is these ‘silent carriers’ who may remain undetected by current screening procedures, which may explain why the disease has progressed so rapidly in so many countries,” Simon Carney, a professor at the Flinders University in Adelaide, told Bloomberg News.

Health experts say that CCP virus symptoms include a dry cough, shortness of breath, and a fever, and that it can lead to pneumonia.