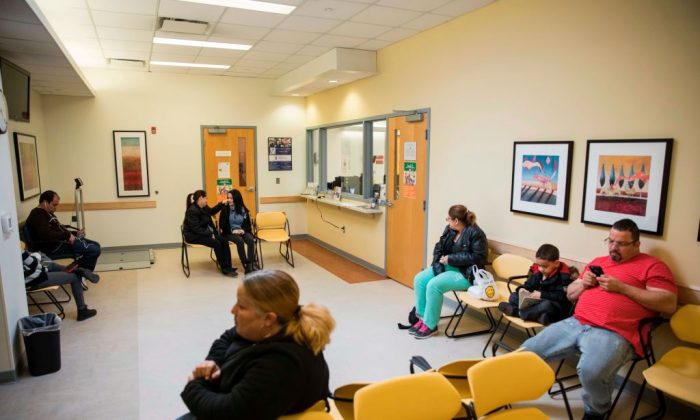 Patients wait in the waiting room at the Esperanza Health Center in Philadelphia, Pa., on March 13, 2017. (DOMINICK REUTER/AFP/Getty Images)
US

The growing complexity of the health care system has beset doctors with mushrooming bureaucracy, raising costs for patients and taxpayers.

Running a doctor’s office naturally invites paperwork, from booking appointments to maintaining health records to bookkeeping. But a deluge of additional paperwork floods in when a doctor asks to be paid.

Doctors navigate dozens of funding streams, each a bureaucratic labyrinth brimming with forms to fill out and rules to follow. In addition to Medicare, Medicaid, and military insurance, there are dozens of other insurance companies, each with a unique set of requirements.

As a result, doctors and hospitals spend more than a quarter of their income on administration, amounting to hundreds of billions a year. Due to a lack of research, these numbers are outdated, with the latest numbers for private practices being from 1999, and for hospitals, 2011. But that only means the numbers currently known are conservative.

On average, each doctor needs to hire four administrative workers to cope with the bureaucracy, Tennant said.

Here’s the problem: Most care is paid for by a third party—an insurance company or the government. To get paid, a doctor needs to do the following:

But it doesn’t end there. The Affordable Care Act (also known as Obamacare) requires myriad data points on what exactly the doctor did, how he did it, how satisfied the patient was with the treatment, and so on. That means still more forms to fill and boxes to check.

The idea was that Medicare would reimburse doctors partly based on their performance. The problem is that measuring the quality of something as complex as health care through a bureaucratic apparatus imposes a heavy administrative burden, and in the end doctors are still complaining the data points don’t actually reflect how good they are at their jobs.

Doctors generally agree they do too much paperwork, but they share much less common ground on possible solutions.

These so-called quality measures consume more than two hours a day per physician and over $15 billion a year, according to a study of practices in four common specialties published in the journal Health Affairs in March.

Private insurers are now jumping on the quality measurement bandwagon, too, Tennant said.

In addition, there are the demands required by the Health Information Technology for Economic and Clinical Health Act (HITECH), which President-elect Barack Obama had inserted into the 2009 economic crisis stimulus package (called the American Recovery and Reinvestment Act).

The HITECH act requires the use of electronic health records (EHR) in order to receive full Medicare reimbursement. The idea was to make doctors digitize their patient records. Obama promoted it as a way to “cut red tape, prevent medical mistakes, and help save billions of dollars each year.”

The law promised $44,000 and in some cases $63,750 to every physician that adopts a government-approved EHR system and proves putting it to “meaningful use.” Even though the grants usually don’t cover the whole cost of EHR, a majority of doctors have jumped on board, since those who don’t comply see their Medicare reimbursement cut by 3 percent.

The administration then released over 1,000 pages of regulations on what constitutes “meaningful use” of EHR.

Doctors now complain en masse that a lot of the information they are forced to enter into the EHR system is useless and detracts from face-to-face time with patients.

For every hour physicians tend to patients, nearly two more hours are spent on EHR and desk work, based on a study of 57 U.S. physicians published on Dec. 6 in Annals of Internal Medicine.

Doctors generally agree they do too much paperwork, but they share much less common ground when it comes to proposing solutions.

Suggestions vary from going full government—Medicare for all—to going full private, where patients pay doctors upfront and those who can’t afford to pay depend on charity.

Price may cut some regulations, but Americans will likely continue with the complex private-public hybrid of a health care system, leaving much of the bureaucracy in place.

That’s one of the main reasons why almost half of physicians feel burned out and nearly half plan, in the next three years, to serve fewer patients, switch to direct pay (concierge) practice, seek hospital employment, or leave the profession altogether, according to a 2016 survey of over 17,000 doctors, conducted on behalf of The Physicians Foundation.

Each demand by bureaucracy on physicians is made with good intentions, but as those demands pile up, they are changing the practice of medicine, adding another element to a brewing health care crisis.