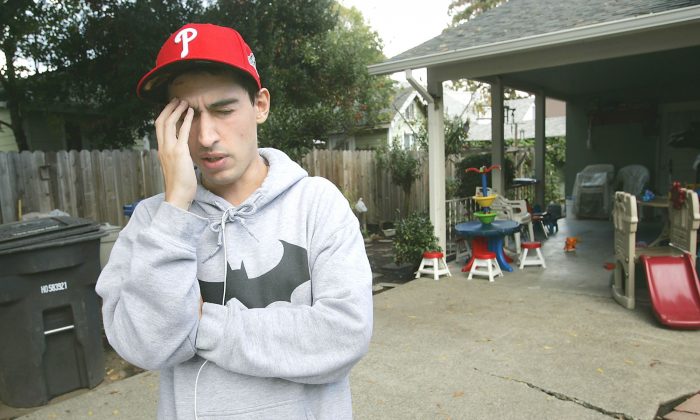 In a Nov. 2, 2015 photo, college student Luis Ortiz pauses while describing the night he ended up in the Queen of the Valley Medical Center earlier this year. Ortiz says he went to the emergency room in early September with a terrible headache and nausea, became comatose and when he woke up doctors told him he had a tapeworm larvae living in his brain and required immediate surgery. The surgery and the aftermath have greatly impacted his life, said Ortiz. (J.L. Sousa/Napa Valley Register via AP)
US

"I was shocked"
By Jack Phillips

After suffering severe headaches and vomiting, a California man was told by doctors that he had a live tapeworm living inside of his brain.

Luis Ortiz, 26, was rushed to the hospital after blacking out. After an X-ray, doctors saw that his brain was swelling and that there was a worm inside of a cyst, reported the Los Angeles Times. A surgeon managed to perform a complicated and delicate surgery to get rid of the cyst.

It’s not clear how Ortiz’ brain was infected with a tapeworm, but there’s a good chance it came from something he ate. The parasite then moved from his brain to another part of his body. Ortiz underwent rehab and cognitive therapy, and he was released from the hospital.

“It was still wiggling and moving around,” the Napa man told the Times.

Doctors couldn’t say how long the tapeworm was living inside of his head.

CA man went to ER with headache; was told tapeworm larva had been living in brain https://t.co/q0ysveRZov pic.twitter.com/D4PhVkrpKW

“I was shocked,” Ortiz was quoted as saying. “I just couldn’t believe something like that would happen to me. I didn’t know there was a parasite in my head trying to ruin my life.”

His sugeon, Dr. Soren Singel, said it was a “close call” for Ortiz, describing him as lucky to be alive.

Ortiz said, “The doctor pulled it out and he said it was still wiggling…what are the odds I’d get a parasite in my head?” according to the Independent. “My memory is like a work in progress,” Ortiz said. “It gets better from therapy”

Last year, it was reported that a man had a tapeworm living in his brain for four years. He suffered a slew of medical problems as a result.

“During a biopsy they actually pulled out a small globular object and the pathology department identified it as a worm,” doctors said at the time, per the Times.