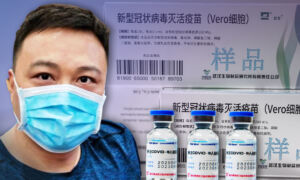 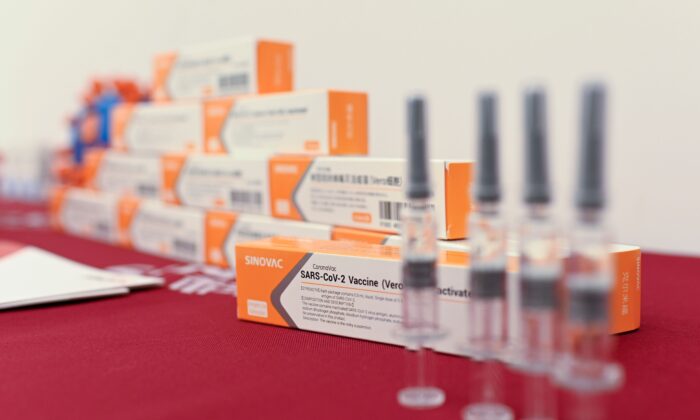 Sinovac Biotech vaccines, one of 11 Chinese companies approved to carry out clinical trials of potential coronavirus vaccines, are displayed at a press conference in Beijing, China, on Sept. 24, 2020. (WANG ZHAO/AFP via Getty Images)
INSIDE CHINA

The Chinese regime has been implementing mass vaccination since the start of this year and has mandated millions to be injected with homegrown COVID-19 vaccines. Beijing’s municipal government is pushing for the second round of inoculations.

However, some doctors and residents told The Epoch Times that they don’t trust the Chinese-made COVID-19 vaccines as they question the government’s fervent promotion of these products.

The efficacy and safety of Chinese-made COVID-19 vaccines have been questioned, due to the government’s lack of transparency in providing the necessary clinical datas. CoronaVac, a vaccine developed by Beijing-based drugmaker Sinovac Biotech, has been tested by the Brazilian Butantan Institute and found that its effective rate is only 50.4 percent, far lower than the 78 percent effective rate claimed by the Chinese manufacturer.

In recent years, a series of vaccine scandals in China have been widely reported by the media worldwide.

According to state-run media Xinhua, the first dose of Chinese vaccines were administered to more than 1.9 million residents in Beijing earlier this month; and the second round of vaccinations began on Jan. 22, and is scheduled to be completed before Feb. 8.

Dr. Wang, a resident of Beijing, told The Epoch Times on Jan. 25 that Chinese-made vaccines are dangerous and he and his family will definitely not get inoculated with it.

He noticed that in other countries, elderly people who are high-risk are given priority to receive the COVID-19 vaccine; while in mainland China, young people get vaccinated first.

Dr. Wang pointed out that Chinese authorities had changed the COVID-19 vaccine restrictions. “In the early days, children at several kindergartens received vaccination. And later it was announced that people under 18 and over 59, and people who have other diseases should not be vaccinated for the time being. Why did the authorities make such changes?”

He believes that authorities are just trying to get more people vaccinated by targeting certain age groups. “Maybe because they are afraid that if the elderly people have adverse reactions after the vaccination, then people around them will be reluctant to get vaccinated. So, they first administer the vaccines to the age groups that are less likely to have bad reactions. This shows that the safety of the Chinese vaccines is problematic. The authorities themselves do not have confidence in the vaccines.”

Dr. Wang added, “[The Chinese regime] does not disclose trial data and covers up everything. This government is the kind that has done too many bad things. It must be well prepared [to cover things up]. In other countries if there are problems with vaccines, the media will report and third-party agencies will investigate. The problems occurring in mainland China will not be reported. As soon as you post it online, it [the government] will  delete it, and the control of speech has become stricter.”

A retired doctor surnamed Xia from Chaoyang district of Beijing told The Epoch Times that none of the doctors she knew would get vaccinated with homegrown vaccines. “I definitely will not be injected with these vaccines,” she stressed.

A resident surnamed Zhao of Shijingshan district of Beijing, told the publication that he learned from an insider within the Chinese Communist Party (CCP)’s system that the regime requires 90 percent of people to be vaccinated. He expressed his distrust towards the mass vaccination and the Chinese regime.

“What’s behind the vaccination is questionable. I think it is very, very scary and unpredictable. It is scary whether the [Chinese] vaccine is real or fake. … [If it is a real vaccine] they [the CCP] pushed it out very quickly. It means that it was researched and developed before the epidemic broke out, and it is an action pre-arranged systematically. If the vaccines are fake, it’s also terrifying, how many people will be harmed [by it]? Anyway, our society is a terrifying one.”

Zhao heard that some people have refused to be vaccinated. His advice for everyone in the mainland is to “avoid being vaccinated as much as possible.”

Zhao also mentioned that there have been many incidents of faulty Chinese vaccines involving children in mainland China. He has been in contact with some of the victims’ parents who have been petitioning to get justice for their children. However, he believes that the Chinese-made COVID-19 vaccines are “likely to have defects, and they are much more dangerous [than the faulty vaccines injected into those children].”

Hong Ning and Zhang Yujie contributed to this report.