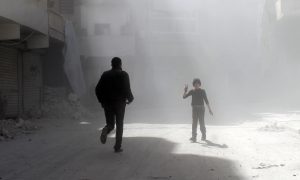 Doctors and Patients Are Targets in Brutal Syrian War

After four years of hostilities, the Syrian war doesn’t show any signs of abating, and the needs for all kind of assistance grow more urgent every day. The situation is even more complex as medical and paramedical personnel have become targets of repression by the government. As a result, thousands of physicians have left the country and those still there face great challenges in providing health assistance to the population.

Due to the government tactics of placing huge communities under siege mean that doctors have to struggle to provide health care to the population, frequently running out of essential drugs and basic medical supplies. To make matters even more complex, some suppliers refuse to sell essential materials such as gauze or surgical threads for fear of being arrested or shut down for supplying basic elements to a besieged area, as reported by Médecins Sans Frontières (MSF—Doctors Without Borders). A doctor reported to MSF, “It is precious, dangerous, incriminating. There are secret outlets supplying us with gauze.”

Because hospitals have undergone sustained attacks from airstrikes and barrel bombs, many of them have to operate below ground level. Some patients—particularly those under stable conditions—are kept at ground level and are moved to the basement once the shelling restarts. At least 610 medical personnel have been killed, and there have been 233 deliberate or indiscriminate attacks on 183 medical facilities, according to the report “Doctors in the Crosshairs: Four Years of Attacks on Health Care in Syria,” released last February by Physicians for Human Rights.

In July 2012, the Syrian government passed an antiterrorism law that made it a crime to provide medical care to those presumed to be supporting the rebels. In addition, regime thugs regularly hunt the hospitals looking for rebels interned there who were fighting the government.

Physicians for Human Rights also reports that the Syrian government is responsible for 88 percent of the recorded hospital attacks and 97 percent of medical personnel killings, as well as of 139 deaths directly attributed to torture or execution. As a consequence of this violence against them, an estimated 15,000 doctors have fled the country in the past three years. This number represents almost half of the certified physicians in a country whose health system was once one of the most advanced in the Arab world. In Aleppo, a city with a population of 2.5 million, only 250 doctors remained out of 6,000 the city once had in July 2013.

The war has had devastating effects on the health of the population. More than half a million Syrians have suffered serious injuries that will demand long-term care, and outbreaks of communicable diseases have increased significantly. Some chronic conditions such as diabetes and kidney and heart disease that could be managed under normal conditions are now escalating into life-threatening illnesses. According to some estimates, 200,000 people have died in Syria because of a lack of adequate and timely medical care.

Amnesty International has reported another disturbing finding: the abuse of patients by doctors and medical personnel. “It is deeply alarming that the Syrian authorities seem to have given the security forces a free rein in hospitals, and in many cases hospital staff appear to have taken part in torture and ill treatment of the very people they are supposed to care for,” stated Cilina Nasser, Amnesty International Middle East and North Africa researcher.

Amnesty International researchers have found that several patients had been assaulted by medical staff, health workers, and security personnel in hospitals in Banias, Homs, and Tell Kalakh, as well as in the military hospital in Homs. One doctor at this hospital told Amnesty International that he had seen four doctors and more than 20 nurses abusing patients, a flagrant violation of medical ethics and humanitarian behavior.

“The Syrian government has targeted health care and increasingly used it as a weapon of war to destroy its opponents by preventing care, killing thousands of civilians along the way,” states Physicians for Human Rights.” It is a miserable record for the Syrian government, one for which one day it will have to answer.