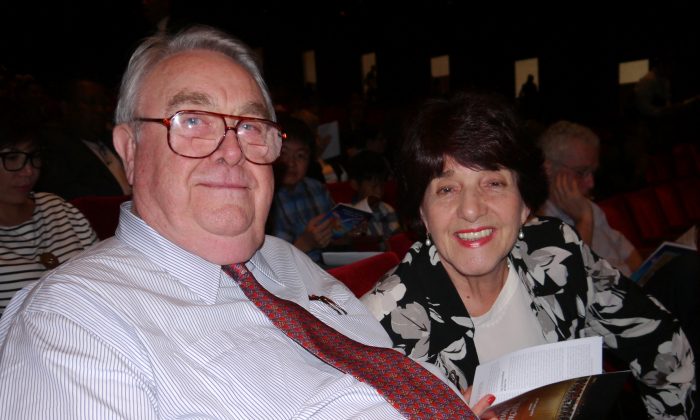 Dr. Robert Battle and his wife enjoying an afternoon listening to Shen Yun Symphony Orchestra at the Jones Hall for the Performing Arts in Houston. (Sarah Guo/Epoch Times)
12- OBSOLETE

“I saw the majestic mountains, I climbed to the forest, and I saw a wonderful, wonderful feeling of beauty of nature,” Dr. Battle said at the Jones Hall for the Performing Arts in Houston Sunday afternoon.

A number of the orchestra’s original compositions were first performed in Shen Yun Performing Arts, where they initially accompanied traditional Chinese dance.

“I love the way they were blended. They were very, very nice,” Dr. Battle said. “I love the orchestra, wonderful. From one end to another, they were just extremely professional.”

Dr. Battle, who opened his clinic, Comprehensive Health Center, in 1988, has served his community as a Rotarian, United Fund Director, and as a Director of the Texas Heart Association. He attended the performance with his wife Mrs. Cecilia Battle, a retired teacher.

Mrs. Battle said it was a “beautiful performance—it’s fantastic, interesting, and the sound is just perfect.”

At intermission, Dr. Battle added that the three conductors, he had so far seen, were a joy, and he lauded Shen Yun’s “fresh pieces” of original music.

“I thought it was wonderfully done, and each one of them had a beautiful taste of its own,” Dr. Battle said. “Wonderfully smart, excellent music.”