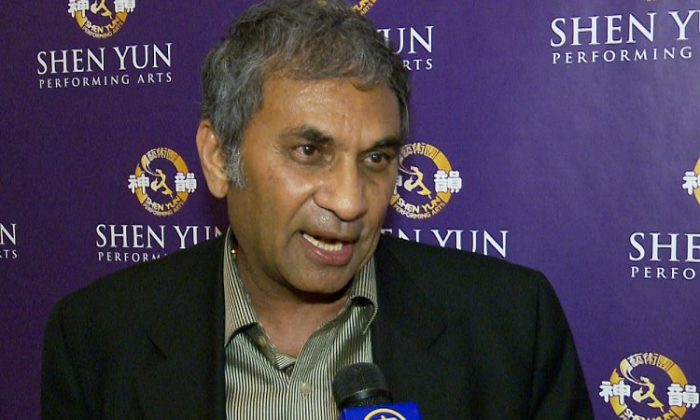 NEW YORK—Dr. Dilip Doctor has seen a huge number of performances, yet none have ever reached the level of Shen Yun Performing Arts.

The doctor saw the New York-based company, which tours the world with the mission of reviving the 5,000 year-old, thought to be divinely inspired Chinese culture, at Lincoln Center on Friday.

“I my entire life, I have never seen anything so spectacular, so beautiful, and so marvelously done theatrical performance,” Dr. Doctor, originally from near Mumbai. “I have seen thousands of them. This one tops the list.”

“After more than 60 years of Communist rule in China, and especially after the Cultural Revolution, Chinese traditional culture has been all but completely demolished,” states Shen Yun’s website. “However, the deeper spiritual core of the ancient culture, with its values of benevolence, honor, propriety, wisdom, and sincerity, as well as a reverence for the gods and the heavens, cannot be destroyed.”

Shen Yun was formed six years ago to revive this culture and its values through performing arts, according to the company’s website. Classical Chinese dance, one of the most comprehensive dance systems in the world, is at the heart of the performance; dancers are adorned with handcrafted, colorful costumes, and accompanied by digital backdrops and an orchestra that melds both Western and Chinese instruments.

“If Buddha ever saw this performance he would love to come back to life and come to watch it himself,” said Dr. Doctor, who brought 10 people with him on April 20.

Shen Yun’s beauty at the surface level is stunning, yet “digging deeper, one discovers a sea of traditional Chinese culture,” explains the company’s website. “Mortals and divine beings merge on stage as one. Principles such as benevolence and justice, propriety and wisdom, respect for the heavens, and divine retribution, all come to life, washing over the audience. Originating from Confucianism, Buddhism, and Taoism, these ideals are the essence of traditional Chinese culture.”

Dr. Doctor had kind words for the performers of Shen Yun, saying, “God bless those guys and girls [in] the incredible performance.”

Shen Yun has an all new program each year. Mr. Doctor said every time Shen Yun performs again at Lincoln Center, he will be there.

“I will have memories for the rest of my life,” he said. “I will be back forever.”

Dr. Doctor’s companions were also struck by the performance.

“It is a super show,” said Dr. Sudhir Parikh, a famous physician and community leader. “It is a super exhibition of the Eastern culture. We really loved it. It really shows how good [is] victorious over evil.”

Dr. Parikh said he will recommend the great show to everyone and encourage them to see it “again and again.”

Dr. Doctor said the whole group who accompanied him would come back many times.

“All of us will go home with the memory of an incredible performance, a masterpiece performance by each and every artist, that we will remember for years to come,” he said. “And we will all be back again and again.”