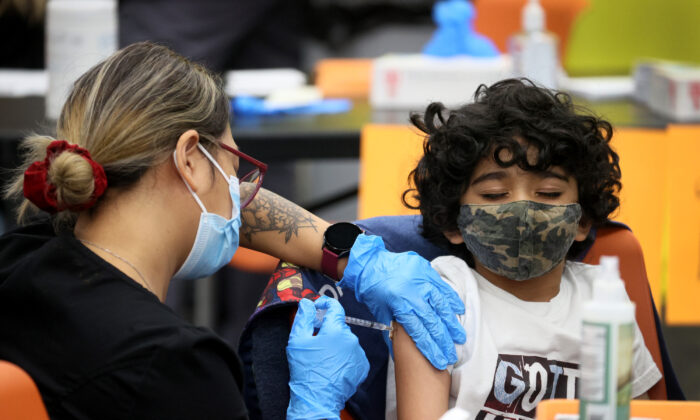 'The first thing you look at is risk-to-benefit ratio, and the risk of the vaccine far outweighs the benefit.'
By Patricia Tolson

On June 18, Rochelle Walensky, director of the U.S. Centers for Disease Control and Prevention (CDC), “endorsed the Advisory Committee on Immunization Practices’ (ACIP) recommendation that all children 6 months through 5 years of age should receive a COVID-19 vaccine.”

However, another doctor is issuing a warning about the risks of vaccinating babies.

According to Dr. Syed Haider—an internal medicine specialist and founder of mygotodoc.com—”the risk of the vaccine far outweighs the benefit.”

As The Epoch Times reported May 26, Haider has focused on the prevention and treatment of the CCP (Chinese Communist Party) virus through his online initiative by providing easy online access to off-label prescriptions such as ivermectin, hydroxychloroquine, budesonide, and protocols for COVID, long-COVID, and vaccine injuries.

Haider began this journey in December 2020, after realizing that the United States had offshored almost all prescription drug manufacturing to unfriendly nations like China.

According to Haider, dissenting voices in the debate over how to manage and treat the CCP virus have been muzzled and censored from the very onset of the pandemic and they are now being threatened with the loss of their medical licenses. Because of this, Haider has had to retain an attorney.

Despite the threats, Haider said he refuses to remain silent when the government issues a recommendation that children as young as 6 months old be vaccinated for a disease that poses little, if any, threat to their lives.

“Whenever you are evaluating whether or not to carry out a medical intervention the first thing you look at is risk-to-benefit ratio,” Haider told The Epoch Times, “and the risk of the vaccine far outweighs the benefit.”

As Haider explained, “the supposed benefit of the vaccine is that it’s going to prevent COVID, reduce the severity of COVID, and prevent you from dying of COVID.”

According to Haider, “the risk of COVID in children is zero.” Data released by the CDC seems to confirm his opinion.

According to the latest data from the CDC, 431 children—newborn to age four—have died of COVID. Conversely, the deaths of more than 1 million people over the age of 19 have been attributed to COVID, and 521,293 of those were older than 75.

When asking what really caused the deaths in children diagnosed with the CCP virus, the answer will depend on who is speaking.

The Mayo Clinic says “babies under age 1 might be at higher risk of severe illness with COVID-19 than older children.” Johns Hopkins University says “COVID-19 symptoms in kids and babies are generally milder than those in adults, and some infected children may not have any signs of being sick at all.”

The CDC says that while serious cases have occurred, the majority of newborns who test positive for the CCP virus have only mild symptoms or none at all and they recover from the illness.

“Maybe you can say one in a million or one in ten million children might die of COVID,” Haider said. “But even then it may not have been COVID. It’s usually that they die of something else, they had cancer or some other autoimmune disease, something else serious that killed them. It wasn’t COVID itself.”

A 2020 report by the CDC showed that nearly three-quarters of COVID-associated deaths among infants, children, adolescents, and young adults have occurred in patients aged 10 to 20 years old, with a disproportionate percentage among young adults aged 18 to 20 years and among Hispanics, blacks, American Indians, Alaska Natives, and those with underlying medical conditions.

In another 2020 report by the CDC, 75 percent of those under 21 who died of the CCP virus “had underlying medical conditions, such as asthma, obesity, neurologic/developmental conditions, and cardiac conditions.” Virtually all of the pediatric deaths “met the COVID-19 case definition” and 12 percent “met the multi-inflammatory syndrome in children.”

‘Problems With the Trials’

According to Haider, there are also “a number of problems with the trials.”

As Haider explained, the serious adverse event rate in the trials was one out of 71 children, but the trials were too small to evaluate whether any children would have been prevented from dying. The data from the Pfizer trial (pdf) showed there were 5,000 child participants, and the trial was stopped after two shots based on the assumption that these would be effective.

But once the researchers actually ran the numbers and got the final efficacy numbers, they realized it was not effective.

“They had already unblinded the trial and vaccinated about 58 percent of the placebo group. So you lost the placebo group,” Haider said. “It’s no longer a randomized trial. It’s no longer double-blinded. Then they decided to extend this complete sham of a trial and give it a third dose. Throughout the trial, for all of the efficacy numbers they report at 80 percent efficacy in the Pfizer trial seven days after the third dose, and that’s based on 10 cases of COVID-19, seven in the placebo group and three in the vaccine group. The problem with all of their efficacy numbers, including this 80 percent number, is that none of them are statistically significant.

“Remember, one in 70 children had a serious adverse event in the trial,” Haider reiterated. “This is the best possible data Pfizer can present? I am sure the actual adverse event rate is far higher and the actual efficacy is far lower. They fudge the numbers. A court is going to have to order the release of the actual documents, just like they had to order it for the adult trials. Then we’ll know the truth. We’re now finding the truth about the adult trials and we’re discovering it was never actually 95 percent effective.”

According to a report by The New York Times, efficacy and effectiveness are related to each other, but they’re not the same thing, and it’s crucial not to mix them up.

“Efficacy is just a measurement made during a clinical trial,” Naor Bar-Zeev, an epidemiologist at the Johns Hopkins Bloomberg School of Public Health, told The New York Times. “Effectiveness is how well the vaccine works out in the real world.”

According to Toby Rogers of Children’s Health Defense, “Pfizer’s manipulation and misrepresentation of its Phase 2/3 clinical trial date for COVID-19 vaccines for kids under 5 is dishonest and unethical and makes the data functionally useless for making decisions.”

In an article posted to the Children’s Health Defense website, Rogers said Pfizer began vaccinating the placebo group in the children’s vaccine trial “to destroy the control and eliminate any long-term safety data.”

Then in early December 2021 when the data showed the trial had failed, Pfizer enrolled more children to administer a third dose in an attempt to save the trial, Rogers said.

“It was always probably around 20 percent at best, if not negative efficacy,” Haider insisted, “and that was based on examining the data Pfizer actually collected and now people are going back and looking at it and seeing Pfizer was not being honest with us. They weren’t being open. They didn’t show us everything that they knew. So I have serious reservations about these vaccines.”

The Epoch Times has reached out to Pfizer for comment.

“People need to wake up,” Haider warned. “The phones of congresspeople should be ringing off the hook. We should be demanding that this stop. People need to be marching in the streets. Unfortunately I feel like I’m preaching to the choir because the only media outlets that give me a voice are outlets that people go to who already mostly agree with what I’m saying. But that choir needs to get out into the streets and raise hell until people wake up. We’re standing by and allowing a genocide. We have to stop mincing words. Luc Montagnier, before he died, warned [about] antibody-dependent enhancement.”

Montagnier, the late French virologist who won the Nobel Prize in 2008 for his work identifying HIV as the virus that causes AIDS, said in May 2021 that the COVID-19 vaccines were creating the variants and leading to a condition called antibody-dependent enhancement (ADE).

As Haider explained, the way ADE works is the first time a person is exposed to the infection after getting the COVID vaccine, they may be OK with it. The second time, they might feel a little worse. The third time is when the ADE really kicks in. After the third exposure, they may have a more enhanced infection because of the unnatural vaccine antibodies.

These antibodies actually trigger a worse infection, and that’s the greatest risk here, he said.

Haider said that in all vaccine trials ever performed on animals, all of them ended up with ADE enhancement, and repeated exposure to the infection they were vaccinated against eventually caused all of them to die

“This is the first coronavirus vaccine trial in human beings, and even though we’ve gotten rid of the placebo group in all the trials, it’s still a trial,” Haider asserted. “The trials are over and there are so many problems with the children’s trial. It’s so egregiously wrong. The adult trial was bad to being with, but not near as bad as this one.”

Haider is also aware that social pressure to vaccinate babies is strong.

“I would just tell people to imagine lemmings running off the cliff and you’re one of them,” he said.

What are the chances of a child actually dying from the vaccine? Haider said some estimates are as high as one in 100. Some are as low as one in 1,000.

“Let’s say someone puts a gun to your child’s head and says there’s a one in 1,000 chance that when I pull the trigger, I will kill them,” Haider suggested. “We have to reframe the discussion for people to try to kick them out of this trance they’re in. In a just and sane society, we would be removing children from these parents or putting the parents in jail, and the doctors in jail, and the Pfizer executives and most of the White House and everyone at the CDC in jail.”

“The evidence is there,” Haider insisted. “It’s staring people in the face. You don’t even have to say there’s a conspiracy. The data speaks for itself.”