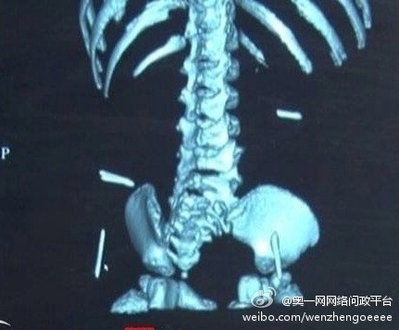 Several rusty sewing needles were found in the body of an eleven-month-old girl in China’s Jiangsu Province, Aug. 6, 2013. (weibo.com)
China

Doctors removed sewing needles that had been intentionally pushed into the body of an eleven-month-old girl in China’s southern Jiangsu Province. Some netizens blamed the cruelty on the effects of China’s one-child policy.

One of the needles was broken into two pieces. The surgery was very risky since the needles were moving around inside the girl’s body and could easily have hurt her internal organs, the surgeon said. The needles had become rusty from being inside the body for a while.

The director of the pediatrics surgery department said that the needles had intentionally been inserted into the body. The child’s family did not want to comment, and the hospital had informed the police, the report said.

In a recent report about the enforcement of the one-child policy, a woman from Anping Town in Hunan Province is said to be suffering from mental disorders after having been forced to undergo an abortion during her seventh month of pregnancy in November 2011.

According to the woman’s husband, who posted their ordeal online, the doctor dropped the aborted fetus, which was breathing, into a plastic bag in front of the mother. He then paid a cleaning woman 80 yuan (US$13) to bury it.

Translated by Pingping Yu. Written in English by Gisela Sommer.