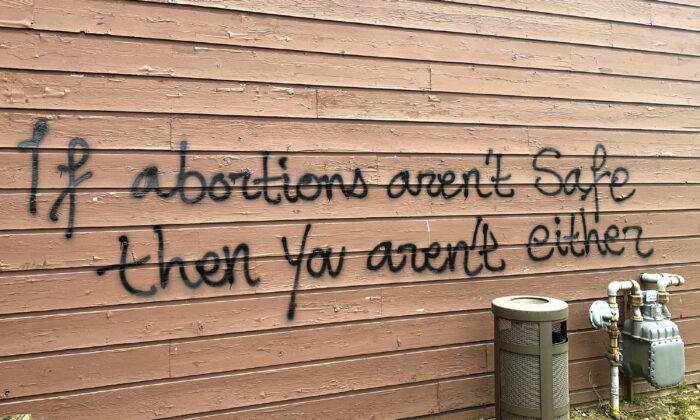 Threatening graffiti is seen on the exterior of Wisconsin Family Action offices in Madison, Wis., on Sunday, May 8, 2022. (Alex Shur/Wisconsin State Journal via AP)
Viewpoints

The most charitable interpretation of the gambit by a still-unnamed individual to leak Justice Samuel Alito’s draft Dobbs opinion is that the leaker felt it to be his or her righteous duty to destroy justice in a desperate bid to “save” it.

Regardless of whether done under a perverse sense of good faith, or bad, the despicable deed transcends the damage in wrecked “norms,” and with it, the erosion of trust within and integrity outside the highest court in the land. In effect, it served as a naked act of intimidation, predictably fueling a mob aimed at making judges rule based on the threat of force over reason.

The leaker not only irrevocably damaged the Supreme Court but also struck a blow for mob rule over the rule of law—and therefore against justice and civilization itself.

And all in response to a pending decision that would overturn what even leftist luminaries such as the late Justice Ruth Bader Ginsburg consider to be a dubious one in Roe v. Wade, perversely inventing a right to abortion where there was none, without the consent of the governed, that enabled the termination of tens of millions of lives.

Now, to be fair, the Long March to corrupt the Supreme Court has proceeded for years, paralleling the left’s Long March through every other institution. The march of which we speak is distinct from the jurisprudence of the left’s increasingly radical nominees. Democrats had already engaged in “Borking,” the high-tech lynching of Clarence Thomas; the Kavanaugh caper; threats of court-packing and blowing up the filibuster; and high-tech lynching 2.0 against the Thomas family this year. They have been content to engage in the politics of personal destruction, at times in racially tinged form, and accused nominees of the most abhorrent of crimes without evidence, to compel them into submission. Hence, the hatred above all of Justice Thomas, who has never given an inch.

But the Dobbs leak represents an all-new low because it’s such a unique assault on the high court’s ability to conduct its business of deliberation insulated from the figurative political mob. In fact, it helped unleash a literal one. Judges have made decisions that on the merits seem political—think making Obamacare’s individual mandate a tax, and other Roberts court mischief—but never have they faced such throngs of enraged people, threatening bodily harm right outside the doors of their homes, while a decision was pending, and on the basis of a leaked draft opinion.

If it wasn’t already clear, it should be abundantly so now: There is no institution too hallowed for the left to spare, or tactic too low. The left wants it all, and it will stop at nothing to take it. This is precisely what time it is, and those who don’t recognize it are doomed to succumb to its depredations.

Think about some of the precedents the leak has set, and questions it has raised.

How can judges ever believe their work will be kept private again—a working assumption essential to keeping the judicial branch free and independent?

How can the court proceed given the lack of judgment demonstrated by the official who hired the leaker—presumably the justice on whose staff the leaker worked?

What could said justice do to ever reinstill confidence that he or she is treating his or her office with the sanctity demanded of it? How could we ever trust said justice’s judgment?

And how can we possibly ever deter an act like this in the future?

The injustice at play is compounded by the Biden administration’s egging on of the angered protesters outside judges’ homes—a violation of law, and of the kind of the administration would scream “insurrection” about if its political opponents were doing it.

Biden’s Justice Department remains largely mum—the same one that, according to whistleblowers, pursued parents critical of the public school establishment like terrorists.

Antifa targets pro-life activists with Molotov cocktails, but we hear not a word today about how our democracy is under threat.

One of the precious few times that, over five hours on Jan. 6, 2021, several hundred of the left’s political opponents act like the left, the left launches a full-blown Domestic War on Wrongthink. When Democrat allies burn cities and attack cops, the perpetrators largely walk, and Democrats defund the police and apologize for America’s evil.

The hypocrisy is the point. So, too, is the projection.

As for the chief justice, he has always claimed to care above all about preserving the institution of the court.

How can he possibly make the claim he is doing so while presumably sitting on the court’s decision?

With each day that passes, so too does the chance that something horrible happens.

And the longer the court withholds the decision, the more questions there could be about whether the intimidation in the interim worked.

Could the language in the final opinion shift? What about the votes? Improbable maybe, but not impossible.

Sure, the chief justice would say he didn’t hand down the decision in the immediate wake of the leak because the court wouldn’t be bullied into acting, but again, look at what we’re witnessing in real-time: attempted mob justice.

Had he handed the decision down the day after the leak arose, that might have been the only deterrent to future such behavior—that the work of the court wouldn’t be impeded, and then that the leaker would be brought to swift and overwhelming justice.

Recall the duress under which jurors operated in the Derek Chauvin case, and the threat of chaos on the streets should it not have been decided “rightly.”

Recall again the Black Lives Matter riots of the summer of 2020.

Recall the tenants in cities across the country who boarded up their windows before election night that year, anticipating what would happen if the mob didn’t get its way.

Add to it the advent of a Ministry of Truth, part and parcel of the War on Wrongthink, and we see that force in the way of censorship and violence is all the left has left.

Our civilization is on fire, and the arsonists want us to believe it is their critics who are to blame.

Among the most prominent of these arsonists now is the Dobbs leaker.