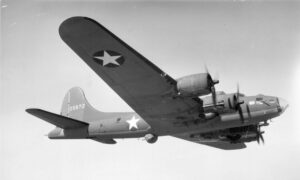 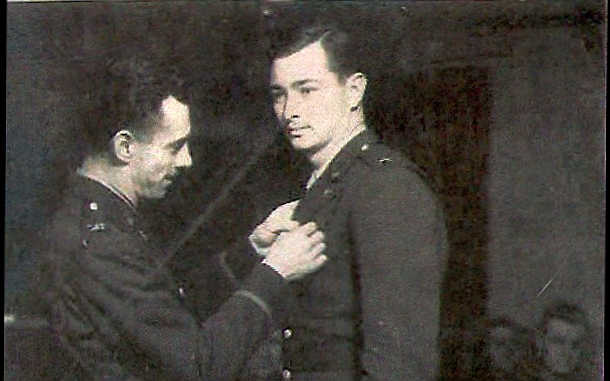 Do You Have His Medals?

He was six-foot-four-inches tall. Born May 11, 1919, in Houston, Texas, Harold Johnson would have been a giant among the English during World War II. This American war hero gave his medals to a little boy who sat next to him on a train on the first leg of his journey home from England. He completed 40 missions navigating B-24 bombers over Germany and France. That was the ticket home for U.S. Army Air Corps flyers. He died in a tragic road accident on June 11, 1951, leaving his wife and three young daughters without their father. His now grown children would like to find that little English boy.

To learn more about her father’s war service, Mary Lou Johnson Ridinger recently toured the 390th Memorial Museum in Tucson, Arizona. Mary Lou and her late husband Jay George Ridinger rediscovered Mayan jade in the jungles of Guatemala 40 years ago. Tall, blonde, and Texan Mary Lou makes the same impression on diminutive Guatemalans her father must have made on the English decades before.

Mary Lou described how the Johnsons got to Texas, saying great-grandfather Peter Johnson emigrated from Denmark in 1870. He landed in Galveston. That was the port of entry for Danish ships.

“There were a lot of Danish immigrants in Texas. Towns had newspapers printed in Danish and Norwegian. Great-grandfather likely was a farmer. Grandfather Fred Johnson was a Houston city slicker who married Florence Smith from Texas. I have a feeling my grandmother invented her own first name, Florence, Florence Smith. Smith is the most common name in America, Smith and Johnson,” Mary Lou reminisced. Although she lost her father when she was only a young girl, Mary Lou has vivid memories of her dad after he returned from the war.

The family moved to New Mexico when Mary Lou was 2 years old. Mary Lou remembers that her father took them out hunting Indian artifacts. They lived in Albuquerque. The family had an old Spanish ranch near Pecos, New Mexico. “We were only there May through September because of the snow,” Mary Lou explained, the family tale warmed with memories of her father.

“I got to sit on the front fender of the car to open gates. I fell off once. I was about four, four-and-a-half. It was a rich fantasy life for me and my sister Georgie. There was Cow Creek. We had Treasure Island. The water was only one-foot deep but we were sure we were explorers. We’d go to Lookout Point or Treasure Island. The ranch had five cabins. My sister and I have a lot of fond memories.”

For Mary Lou and her sister Georgeann, called Georgie, their memories of dad ended too soon. Their little sister Christina was only 1 ¾ years old when their father was killed in a tragic automobile crash.

“Dad taught me how to ride a bike about a week before he died. We lived in Albuquerque. My sister and I had a room in the attic of the farm. Dad read to us every night. Dad went to law school. He got his law degree one-week before he died. He was 31 years old.”

Every family has memories. Cherished moments that remain. Pictures that linger. Thoughts that seem long forgotten that go away then return at odd times and in different ways. After his return from service, Harold Johnson studied law at the University of New Mexico in Albuquerque. He would sit in a big wing chair. Mary Lou and her sister Georgie perched on the wings of the chair above his head. They brushed his hair while he studied.

Johnson had to quit the University of Texas to enlist for military service in the fall of 1942. He was in flight training when he married on Feb. 12, 1943. After the ceremony, the 23-year-old cadet got on a train to return to flight training in Tucson with the U.S. Army Air Corps. Mary Lou says the choice of the Air Corps may have been because his new brother-in-law and best friend was a flight instructor in Tucson.

It didn’t work out as planned. Johnson washed out of flight school. “He was on his way to becoming a pilot when he pissed off his flight instructor. He then took training to become a navigator. He was sent to North Africa. The Allies had the Germans on the run by then and dad was shipped to Norwich, England a month later,” Mary Lou related.

Describing their visit to the 390th Bomb Group museum in Tucson, Mary Lou says, “When we saw the navigator’s seat on the B-24 in the 390th Museum, it was facing backwards in front of the pilot and co-pilot. On one mission dad got up to talk to the pilot. When he came back his seat was blown to bits.”

Johnson was stationed in Wendling, England. Airmen would take the train into Norwich for rest and recreation. When they did 40 missions they could go home. That was all they had to do, bombing over Germany and France. On July 7, 1944, Johnson got home.

Mary Lou recounted the story of her father’s train ride from Norwich to London. “Dad was so relieved that he’d done his duty and he was going home. He didn’t send a telegram to my mom. He wanted to surprise her. We think he was being sent home the last week in June 1944. He would have gone from Wendling to Norwich then London. A little English boy sat next to him on the train.”

The young lad asked the tall Texan about his medals and whether he’d dropped bombs on Germany. “My father gave the boy his medals. We have a photo of my father being awarded the Distinguished Flying Cross. When he was discharged from service, dad was a captain.”

“That little English boy would be an older man now,” Mary Lou said. Are you the little boy on the train who was given Captain Harold Johnson’s medals? Perhaps his family or friends who may have been told about the encounter so long ago? Please write the editor and let us know. There are three daughters of this war hero who would like to meet you.

John Christopher Fine is a marine biologist with two doctoral degrees, has authored 25 books, including award-winning books dealing with ocean pollution. He is a liaison officer of the U.N. Environment Program and the Confederation Mondiale for ocean matters. He is a member of the Academy of Underwater Arts and Sciences in honor of his books in the field of education. He has received international recognition for his pioneering work investigating toxic waste contamination of our land and water.