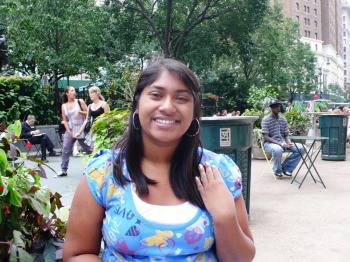 Sweta Satish. (The Epoch Times)
US

Q&A: Do You Feel Safe in the Subway

NEW YORK—With the largest subway system in the world, the city provides New Yorkers with an extraordinarily convenient means of public transportation. However, problems also arise concerning the safety of the subway system. The Epoch Times asked New Yorkers: Do you feel safe on the subway?

Sweta Satish, 16, Student, Jersey City
“Being a student I always have to take the subway, but I don’t always feel safe. When it’s dark, and the lights go off, it’s dark, I feel there’s not much security. If there could be more security officers that would be better.” Sapna Satish, 35, Travel Agent, Jersey City
“It’s scary sometimes. Because sometimes you see people with large heavy bags, and you never know what they are carrying in those bags. Plus, the police don’t check all the bags, they just check some random bags. Even though there are cops at the subway station, but there are not enough in the train, in the car itself. So what if something happens and the train goes wrong, you know. So it’s scary.” Emiliy Polyakovsky, 44, Searching for a Job, Brooklyn
“Because of terrorism and technical problems, I don’t feel safe if it’s an empty station where nobody sits. And I’m against firing people working at the station, you know what I mean. I feel terrible when there’s no human around, only machine.” Richard Gamba, 74, Retired West Side, Little Italy
“It’s safe for me now, but it’s not safe for the young kids. It’s a dangerous at the booth. Because there are no cameras at the booth. … You really have to be careful and watch out.” Spencer Edwards, 37, Attorney, Houston, Texas
“I feel safe, I mean I don’t feel unsafe. You walk around worrying about things that will happen or won’t happen to your life, you just can’t move on with your life. Something happens, you just have to deal with it.” Terry Raymond , 54, Salesperson, Mount Holly, N.J.
As I drive in New York, I hardly take the subway, but when I take the subway, I do feel safe.