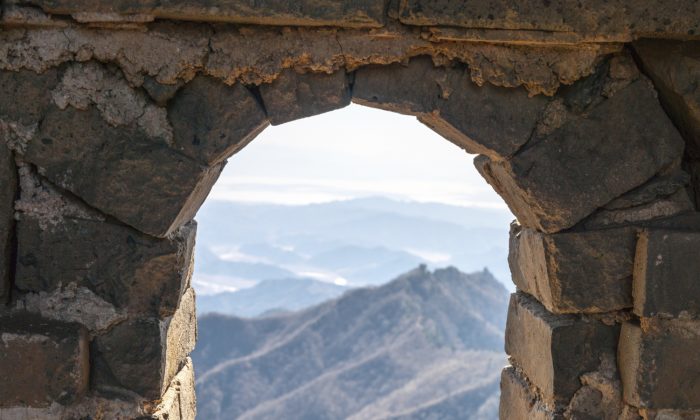 Looking through a window of a watchtower on the Great Wall of China. As soon as soldiers of great courage receive urgent news of an enemy attack, they immediately rush to defend their country, determined to fulfill their duty without hesitation. (Mirko Kirstein/Photos.com)
Chinese Culture

Chinese Idiom: Do What Is Right Without Hesitation (義無返顧)

The Chinese idiom 義無返顧 (yì wú fǎn gù) advises people to “do what is right without hesitation.”

The idiom originates from a passage in the “Biography of Sima Xiangru” (司馬相如列傳), a chapter in “Shiji” (史記), or “Records of the Grand Historian,” written in the early Han Dynasty by the famous historian Sima Qian (司馬遷).

Sima Qian wrote that Emperor Wu of Han, or Han Wudi (漢武帝), once ordered Tang Meng (唐蒙) to construct a key roadway in the Bashu District (巴蜀) leading to the southwestern border of China, in the region of today’s Sichuan Province (四川省).

However, Tang Meng called for many more laborers than necessary and even applied a wartime regulation to have a local leader executed, which led to shock, fear, and riots in the area.

Learning about this, Emperor Wu commanded Sima Xiangru (司馬相如), an accomplished poet, musician, and writer serving in his court, to write an official notice to the people of the area not only to reprimand Tang Meng but also to explain the reason for the road construction.

In the official document, Sima Xiangru clarified that the emperor did not intend to cause disruption in the area or have the leader killed. Rather, the emperor hoped to have the local people’s forgiveness and their understanding and support of the command to construct the road.

Sima Xiangru wrote: “As soon as the soldiers guarding the border receive urgent news of an enemy attack, they immediately take up their weapons and rush to the battleground.

“With great courage, they risk injury from swords and arrows in order to defend their country. Their only fear is that they may fail to serve their country.

“They are determined to do what is right without hesitation. This is because they regard their country’s danger and distress as their own, and make every effort to fulfill their duty as citizens of their country.

“I hope the officials and people of the Bashu District will also regard the affairs of the country as their own affairs and demonstrate their loyalty and allegiance to the court.”

Sima Xiangru’s words greatly influenced the local people, and the road construction was successfully completed as a result.

Sima Xiangru’s words later became the idiom “to do what is right without hesitation.” The idiom is used to refer to the sense of justice, righteousness, duty, and courage that compels one to bravely go forward without a second thought and without looking back.