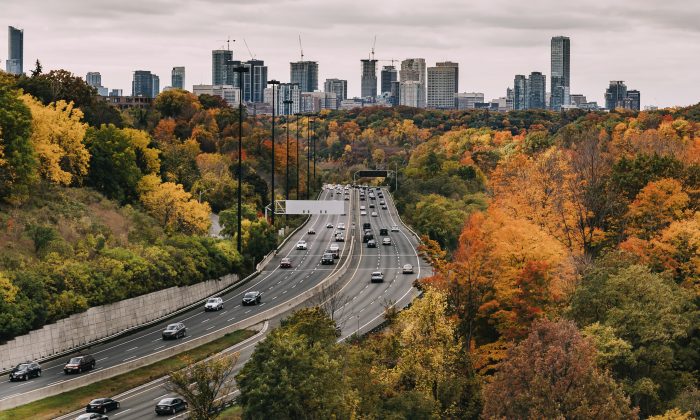 TORONTO, CANADA - 19TH OCTOBER 2014: Cars on the Don Valley Highway in Toronto during the Fall. The city can be seen in the distance.
Environment

Do Trees Really Help Clear the Air in Our Cities?

It may sound like a no-brainer to say that trees improve air quality. After all, we know that trees absorb the greenhouse gas carbon dioxide (CO₂), and that their leaves can trap the toxic pollutants nitrogen dioxide (NO₂), ozone, and harmful microscopic particles produced by diesel vehicles, cooking, and wood burning.

Yet some recent studies have suggested that trees may in fact worsen urban air quality by trapping pollutants at street level. A closer look at the evidence—and how it was collected—reveals the root of this dispute, and can help us come to a more nuanced understanding of the impacts of trees on our urban environment.

First things first; it is not trees that pollute the air of cities in the developed world. As car manufacturers are all too guiltily aware, it is mainly road vehicles that cause pollution. And their impacts are compounded by the choices we make about how and what we drive.

Many features of the urban landscape influence how air moves around a city. Impervious objects like buildings, and permeable ones like trees, deflect air from the path imposed by weather patterns, such as high- and low-pressure systems. The urban landscape turns freshening breezes into whorls of air, which can either contain pollution near its source—where it affects vulnerable hearts and lungs—or lift it away from ground level.

Whether the landscape traps or lifts air will depend very sensitively on the exact positioning of roads, buildings, gardens, street trees, intersections, even billboards and other street furniture.

Trees affect the urban environment in several subtle ways. From altering air flows, to collecting pollution deposits, to affecting the chemical make up of the atmosphere, their impacts are both pervasive and difficult to pinpoint.

As air swirls and twists past the urban fabric, microscopic pollutants can deposit on surfaces. Any surface will do, but trees are especially effective at trapping these particles, because of their large, porous surfaces. One way we can tell whether trees are helping to reduce air pollution is by estimating the mass of pollutant deposited. Experiments to measure depositing pollutants are usually carried out in the middle of flat fields, where it is easier to interpret the measurements. But, of course, a city is a very different environment, and it’s not clear whether these results hold true in highly variable urban settings.

Experimental studies can certainly show that pollution ends up on leaves. But it is no easy task to convert such measurements into an estimate of how the concentrations—that is, the amount of pollutant per cubic meter of air—change. And it is this concentration change that really counts, since we breathe air and—generally speaking—don’t lick leaves.

Some pollutants, like NO₂, are both emitted by human fuel use and produced when chemical reactions take place in the atmosphere. Other pollutants, notably ozone, are only produced through reactions of nitrogen oxides with fumes from oil-based solvents, petrol, and similar chemicals in the air. The production of toxic ozone can happen purely as a result of our consumption of fossil fuels: particularly when hot, settled summertime conditions provide the light needed to kick-start the chemical reactions, while the stillness prevents dilution of the pollution into the global atmosphere.

That said, trees also release chemicals that react with nitrogen oxides to produce ozone, sometimes in sufficient quantity to make a difference, even in urban areas.

Trees also take up space. Parks and gardens are not usually sites with intense pollutant emissions, so they provide an important volume into which pollution can be diluted. This is evidenced by statistical studies, which show how concentrations of air pollutants vary according to the type of urban neighborhood: The decrease of pollutant concentrations away from busy roads is modified by how tall the buildings are in the neighborhood.

Seeing the Wood for the Trees

When assessing research on the effects of trees on urban air pollution, remember that no single study has yet put all the pieces of the puzzle together. With so many processes to consider, it’s little wonder that experiments based in a range of locations, using varying methods, yield vastly different results.

To produce a definitive study, it would take either many months of measurements before and after the planting of vegetation, or a shorter series of simultaneous measurements in two urban locations identical in all respects, except for the presence of trees or some other form of “green infrastructure” in one location. Both approaches are expensive and difficult to undertake in busy cities, which are constantly subject to all kinds of other changes.

Amazon Carbon Sink Is in Decline as Trees Die Off Faster

So, we are left with piecing together the evidence as it is presented to us in reports. When doing so, look first at whether the study is, in fact, concerned with how air is dispersed in urban areas, and remember that such dispersion really depends on every part of the cityscape, not just on trees. Look to see if, and how, removal of pollutants by deposition is considered, and then check whether the study considers the effects of dilution or atmospheric chemistry. Finally, consider the results of any single study in the light of the best available systematic approach to trees in the townscape before drawing conclusions.

Asking whether cities should have trees in it is a bit like asking whether a suit should have a person in it. There is every chance that urban trees could provide a “nature-based solution” to several pressing problems with the urban environment, but perhaps not in the way scientists and policy-makers seem currently to be thinking. Rather than providing a technical fix that disguises our obsession with the diminishing returns of the internal combustion engine, increasing urban tree numbers could change our entire perspective on cities, facilitating the creation of liveable cities that value nature as an integral part of social, economic, and environmental capital.

Rob MacKenzie is a professor of atmospheric science at the University of Birmingham in the U.K. This article was previously published on TheConversation.com