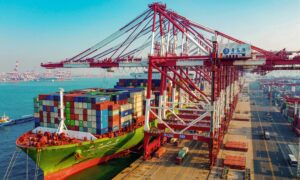 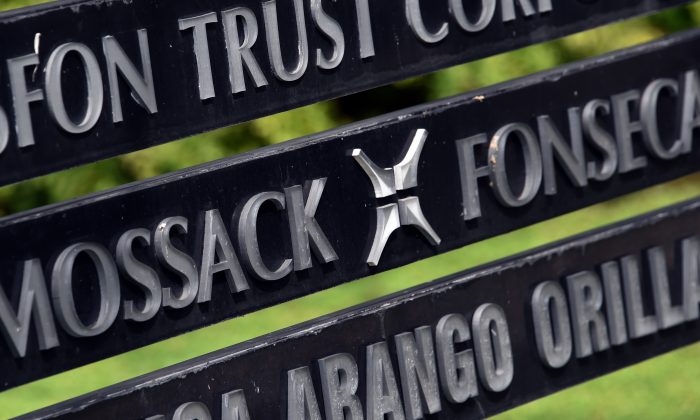 View of a sign outside the building where Panama-based Mossack Fonseca law firm offices are in Panama City, on April 4, 2016. (Rodrigo Arangua/AFP/Getty Images)
Opinion

Still in its earliest stages, the Panama Papers may either continue to cascade, washing away political leaders beyond the hapless Icelandic Prime Minister Sigmundur Gunnlaugsson (who subsequently rescinded his resignation, choosing instead to “step aside” for an undefined interval). Conversely, it could run into the media sands through inability to explain the intricate fiscal/economics to any beyond those with Ph.D.s in economics. Plus the flat, vigorous denials by all and sundry, notably Russian President Vladimir Putin, who claimed the media charges to be a plot against Moscow.

In its basics, however, the Papers are a remarkable illustration of the power of the Internet and the vulnerability of computers even in ostensibly well-protected legal/financial enterprises. Hackers surreptitiously obtained 11.5 million confidential documents from the Panamanian law firm Mossack Fonseca. They provided them to the German newspaper Süddeutsche Zeitung and the International Consortium of Investigative Journalists. One estimate noted the gigantic amount of material included 4.8 million emails, 3 million database files, and 2.1 million PDF files totaling 2.6 terabytes. In contrast, WikiLeaks published 1.73 gigabytes.

We should remember that ‘offshore’ bank accounts are perfectly legitimate—assuming account holders report them and, if required, pay taxes to their national authorities.

One of the most remarkable elements of this exercise is that the leak and ongoing analytic work remained secret for more than a year. It was an exercise in self-discipline that paid off dramatically. The initial publication enmeshed a dozen global leaders present and past to include Argentina’s president, Iceland’s prime minister, Ukraine’s president, the U.K. prime minister, Jordan’s former prime minister, the former Emir of Qatar, the Saudi king, and the UAE’s president. There are friends, relatives, and colleagues of Chinese and Russian leaders. And hundreds of non-A list individuals are also caught in its toils. (Australia reportedly is investigating 800 wealthy for possible tax evasion.)

But what does it mean? And what does it mean for the holders of the countless thousands of accounts in countries such as Cayman Islands, British Virgin Islands, Luxembourg, Hong Kong, Switzerland, and Seychelles? Is future hacker action likely to demonstrate that Mossack Fonseca is only a minnow in this ocean of questionable financial action?

First, we should remember that “offshore” bank accounts are perfectly legitimate. For example, a diplomat in Canada usually has an account in a Canadian bank to pay normal living expenses. Businessmen with regular activity in another country likely have a bank account there. Individuals seeking higher interest rates might bank abroad. The legitimate options are endless—assuming that such account holders report these facts and, if required, pay taxes to their national authorities.

Thus, those who have been “outed” have vigorously and repeatedly denied they have done anything illegal. And only courts, national financial regulators, and political leadership can make final determinations on these professions of innocence.

Particularly in democracies, however, it is perception more than reality that is determinative. In his 2012 U.S. presidential campaign, Mitt Romney’s investments/holdings in countries such as Luxembourg, Bermuda, and the Cayman Islands endlessly damaged him, particularly by enhancing his “fat cat” image when average citizens were struggling with the Great Recession.

Thus it is not surprising that none of the Panama Papers have identified current/past U.S. presidential contenders. Romney provided a salutatory lesson. It would be devastating if Trump, Cruz, or Kasich were revealed as having such accounts. As for Hillary, the Clinton Foundation provides more than enough grist for those criticizing her personal fiscal probity. Moreover, Americans can set up Panama-comparable shell corporations in Delaware, Wyoming, and Nevada.

While kleptocracy is the norm for various African/South American leaders, who seem to believe that he who dies with the most toys wins, it is still shocking for “Western” leaders to be caught up in such activity. Not that Canadian and U.S. history is pristine, as one recalls transcontinental railroad construction where rails could have been gold-plated when considering the costs. Perhaps, just as the poor will always be with us, so will be the corrupt.

Nevertheless, rules can be tightened. One U.S. senator is flogging a favorite pet rock seeking legislation to outlaw corporations with unknown owners; mandate public disclosure of true “beneficial owners”; and push Panama for vigorous legal action against Mossack Fonseca. Of course our 50 states’ “secretaries of state” resist such as they benefit from corporation creation in their states.