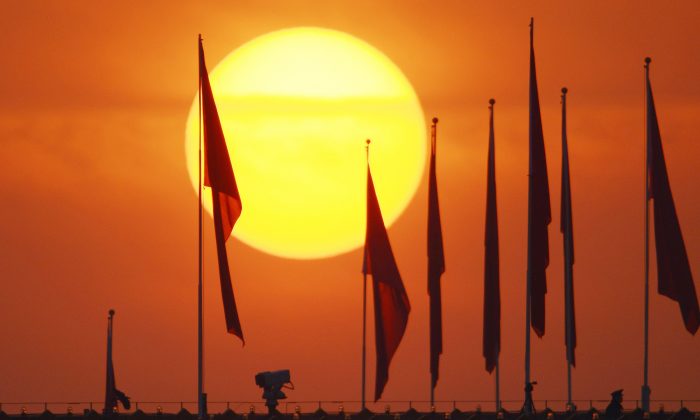 Do the Chinese Communist Party’s New Regulations Make a Case for Dissolving the Party?

When amendments to the disciplinary code of the Chinese Communist Party appeared in regime media on Oct. 21, they caused quite a stir.

The Party regulations, which were amended on Oct. 12, are equivalent in function to the criminal law of the Chinese civil government.

But it was one line in the amended regulations that jumped out, both for official media and for dissidents in exile. It was: “Party Organizations With Large Numbers of Party Members Guilty of Severe Disciplinary Violations To Be Disbanded.”

Political commentators and netizens jumped on the logical implications of the legislation, wondering if that regulation ought to be used to disband the entire Communist Party itself. That this was the intent is far from clear, but commentators could be forgiven for the interpretation: Chinese state media is known to make careful use of headlines and layouts so as to send politically charged messages intended for those well-versed in the ways of the Party.

Sun Guangwen, a retired professor from China’s Shandong University, told Epoch Times that while “disbanding” Party organizations implies surgical operations directed at individual institutions, the infamous corruption throughout the communist regime means that even such a “partial dissolution” would undermine the entire Party structure.

The issue of corruption has been brought to the fore in recent years, as China’s economy reaches an impasse, and with the rise of Communist Party General Secretary Xi Jinping. Coming to power in late 2012, Xi has carried out an anti-corruption campaign against the Chinese officialdom, with hundreds of thousands investigated or punished.

According to political commentator Heng He, the Beijing Youth Daily may have neglected to consider the effects of the paper’s layout on the audience.

Heng He told Sound of Hope Radio that while it is possible for the Beijing Youth Daily to have embellished or played up certain parts of the new Party disciplinary regulations, it would have found no advantage in emphasizing the disbanding of Party organizations.

Heng He believes the general public, which perceives the Communist Party as irrevocably corrupt, either welcomes the idea or recognizes the possibility of institutional change.

Indeed, netizens soon mused about the implications of the Party regulations being carried out to the letter.

“If there are too many Party organizations that need to be dissolved, won’t it mean the end of the Party?” one comment from Sina Weibo, a Chinese social media site, reads. “Can we have this sort of Chinese dream?”

A user called “Drama Army” wrote: “Discipline Inspection Commission, please compile statistics on those Party members that are against the rules and dissolve yourself!”

The Central Commission for Discipline Inspection, headed by Wang Qishan, is the main Party organ responsible for the anti-corruption campaign.

Corruption can’t be solved from the top down, but must come from bottom up, Heng He said, expressing his lack of faith in the Party’s ability to implement meaningful reform despite the scale of Xi Jinping’s anti-corruption campaign.

In his interview, Heng He said that while corruption was manageable in the early decades of communist rule under Mao Zedong, it became commonplace following economic reforms under Deng Xiaoping.

Party officials were given illicit access to the fruits of China’s newfound successes in cheap labor and overseas trade, creating a vicious cycle of increasing graft and embezzlement that thrived under the leadership of the Party faction associated with Jiang Zemin in the 1990s and 2000s.

“In order for Jiang Zemin to secure his power, he not only allowed corruption, but also encouraged corruption and even made it mandatory,” Heng He said.

Jiang held onto political power long after stepping down from his official positions, while maintaining the ideological monopoly the Communist Party uses as its basis for political legitimacy. Xi’s campaign has mostly targeted officials who owe their ill-gotten riches to Jiang’s time in power.

For Xi to remedy this, Heng He said, would be impossible without abandoning the Communist Party and restructuring the political power currently centralized around it. In China, “corruption as well as anti-corruption come from the same source, that is, those with political power.”

“Top-down efforts to curb corruption have never been successful,” Heng He told Sound of Hope. “Corruption has become the motivating factor behind the officialdom; a comprehensive anti-corruption is impossible because everyone is corrupt, 99 percent of them are corrupt. Genuine anti-corruption will only overturn the entire Party.”