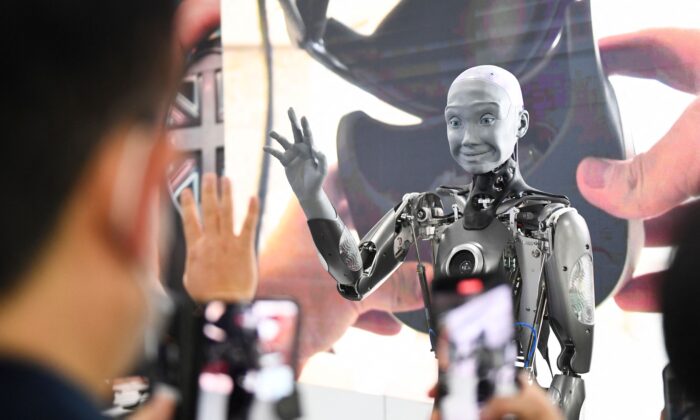 Attendees take pictures and interact with the Engineered Arts Ameca humanoid robot with artificial intelligence as it is demonstrated during the Consumer Electronics Show (CES) in Las Vegas, Nev., on Jan. 5, 2022. (Patrick T. Fallon/AFP via Getty Images)
Business & Economy

Do Robots Create or Kill Jobs?

Despite a decades-long drumbeat among some fields of thought that robotics will steal jobs from workers, a 2021 study from Management Science points to the opposite—to a certain extent.

Investments in robotics predicts improved performance at companies, according to the researchers. This can lead to an increase in demand for the firm’s products and services, which results in the company needing more workers to meet higher levels of production. The study found that the implementation of automation led to an increase in employment for low-skilled and high-skilled workers, along with a decrease in employment for middle-skilled workers.

The reduction in demand for mid-level positions could be related to a shift away from managerial needs. While managers may still be required in a company that implements automated tasks, these individuals often can supervise more lower positions, especially if some or most of these lower positions are now filled with machines. In cases such as this, there are fewer managers needed overall, and incumbent managers may be shifted to other roles when robotics enter places like factories.

In today’s stretched labor market, it can be a struggle to find workers willing to carry out difficult tasks and hard labor. Moreover, workers in these positions are often glad to step into a new role.

“Once employees see that the robots are doing the heavy lifting, and they no longer have to do such strenuous labor, they are usually very open to the change,” DeSmet said. “They might even show interest in helping to program the robots for the tasks they’ll perform.”

The shift to automation started well before the pandemic, noted DeSmet, whose company has increased its workforce five-fold during the last two years to meet the demand for automated solutions. Companies of all sizes are making the switch, added DeSmet, from small and mid-sized firms to large corporations. CRG Automation, which is based in Louisville, Kentucky, pays its workers nearly twice the average wage of the area.

The move to automated tasks is well underway in every business sector, according to Steve Reinharz, founder and CEO of Robotic Assistance Devices.

Some of the tasks best suited for robots involve labor that is repetitive and takes place in a controlled environment. Rather than tiring after an eight-hour shift in a factory, for instance, a robot can continue 24/7, provided the conditions are adequate. Manual tasks that can cause wear and tear on humans, such as constantly bending over to move parts from one machine to another, are also popular candidates for automation.

In some cases, automated services can take the place of jobs that workers don’t want. Security cameras, when coupled with AI and technology to respond to potential intruders, may be set up in residential buildings and offices that previously employed night guards.

“Change is here,” Reinharz said. To survive, “we must embrace it.”

The rollout of automation isn’t a straightforward path, noted Sara Johansson of Onsiter, a marketplace for IT contractors and businesses.

“Simply adding automation isn’t going to cut it,” she told The Epoch Times. In addition to employee adoption, robots in places where consumers shop such as retail stores and supermarkets may not be seen as welcome right away.

“Consumers will need time to adjust to the idea of vehicles moving about in stores for front-of-store applications of robots, such as replenishing shelves,” Johansson said.

Frustration may also arise if machines in stores break down, are unable to help customers locate items, or communicate in an unclear way.

Technology and automated tasks that unveil private information such as identity and financial accounts could require extra care to maintain protections.

“In the short term, the impact of automation may be moderate for workers of all education levels, but our calculations reveal that individuals with lower education levels may be significantly more vulnerable to being displaced by machines in the long run,” Tyson Stevens, founder of EduRef, told The Epoch Times. “Governments and businesses must collaborate to assist people in adjusting to these new technologies through retraining and career shifts.”

A culture shift toward adaptation and lifelong learning may coincide with automation trends in the coming years.

“Improved STEM abilities will be critical in helping people to pursue high-tech jobs created by AI and robotics,” Stevens said. “Soft skills will also be critical in making people adaptive and employable throughout their working careers.”