‘Do Not Cover up Outbreaks:’ Experts Call for Transparency After China’s Pneumonia Outbreak

Public health experts outside of mainland China are calling on Chinese authorities for transparency, after a mysterious outbreak of viral pneumonia was reported to have already infected 59 people since December in the Chinese city of Wuhan. On Jan. 5, 7 of the 59 cases were said to be “severe.”

The experts say that efforts to cover up outbreaks can have serious consequences for disease control for China’s neighboring regions.

Hospitals in Hong Kong have now reported five patients who have been to Wuhan showing symptoms of pneumonia or a respiratory infection including fever, according to Hong Kong’s Hospital Authority.

The outbreak had prompted Singapore, Hong Kong, and Taiwan earlier in the week to step up the screening of travelers and hospital patients showing pneumonia symptoms.

The Chinese authorities didn’t disclose the outbreak of what it called “viral pneumonia” until online rumors over the past month linked the outbreak to Severe Acute Respiratory Syndrome (SARS), which in 2003 infected more than 8,000 people and killed 775.

Chinese officials said on Jan. 3 that the cause of the pneumonia is not clear and did not rule out SARS, according to a statement by Wuhan Municipal Health Commission. In an update late Jan. 5, the health commission announced that it had now ruled out SARS, MERS, and bird flu as the cause of the outbreak but is still working on identifying the responsible virus.

The officials also didn’t provide the date of the first case they found linked to the Wuhan outbreak until Jan 5. The first case happened on Dec. 12.

Suspected cases have appeared in Hong Kong and Singapore. Chinese officials have said there hasn’t been obvious evidence for human-to-human transmission.

Wuhan Central Hospital, where some of the cases are being treated, declined to comment when contacted by Chinese or foreign media.

“My problem with the current outbreak and Chinese response is that very little information of any kind has been provided by authorities in Wuhan or Beijing,” Laurie Garrett, a world health policy analyst and Pulitzer Prize-winning science journalist, told NTD in an email on Jan 3.

The Chinese police summoned eight people on Jan. 1 for “spreading rumors” online about the pneumonia outbreak.

“China appears more interested in maintaining control than in abiding by the principles of the IHR,” Garrett said.

The World Health Assembly in 2005 passed the legally-binding International Health Regulations (IHR), which requires swift notification to WHO regarding any significant outbreaks. China is a signatory to the IHR.

“It’s imperative to publicize the information about the outbreak immediately,” Kuo Hsu-Tah, a Taiwanese pulmonologist who worked as a director of The Center for SARS Response at Taipei’s Mackay Memorial Hospital during the 2003 SARS outbreak, told the Chinese language Epoch Times.

“The more the government tries to cover up, the worse it is for disease control.”

Expert: the Officials May Know More

Sean Lin, a microbiologist who worked at viral diseases branch in the U.S. Army, said that the Chinese authorities may already know the source virus, or at least some potential candidates.

According to Lin, China’s Center for Disease Control, which is modeled after the CDC in the United States, is respected in China for their strong infectious disease surveillance program. He believed that if the patients’ samples have been tested in the labs there, the information available now couldn’t be as limited as the official statements have suggested.

Lin said the delay in information is either because there are multiple mutations of the virus that need time to identify or “I think the authorities have more information in the hands,” Lin said. “But the public was not allowed to be aware about this situation in more detail,” he added.

He said the Chinese regime should at least allow the media to follow up with local hospitals and patients, interview scientists, and inform the public with preventative measures.

But “in China, the problem is that the government has very pathetic reputation on the public health arena,” he said.

Parallels in delays of official information between this outbreak and the 2003 SARS outbreak had created panic in China and neighboring regions. In 2002-2003, the Chinese regime covered up the SARS epidemic for weeks before a growing death toll and rumors forced authorities to reveal the truth.

The regime didn’t alert the WHO or neighboring jurisdictions, consequently allowing a patient to flee to Hong Kong. The virus spread, resulting in 774 deaths in 37 countries.

Garrett was in Hong Kong and China during the 2003 epidemic, and subsequently visited hospitals and memorials in Vietnam, Singapore, and Hong Kong where health care workers fought and died from the disease.

“The lesson was clear to the entire world: do not cover up outbreaks,” she said. 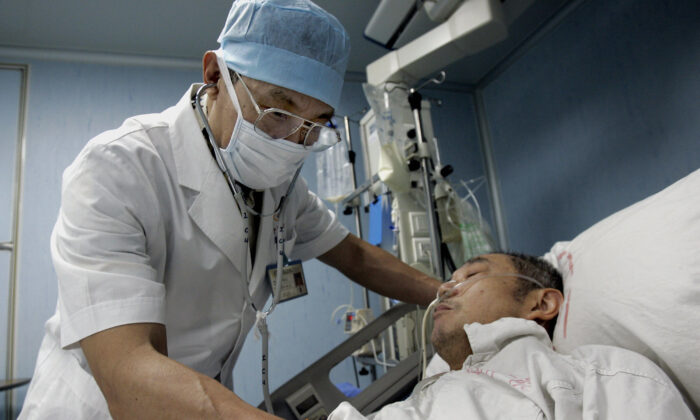