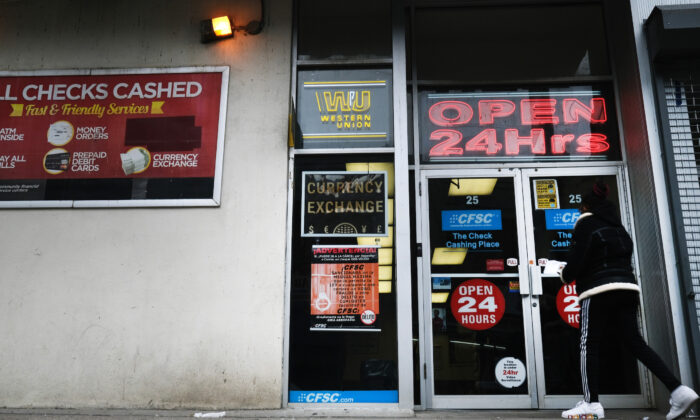 Isn’t it amazing how liberal policies often have the exact opposite effect of what they were intended to do? The left’s soft-on-crime policies aren’t helping minority communities, but increasing thefts and shootings and making these neighborhoods terror zones.

Another example is the left’s attempts to put more regulations on low-income lenders under the guise of ending “predatory lending practices” and high interest-rate charges. Often, the lasting effect of these policies is to price minorities and veterans out of the market for credit cards, short-term bridge loans, and even mortgages.

In June 2021, President Joe Biden signed S.J. Res. 15 in opposition to the Trump administration’s True Lender Rule. This Trump-era policy, which had been attacked by the left since its implementation, ensured access to short-term loans for countless Americans. But predictably, Democrats scrapped it upon taking power.

Our military members and veterans have been left out in the cold by the Democrats’ disastrous lending restrictions. In 2006, the Military Lending Act (MLA) was approved by Congress. This federal policy capped interest rates on loans for active-duty members of the military at 36 percent. Sounds good, right?

Wrong. In reality, it did exactly the opposite of what Democrats thought. While proponents of the MLA claimed that it would help military members stay out of debt, it didn’t. A HarrisX poll found that twice as many service members are worried about paying their debts compared to before the MLA’s approval. And 50 percent of respondents were denied access to loans or loan products because of MLA regulations.

Similarly, payday loans, which provide short-term bridge loans of between $200 to $1,000 for families that might be facing a financial squeeze between paychecks or during rough patches, have been limited or even closed down in many states. Liberals complained that the interest rates charged were too high. But for many thousands of low-income borrowers, these two- or three-week loans were lifesavers. If they’re so evil, why are the loan stores so popular?

Rather than learning from these mistakes, Democrats have doubled down on these failed policies. Sen. Jack Reed (D-R.I.) recently introduced the Veterans and Consumers Fair Credit Act of 2021 (S. 2508), which would take the lending standards of the MLA and apply them to every American.

Reed claims that the legislation would help veterans and consumers more broadly, but we all know the truth. If Democrats ram through this proposal, it will take away access to credit for millions of people, including veterans that Reed laughably claims would benefit from his legislation.

Because of leftist politicians, Americans who need access to credit are being denied. When Democrats denounce third-party lenders charging high-interest rates on short-term loans as “greedy” and move to regulate them, they’re ignoring reality. The left’s lending restrictions don’t make it easier for borrowers to repay their loans by lowering interest rates. Instead, many potential borrowers are left without any access to credit.

Veterans aren’t the only group hurt by policies such as S.J. Res. 15. Minorities and low-income Americans—the same groups the left claims to be fighting for while championing these destructive policies—also disproportionately suffer the consequences. Given lower average incomes, members of these groups are less likely to be offered loans by banks when interest rates are capped.

By attacking third-party loan providers, the left’s lending regulations give banks a monopoly over deciding who has access to credit. This leads to banks denying risky borrowers, who had previously got loans from third-party lenders, access to credit because of mandatorily low interest rates. When people who relied on loans to make ends meet are prevented from getting the credit they need, they’re often ruined financially.

If anyone knows how destructive interest rate caps on loans are, it’s our active-duty service members and veterans who have been hurt by the MLA. Lending restrictions such as S. 2508 would only prevent millions of people who need access to credit from getting it.