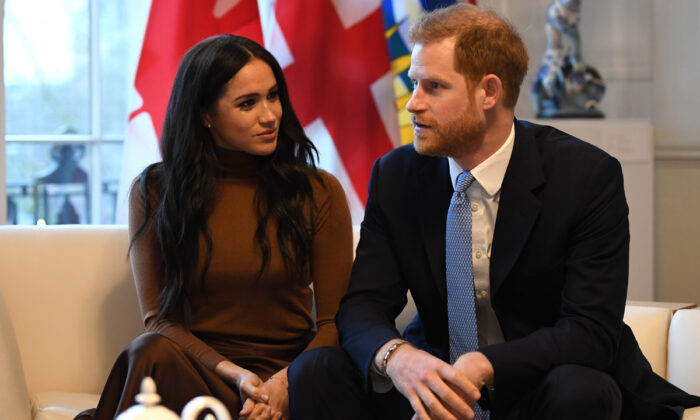 Prince Harry and his wife Meghan during their visit to Canada House in London, England, in thanks for the warm Canadian hospitality and support they received during their recent stay in Canada on Jan. 7, 2020. (Daniel Leal-Olivas/Getty Images)
Viewpoints

Do Canadians Want to Defer to Harry and Meghan?

One thing Canadians tend to be is sensible. And so it is surprising how many would consider making Prince Harry and his wife, the former Meghan Markle, king and queen of Canada. Harry is a beneficiary of the lucky sperm club, and Meghan was TV actress from Los Angeles. Do Canadians really want to defer to these two, even under their current titles, His Royal Highness The Duke of Sussex and Her Royal Highness The Duchess of Sussex?

A writer for Toronto’s The Globe and Mail called their possible part-time residence in Canada “the fairy-tale ending we all deserve.” Ottawa needs to issue a nationwide dignity alert.

Polite applause is due to the nearly 4,000 residents of East Sussex, England, who petitioned their council to avoid referring to Harry and Meghan as the Duke and Duchess of Sussex. They called such titles “non-democratic” and urged their council to not afford the couple “any hospitality or courtesies above and beyond that of an ordinary member of the public.”

This was before Harry and Meghan set off a convulsion by announcing that they would offload their tedious royal duties and live half the time in North America.

Harry and Meghan are free humans. And they would not be the first couple to divorce themselves from family. But, boy, are they tawdry—if you buy into the royal mystique.

“We intend to … become financially independent, while … continuing to honour our duty to the Queen, the Commonwealth, and our patronages,” they said in a statement. Sounds nice, but they want to monetize membership in the royal family while avoiding the work. Harry and Meghan’s new website, Sussexroyal.com, looks like it sells fancy bath towels. And maybe it will. They’ve applied to trademark their Sussex Royal brand—books, clothing, charities and such.

Harry complains that British newspapers have mistreated Meghan. True, some coverage of the biracial Meghan has been ugly, but for the most part, it’s been the usual onslaught of tabloid abuse.

Both have launched suits against the tabloids. But as Harvard law professor Noah Feldman opined: “Freedom of expression demands that stories about royals be given substantial license. That’s a price that they should have to pay for their substantial privileges.”

The public was billed perhaps $41 million for security costs at Harry and Meghan’s wedding. The queen gave them Frogmore Cottage, nicely situated on the Windsor estate. The house needed structural repairs for which British taxpayers spent about $3 million.

The estimated $6.5 million in annual expenses given to Harry and Meghan, and Prince William and his family, are largely paid for by Prince Charles. His money comes from the Duchy of Cornwall—a vast private estate that includes farmlands and coastal areas, residential and commercial properties.

The royals’ deal has been that, in return for deference, six palaces, castles and estates, and enormous public subsidies, they perform mainly ceremonial duties, keep their complaints to themselves and behave as models of rectitude.

Rectitude was in decline even before Prince Andrew’s romp with sexual predator Jeffrey Epstein. Harry’s mother, the late Princess Diana, turned the world into her fashion runway—all the while griping about the media attention. Divorced from Charles, she died in a car crash in Paris alongside her playboy lover, Dodi Fayed.

Now you have Harry and Meghan working their brand—for example, publishing pictures of their newborn, Archie, peek-a-boo style on their Instagram account. They declined doing a traditional official royal baby picture.

And who will foot the bill for their enormous security expenses? Britain? Canada? Perchance they themselves?