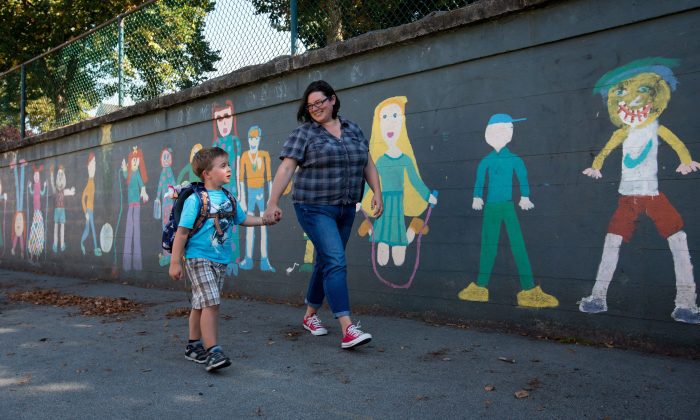 A mother shows her son around the grounds of a school in Vancouver in preparation for his first day in kindergarten, Aug. 20, 2013. A burgeoning teacher-led movement that rejects unproven education education trends is quickly growing, and some educators say a change in how education is delivered in Canada is long overdue. (THE CANADIAN PRESS/Darryl Dyck)
Canada

A grassroots teacher-led movement that has taken hold in the United Kingdom is spreading around the world and last weekend landed in North America. Its message for schools: Stop using students as guinea pigs for unproven teaching methods.

Dubbed ResearchED, the movement was founded in 2013 to counter fads and “pseudo-science” that some say have come to dominate education in recent decades. The movement calls for education practices based on solid research.

Supporters of the movement say education policy is dominated by biased groups with vested interests. The results are kids being coddled, left without the skills they need to face the world, and ill-prepared for the hard realities ahead.

But supporters of the status quo say the current approaches prepare students for a job market that demands creativity and problem-solving. They say Canada takes a balanced approached to education research. Critics, they suggest, may have some good points, but they overplay their hand.

Those critical of current approaches believe a major change is needed. Halifax-based education expert Paul Bennett says Canada needs a “quiet revolution” like ResearchED to shake up the increasingly insular world of education policy. He was among those at the first North American ResearchED conference this past weekend in New York.

“So much of what passes for educational research is people riding hobby horses and making arguments and presenting selective evidence that we’ve heard before,” Bennett says.

ResearchED offers a grassroots effort to focus on what actually works in education, he says.

“I would say that educational research is in bad odour almost everywhere because it’s of uneven quality and often it’s politically motivated,” he adds.

Bennett is critical of the “progressive” education methods being adopted in schools. These methods often see teachers viewing themselves as facilitators of learning rather than instructors. Instead of teaching, they guide students to discover things for themselves, including mathematic formulas like the Pythagorean theorem.

While many educators say that a balance of both progressive and traditional approaches can be beneficial, some new methods have had questionable results, sparking controversy and significant push-back from parents.

In Canada, the “discovery learning” or “discovery math” approach famously linked to falling math scores; “no-zero” grading schemes and the abandonment of academic awards; and the increase of mysterious and confusing jargon or “edu-babble” on report cards are signs of a system growing disconnected from rigorous and independent research, says Bennett.

The most common problem he’s observed with the research is that its small scale—sometimes using sample sizes of just 100 students or 150 teachers—doesn’t necessarily have broad applicability and “serves very narrow research priorities.”

Those priorities are often set by unions or education researchers with firmly set ideas about what works in education. Bennett says education think-tanks like the Canadian Education Association (CEA) won’t even look at other approaches.

“You won’t get published in Education Canada period unless you’re advocating discovery math, because there’s a very strong research bias,” he says.

Ron Canuel, CEO of the Canadian Education Association, disagrees with that kind of summary of the work his group does. He says a movement like ResearchED is long overdue, but he doesn’t agree that Canadian institutions like his have a research bias.

“We tend to be open to all types of context and research and input,” he says.

A 40-year veteran of the teaching profession, Canuel says resistance against change is part of the problem. So too are divisive reactions.

“What we see, sadly enough, is when people are trying to make change, that’s when others use research to oppose the change.

“People feel that to advocate their position they have to somehow diss the other side.”

A better approach, he adds, is to bring people together in collaboration.

Canuel also has a different perspective on the controversy surrounding discovery learning, which advocates multiple complex and open-ended methods of solving problems instead of mastering the key principles through traditional formulas and memorization.

This technique has been linked to a decrease in math scores of 15-year-olds in Canada, which dropped 14 points in the last decade, but Canuel says that has much to do with professional development. Quebec takes a progressive approach to math and has seen test scores remain high.

“They actually started to train the teachers, the elementary level in particular, with more math skills. And they found that the results ended up increasing and bettering the math scores.”

But resistance to the new approach and complaints about it from both parents and students are widespread. Some students have struggled to understand new curriculum, while parents have trouble helping kids with their math homework. Many have sought outside tutors. Some university professors complained that kids were coming to them with shaky math skills, and campaigned for a return to traditional methods.

The complexity of teaching and the relentless demands upon teachers makes them vulnerable to charismatic hucksters.
— Professor emeritus Charles Ungerleider

Thousands have signed petitions in many provinces to stop the new math from being taught. Under pressure, some provinces such as Manitoba brought back some of the old ways of doing math.

But research continues to be produced in Canada touting the benefits of new math and supporters say it prepares students for a new world where problem-solving is as important as memorization.

Reforms Need to be Monitored

ResearchED proponents don’t negate the possibility of new approaches, but challenge research narrowly focused on supporting current approaches. They point to the findings of the Organisation for Economic Co-operation and Development (OECD) as signs of a problem. The OECD found over $2.5 trillion is spent on education policies around the world each year, but just one in ten of those policies are actually evaluated for their impact.

The OECD report also warned that while there is scant checking on what new policies in schools achieve, there is much political investment in announcing them.

Governments need evidence-based education policy and should monitor reforms to make sure they are working, says Charles Pascal, a University of Toronto professor of Applied Psychology & Human Development who was adviser on early learning to former Ontario Premier Dalton McGuinty.

“While there are many excellent examples across Canada of academic researchers who actively engage teachers as genuine partners, there needs to be more.”

Canada’s education policy is largely influenced by research from the U.S. and other countries. Of the research that is produced here, Bennett says the bulk of it is led by a small “inward-looking” group of education organizations—such as the Ontario Institute for Studies in Education and the CEA—and academics or teachers’ unions, making it easier for “research bias” to creep in and linger.

“It’s very easy to get public funding for research that supports the existing order,” he says.

Education can be vulnerable to trends and fads because it’s a difficult and complex field wrought with pressing challenges, says Charles Ungerleider, professor emeritus of educational studies at the University of British Columbia.

Teachers don’t have the training or time to evaluate education research and are eager for promising new approaches, he says.

“The complexity of teaching and the relentless demands upon teachers makes them vulnerable to charismatic hucksters.”

Many educational entrepreneurs are former education researchers who have lost the skepticism that should accompany research, Ungerleider notes.

But he discounts dire views on the state of education, noting that education in Canada follows a body of time-tested evidence and standards that guide teachers and administrators.

ResearchED started by accident with a tweet by founder Tom Bennett (no relation to Paul Bennett), a U.K. schoolteacher and author.

Discouraged by the revolving door of ineffective fads he was mandated to teach, he tweeted an idea for a conference on improving educational research.

“I woke up the next morning, there were two or three hundred emails from people offering to speak, help contribute financially, host. It was madness,” he recalls. “I just thought to myself, ‘My god, something’s happening here.'”

ResearchED is grassroots-driven, propelled by teachers and others outside the existing bureaucracy. It supports progressive methods that are proven effective, but is skeptical of those developed by academics, social scientists, or researchers and not in collaboration with teachers or that haven’t been tested in real-life classroom scenarios.

The movement has gained significant influence in the U.K. and has started selling out conferences in other countries. Last weekend hundreds gathered in New York for a ResearchED conference and Bennett has outstanding invites for conferences in Canada and elsewhere.

“I feel like I’ve tapped into something, like there was volcano just underneath the ground,” he says.

“Teachers want to re-empower themselves and re-professionalize themselves again from the ground up, and [are finding] the courage and the boldness to stop waiting for somebody to come along and fix the education system.”