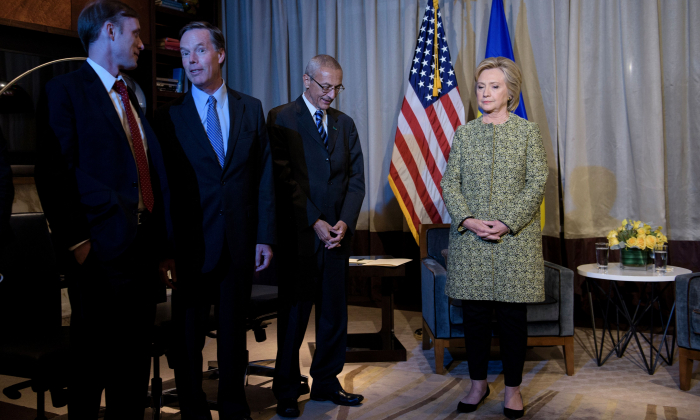 Alexandra Chalupa, an operative paid by the Democratic National Committee (DNC), asked the Ukrainian Embassy in Washington for dirt on Trump campaign Chairman Paul Manafort in 2016, the embassy confirmed in a statement to The Hill.

While the embassy denies having helped the operative, a former embassy worker told The Hill’s John Solomon that it did help Chalupa, knowing full well that she was working to help elect then-candidate Hillary Clinton and defeat then-candidate Donald Trump.

Ambassador Valeriy Chaly, in written answers to Solomon, said that Chalupa asked the Ukrainian government for information on Manafort’s dealings inside Ukraine. Chalupa tried to arrange for Ukrainian President Petro Poroshenko to comment about Manafort’s ties to Russia during a 2016 visit to Washington, Chaly said.

“The Embassy got to know Ms. Chalupa because of her engagement with Ukrainian and other diasporas in Washington D.C., and not in her DNC capacity. We’ve learned about her DNC involvement later,” Chaly said in a statement to The Hill.

“We were surprised to see Alexandra’s interest in Mr. Paul Manafort’s case. It was her own cause. The Embassy representatives unambiguously refused to get involved in any way, as we were convinced that this is a strictly U.S. domestic matter.

“All ideas floated by Alexandra were related to approaching a Member of Congress with a purpose to initiate hearings on Paul Manafort or letting an investigative journalist ask President Poroshenko a question about Mr. Manafort during his public talk in Washington.”

Late last year, a Ukrainian court ruled that two Ukrainian officials broke the law and interfered in the U.S. election by releasing confidential information on Manafort’s financial dealings. One of the two officials, Serhiy Leshchenko, is known to have provided information to Fusion GPS, the opposition research firm behind the infamous Clinton-funded Steele dossier. The FBI used the dossier as evidence to secure a warrant to spy on another Trump-campaign associate, Carter Page.

The case that led to the release of Manafort’s records was restarted after Obama administration officials met with Ukrainian officials at the White House in January 2016, according to the former Ukrainian embassy official, Andrii Telizhenko. While Telizhenko doesn’t recall whether Manafort’s name was mentioned during the White House meeting, he specifically remembers Obama administration officials urging Ukrainian officials to restart an investigation into payments to U.S. citizens from Ukraine’s Russia-backed Party of Regions. That case previously led the FBI to Manafort, but the bureau dropped the investigation in 2014 without charging him.

The Ukrainian Embassy asked Telizhenko to deal with Chalupa. Contrary to the embassy’s claims, Telizhenko said that both the ambassador and a top deputy instructed him to help Chalupa and described her as someone “working for the DNC and trying to get Clinton elected,” Telizhenko told The Hill.

According to Telizhenko, Chalupa was specific about the kind of information she was looking for.

“She said the DNC wanted to collect evidence that Trump, his organization and Manafort were Russian assets, working to hurt the U.S. and working with Putin against the U.S. interests. She indicated if we could find the evidence, they would introduce it in Congress in September and try to build a case that Trump should be removed from the ballot, from the election,” Telizhenko told The Hill.

Telizhenko was concerned that helping Chalupa might have been illegal but proceeded to carry out the assignment anyway. He used his contacts in Ukrainian intelligence, police, and prosecutorial offices to gather information linking Trump to Russia.

He said he felt it would be wrong to hand what he found directly to Chalupa, so he gave it to Chaly instead.

“I told him what we were doing was illegal, that it was unethical doing this as diplomats,” Telizhenko said.

Chaly took the information from Telizhenko, saying he would handle the matter. Subsequently, their relationship soured, and Telizhenko was told to return to Ukraine in June 2016. Upon arrival, Telizhenko reported what he knew to Ukraine’s top prosecutor.

“Everybody already knew what was going on and told me it had been approved at the highest levels,” Telizhenko said.

Telizhenko doesn’t know whether his research was ever handed to Chalupa. The DNC claims that Chalupa’s work targeting Trump and Manafort was a personal pursuit.

The DNC paid Chalupa $71,918 during the 2016 election cycle. Contrary to the DNC’s claim, Chalupa emailed the committee that she was “digging into Manafort.”

“A lot more coming down the pipe,” Chalupa wrote to a senior DNC official on May 3, 2016, speaking about a speech Manafort made to 68 Ukrainian investigative journalists.

“More offline tomorrow since there is a big Trump component you and Lauren need to be aware of that will hit in next few weeks and something I’m working on you should be aware of,” she added.

Less than a month after that email, Ukrainian officials released Manafort’s financial records, forcing him to resign from the Trump campaign. The same records formed the core of the case against Manafort that led to his conviction.

Solomon notes that while the accounts of Chaly and Telizhenko differ, the embassy nevertheless confirmed that a DNC operative sought Ukraine’s help to find dirt on Manafort to affect the 2016 election in favor of Clinton.

The revelation that a Democratic operative sought help from a foreign government surfaced less than a month after special counsel Robert Mueller completed an investigation into Russian interference in the 2016 election, concluding that there was not enough evidence to establish that Trump or anyone in his campaign colluded with Russia. For example, there was no evidence that anyone on the Trump campaign approached the Russian Embassy seeking help to find dirt on Clinton.

In addition to Chalupa’s efforts, the Clinton campaign and the DNC funded an opposition research project that resulted in the infamous Steele dossier. The document’s author, former British intelligence officer Christopher Steele, used second- and third-hand sources with ties to the Kremlin to compile the document. Of the claims within the dossier that are damaging to Trump and his associates, none were substantiated by Mueller’s final report.