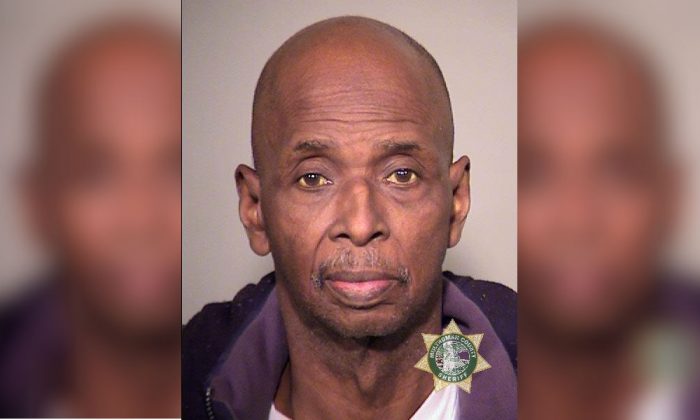 An Oregon man was arrested on Tuesday, Feb. 27, and brought before a Multnomah County judge for the rape of a woman over 20 years ago.

He pleaded not guilty in court on Wedensday.

The woman, who is now 46, lives out of state, The Oregonian reports.

According to the paper, Moore has been convicted of 10 felonies and four misdemeanors in three states, including Oregon, Washington, and Wyoming.

The daughter of the Portland resident, Nakia Moore, told FOX 12 over the phone that it made her sick to her stomach to learn of her father’s arrest.

“It’s not in his character to do something like that,” she said. “But, if he did, I’m a mother myself and I would want justice done, whether it was years later or not.”

She told the station that her father has lived in Portland for the last six years, and before that in Wyoming.

The reason the case sat for so long is that the Portland Police Bureau had a backlog of rape kits going back 1984 that were only recently DNA tested, according to a video released by the bureau.

While Multnomah County, which encompasses Portland, hasn’t said how many rape kits it had in its store rooms, when combined with Marion and Lane Counties, the number reached almost 2,800.

The three counties got various grants to deal with the backlog, which Fayetteville Police Department Lieutenant John Somerindyke said was due to long processing times at the state crime lab.

With over $3 million in grants, the three counties were able to send their rape kits to a private lab in Salt Lake City, Utah, starting in April 2016. Somerindyke said the private lab has had a much faster turnaround time.

Moore is being held in the Multnomah County Detention Center and is due back in court on March 8, The Oregonian reports.

For survivors with inquiries about their untested sexual assault kits from Multnomah, Marion, or Lane Counties, they can email safekitinfo@mcda.us or call 503-988-3017.