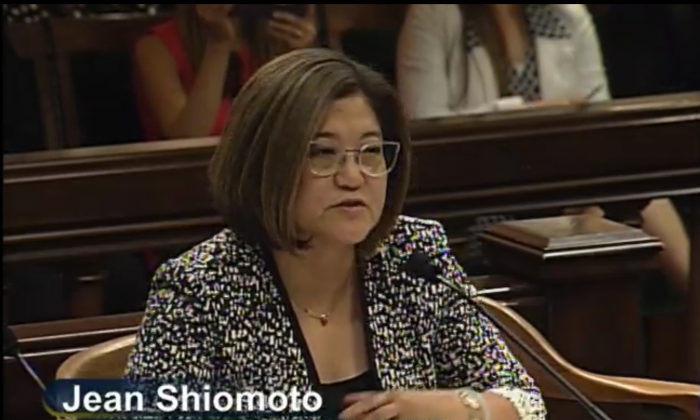 After being criticized for long wait times and registering noncitizens for voting in the 2018 election, the California Department of Motor Vehicles confirmed on Dec. 17 that its current director will retire by the end of the year.

Jean Shiomoto, who has been leading DMV over the past five years, announced last month to her staff that she will not continue her role as the director of DMV, wrapping up her 38-years of state service, the DMV told the Epoch Times in a statement.

This comes after a controversial year of long wait-times, technology outages, and voter registration issues at DMVs across the state. pic.twitter.com/XweRPErKTK

Shiomoto was appointed by Gov. Jerry Brown as the director of the DMV in Nov. 2013, ten months after she assumed the role of acting director in the department. However, it wasn’t until 2018 that her leadership was called into question.

Starting last summer, wait times in DMV field offices had increased dramatically across the state. In August, the average wait time increased to 69 minutes, not including the potential two- to three-hour wait outside the DMV office for customers who did not make an appointment.

Thomas Welch tells me he got to the SF DMV office at 9 am to renew his license…it’s now 4:30pm and there’s only six more people in front of him. How the DMV is promising to fix long wait times is the story we’re working on @nbcbayarea pic.twitter.com/5JFkqcNx5Z

The DMV explained the excessive wait times experienced over past few months were due to demand for Real ID applications, which will be required for all passengers to board airplanes by Oct. 1, 2020 for those travelling domestically without a passport.

To reduce long wait times, the DMV convinced the state legislature to allocate nearly $17 million to the department in additional funding to hire another 230 staff. However, some Republican lawmakers doubted the effectiveness of this strategy.

In September, Assemblymember Jim Patterson, who advocated for an audit of the DMV, pointed out that the department had 35 outages in the last 18 months and the longest one was nine hours long. He described “there is a pattern,” adding that the “DMV can’t be trusted to police itself.”

In addition, the DMV was found to have mishandled the information for 23,000 voter registrations, including giving people the wrong political party preference and sending non-qualified people’s information to California’s secretary of state, who maintains the list of registered voters.

California Secretary of State Alex Padilla in October called for an independent audit of the DMV after the agency admitted that around 1,500 people, including non-citizen individuals, were wrongly registered to vote through the Motor Voter program during the period from April 23 to Sept. 25.

“These mistakes from DMV are absolutely unacceptable. We were told last month that the instance of the 23,000 … that they had a fix and while this problem seems to be different. It’s another mistake nonetheless … it risks jeopardizing confidence in the electoral process,” said Alex Padilla at the press conference.

However, the issue got more serious after Shiomoto recently revealed that the DMV failed to transmit 589 voter records to elections officials before the November election, which could have prevented those people from voting.

In a <a href=”https://admin.cdn.sos.ca.gov/press-releases/2018/sos-letter-to-gov-brown-and-gov-elect-newsom.pdf”>letter</a> to Brown and Newsom on Dec. 14, Padilla asked them to “promptly appoint new leadership at the DMV.”

“This is now the fourth egregious error DMV has committed since the launch of Motor Voter earlier this year,” he said in the letter. “This latest error could have potentially disenfranchised eligible California citizens.”

Patterson in a statement on Shiomoto’s retirement, “This is not surprising, given the catalogue of mistakes with the DMV’s Motor Voter program and the public uproar caused by outrageous wait times this year.”

Previously, Shiomoto had been asked to resign by Republican gubernatorial candidate John Cox.