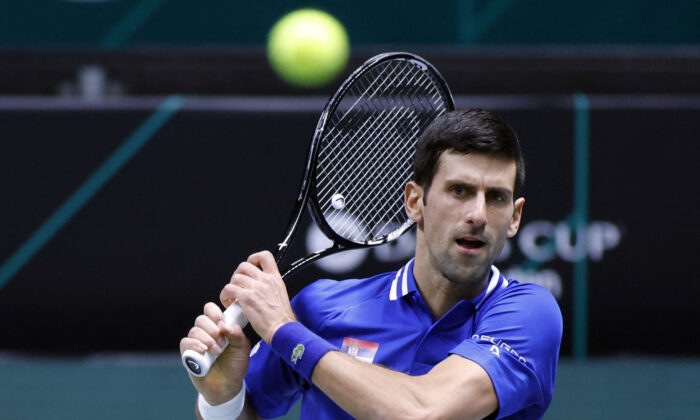 Djokovic’s Family Says Star a Victim of Politics, Kept as ‘Prisoner’ in Australia

The family of Novak Djokovic and the president of his home country say Australia’s crackdown on the tennis star is part of a political agenda.

“This has nothing to do with sports, this is a political agenda. Novak is the best player and the best athlete in the world, but several hundred million people from the West can’t stomach that,” Djokovic’s father, Srdjan, told reporters in Belgrade on Thursday.

“What’s not fair is this political persecution, that everyone is taking part in, even the Australian prime minister,” he said, adding that he was “afraid that this kind of political ranting against Novak Djokovic will continue.”

“They want to prove something else. When you can’t beat someone then you do these kind of things,” he said.

Djokovic, who has declined to say whether he’s received a COVID-19 vaccine, announced this week he had obtained a medical exemption from vaccination requirements for the Australian Open, which is being held in Melbourne starting later this month.

Medical exemptions can be granted for several reasons, including to people who had a severe allergic reaction when getting a dose of a vaccine.

Djokovic’s visa was canceled and Australian authorities want to deport him. A court agreed not to deport him before a full hearing scheduled for Monday, leaving the Serbian champion holed up in a quarantine hotel in Melbourne for at least the next 72 hours.

Dijana Djokovic, Djokovic’s mother, told reporters in Belgrade that the accommodation was terrible, describing the hotel as riddled with bugs, dirty, and with poor food.

“There are no special cases, rules are rules,” Australian Prime Minister Scott Morrison said at a televised news briefing. “We will continue to make the right decisions when it comes to securing Australian borders in relation to this pandemic.”

Australia has imposed some of the strictest rules in the world during the COVID-19 pandemic, sticking with them even as the effectiveness of vaccines has plummeted amid the current wave fueled by the Omicron variant of the CCP (Chinese Communist Party) virus. The CCP virus causes COVID-19, a disease.

Dijana Djokovic said that she spoke with her son and that he was having trouble sleeping.

“As a mother, what can I say, if you are a mother you can just imagine how can I feel. I feel terrible since yesterday, last 24 hours, that they are keeping him as a prisoner. It’s just not fair, it’s not human. So I just hope that he will be strong, as we are trying also to be very strong to give him some energy to keep on going. I hope that he will win,” she said.

A previous version of this report incorrectly named the city hosting the Australian Open. The Epoch Times regrets the error.