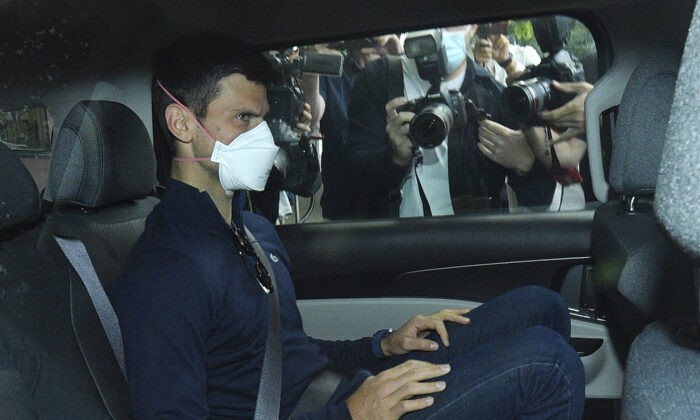 Serbian tennis player Novak Djokovic rides in car as he leaves a government detention facility before attending a court hearing at his lawyers office in Melbourne, Australia, on Jan. 16, 2022. (James Ross/AAP via AP)
Australia

On Jan. 16, the world number one male tennis player left Australia after his visa was cancelled by Immigration Minister Alex Hawke—exercising sweeping discretionary powers that the Federal Court later upheld during an urgent court hearing.

Hawke’s move overturned an earlier court decision on Jan. 10 that allowed Djokovic to stay in the country. As a result, the Serbian is effectively banned from re-entering Australia for three years.

Morrison told 2GB radio that the world champion could be allowed to return in the right circumstances.

“I’m not going to precondition any of that or say anything that would not enable the minister to make the various calls they have to make,” the prime minister said on Jan. 17.

“It does go over a three-year period, but there is the opportunity for (Djokovic) to return in the right circumstances and that would be considered at the time.”

Home Affairs Minister Karen Andrews was less upbeat saying the tennis star could be barred until he was vaccinated.

“Any applicant would need to go through the process, it doesn’t matter if you’re Novak Djokovic or anyone else … it’s not a straightforward process,” she said, in comments obtained by AAP.

“The saga could have been avoided if Novak Djokovic was vaccinated,” she added.

The opposition has largely supported the deportation of the tennis star, but also criticised the federal government for handling the issue poorly.

“This has been a situation that is entirely preventable because the Morrison government gave Novak Djokovic a visa on Nov. 18 and for 60 days failed to act,” Labor’s deputy leader Kristina Kenneally told reporters on Jan. 17.

“They should have cancelled his visa back on Nov. 18. They shouldn’t have given him one.”

However, Treasurer Josh Frydenberg said Djokovic obtained his visa via an automated process.

“We get lots of visas, there’s a computer-generated process. It relies on the applicant putting in what they believe are their conditions,” he told the Seven Network.

Djokovic’s eventual deportation has been criticised by legal and civil rights groups, warning that it set a “dangerous” precedent for the erosion of free speech around sensitive issues.

The tennis star’s expulsion from Australia was instigated by the immigration minister on the grounds that he was a “high-profile unvaccinated individual” and could lead other unvaccinated Australians into “refusing to get the jab, anti-vaxxers having their views reinforced and a reduction in the uptake of booster doses.”

In terms of public health though, the minister conceded that Djokovic—who is unvaccinated—posed a “negligible risk” of transmitting the virus to the community.

“Our concern is the federal government’s view that it did not have to prove that Djokovic would foster views about vaccination that are contrary to the government, but simply that he may foster those sentiments,” Greg Barns S.C., spokesperson for the Australian Lawyers Alliance said in a statement on Jan. 16.

“This is a very low bar for excluding a person from Australia, particularly in circumstances where the power to review or appeal the decision is so limited.

“Using the criteria of a possible risk to public order as a reason to refuse a person entry into the country is troubling in a society supposedly committed to freedom of speech and freedom of thought,” he added.