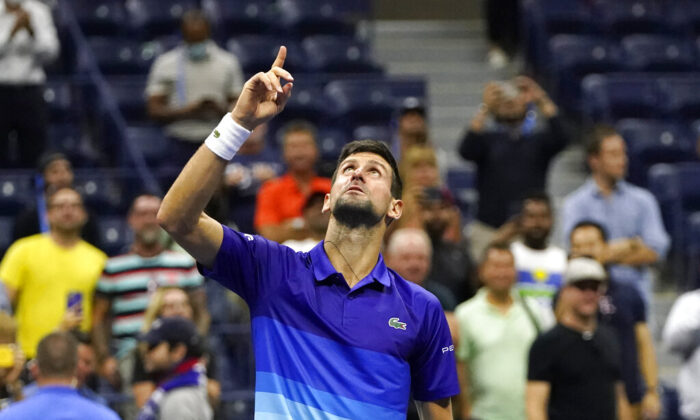 Novak Djokovic of Serbia motions and looks up after defeating Matteo Berrettini of Italy during the quarterfinals of the U.S. Open tennis tournament in New York, on Sept. 9, 2021. (Frank Franklin II/AP Photo)
Australia

After a lengthy hearing, Novak Djokovic has been released from immigration detention in Australia, with federal judge Anthony Kelly re-instating the tennis player’s visa after the hearings on Monday with fans celebrating his win outside the Federal Circuit Court.

Kelly ordered that Djokovic’s passport and all other personal effects be returned to him, with the order pronounced in open court at 5.16 p.m.

The attorney representing the federal government, Anthony Tran, said the government would comply with the orders, but Immigration Minister Alex Hawke is still considering using his discretionary power to cancel Djokovic’s visa.

Kelly said if the government exercises its power to cancel the visa, Djokovic will not be permitted to return to Australia in three years, but it could be appealed.

He demanded that if the government decided to enact the powers, the court was entitled to be informed.

At the hearing, Kelly deemed the decision to cancel Djokovic’s visa “unreasonable”  after the player had been told, at 5.20 a.m. on Jan. 6, that he could have until 8.30 a.m. to respond to officials.

The call to cancel the visa, however, happened before that deadline at 7.42 a.m., before Djokovic could use the time to “consult others” and make further submissions on his own behalf.

The government also acknowledged it had not given Djokovic enough time to make his case while he was being held after arriving in the country.

The minister for Home Affairs, Karen Andrews, has filed a submission against the appeal on Jan. 9, expressing that Djokovic can still be detained despite court orders.

“An order for immediate release does not prevent re-detention if there is power to detain,” the submission read. The tennis player is now set to be released from immigration detainment.

However, certain discrepancies that have come to the public’s attention were not addressed at the hearing.

The exemption noted that he had tested positive for COVID-19 on Dec. 16 but had not had a fever or other symptoms in the preceding 72 hours.

However, photos on social media have shown the player attending a children’s award ceremony on Dec. 17, a day after his COVID-19 positive test.

Prime Minister Scott Morrison has publicly stated that he would not comment on the matter.

“That’s purely a matter before the courts at the moment,” he said at a press conference in Canberra during the federal hearing.

However, he also referred to Greg Hunt’s letter addressed to Craig Tiley dated on Nov. 29, saying the federal government’s advice to Tennis Australia has been very clear.

“But in relation to the government, our government, the federal government’s advice to Tennis Australia, that was set out very clearly in November.”