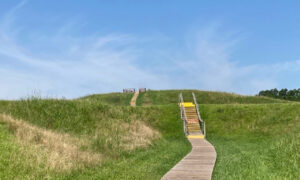 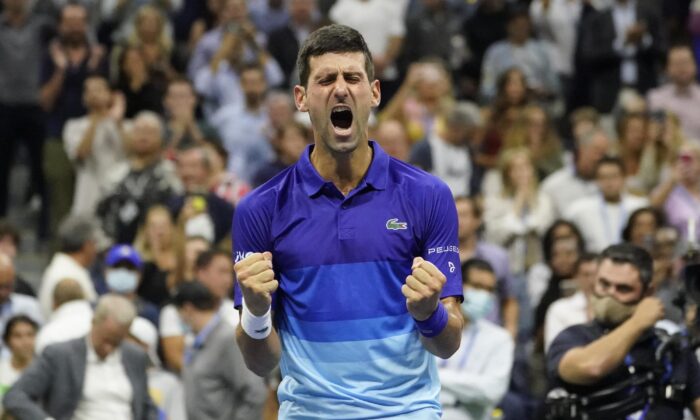 Novak Djokovic of Serbia reacts after defeating Alexander Zverev of Germany during the semifinals of the U.S. Open tennis championships in New York on Sept. 10, 2021. (Elise Amendola/AP Photo)
Tennis

Novak Djokovic is one victory away from making history in professional male tennis following a semi-finals victory on Friday. The Serbian native is now set to complete his quest and become the first calendar-year Grand Slam winner in 52 years.

Djokovic defeated fourth-seeded Alexander Zverev of Germany during a five-set battle at Flushing Meadows in New York—in which the top-ranked player set to notch a 4–6, 6–2, 6–4, 4–6, 6–2 triumph, making him 27–0 in major championships this season.

It takes 28 wins, seven for each at the Australian Open, French Open, Wimbledon, and U.S. Open, to complete a calendar-year Grand Slam.

“It’s great for the sport,” Zverev said about Djokovic’s quest. “Nobody thought that anybody would do it again. … I do believe that he will do it.”

If Djokovic claims victory over Daniil Medvedev during the U.S. Open finals on Sept. 12, he will earn a place at the table alongside the only two men to accomplish the elusive feat—deceased Don Budge and Rod Laver, who was present on courtside during Friday’s match to watch Djokovic move to the brink of history.

“I know that people would like to hear me talk about it, but there is not much to talk about,” Djokovic said of his quest to become the first male tennis player to win the title since Laver in 1969.

“There is only one match left … I’m going to put my heart and my soul and my body and my head into that one. I’m going to treat the next match like it is the last match of my career,” he added.

Medvedev swept past Canada’s Felix Auger-Aliassime, 6–4, 7–5, 6–2, during the first semifinal match on Friday, keeping his hopes alive of earning a first major title and a rematch against Djokovic.

The 25-year-old from Russia most recently suffered a lopsided defeat against Djokovic at the Australian Open final, but he told reporters Friday that he’s hungrier this time around. Medvedev has never defeated Djokovic at a Grand Slam.

“I always give my best, but I feel like I didn’t leave my heart on the court in Melbourne,” Medvedev said, referring to his defeat during the Australian Open final earlier this year.

“Even if, of course, I wanted to, there was something not turning up in this match. That’s what I’m going to try to do on Arthur Ashe with hopefully 100 percent of fans. No matter the score, I’m just going to turn up the heat, if I can say, and try to do my best, even more than what I did in Melbourne,” he added.