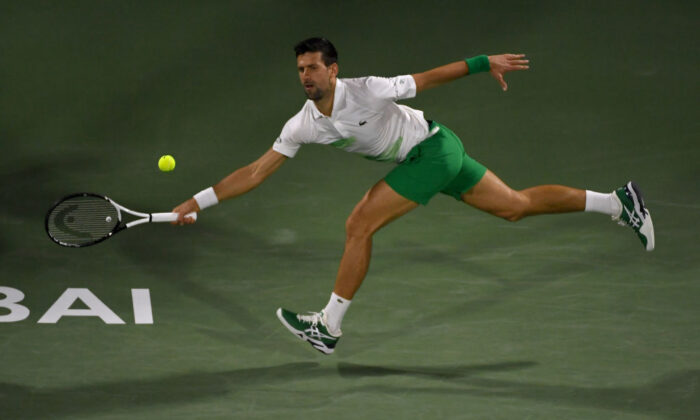 Novak Djokovic of Serbia returns the ball in the second round match against Karen Khachanov of Russia during day 10 of the Dubai Duty Free Tennis in Dubai, United Arab Emirates on February 23, 2022. (Photo by Martin Dokoupil/Getty Images)
Australia

Novak Djokovic has lost his world number one ranking after suffering a shock defeat to world number 123, Czech Jiri Vesely, in his quarter-final in Dubai on Thursday.

Playing in his first tournament since being deported from Australia, Djokovic needed to get as far as the semi-finals to retain his top ranking, but went down 6-4, 7-6 (7/4) to Vesely, who interestingly also beat the Serbian in their last meeting in 2016, Fox Sports reported.

Djokovic had sat at the top of the rankings for 361 weeks until the defeat, with Russian Daniil Medvedev now replacing him.

The Serbian had said at the start of the tournament that he “would be the first to congratulate” Medvedev, should he reach number one.

This is the first time since 2004 that the world number one has not been part of what is known as the “Big Four”—Djokovic, Rafael Nadal, Roger Federer, and Andy Murray.

In their quarter-final, Vesely broke the Serbian’s serve early, taking a lead of 2-0, and despite a comeback from the world number one, the Czech managed to break away again, taking the first set 6-4.

The second set was tight, with each player holding serve and a tie-break necessary to decide the victor. Vesely got the better of the exchange, taking the tie-break 7/4 to seal the match.

Djokovic told reporters after the match that Vesely had played better, going for his shots.

“His serve was big. His whole game was big,” he said.

“I expected myself to play on a higher level, for sure. I mean, I can do better. But credit to Jiri.”

The 123rd seed has now qualified for his first tour-level semi-final since 2020, which will be against either world number 14 Denis Shapovalov or 99th seed Ricardas Berankis.

“It’s an amazing feeling. I never thought I would really have a chance against Novak. He’s one of the greatest of all time, if not the best,” Vesely said.

Meanwhile, the new world number one, Daniil Medvedev, has certainly looked the part in his road to the finals in the Mexican Open, Acapulco, winning all three games so far in straight sets to qualify for the semi-final.

The Russian said he was fortunate two days in a row to not have to play at midnight as some others did, ATP Tour reported.

“It’s pretty tough conditions, quite humid. Even if we play at night, it’s quite hot,” he said.

“The faster the matches, the better you’re going to feel for the next one.”

Medvedev’s round of 16 matches against Pablo Andujar was particularly fast, as he raced out to 5-0 in the first set and 4-0 in the second to win 6-1, 6-2, wrapping up the match in just over an hour.

Other quarterfinalists yet to play for a semi-final berth in Acapulco include world number 3 Stefanos Tsitsipas, number 4 Rafael Nadal, and 6th seed Cameron Norrie.