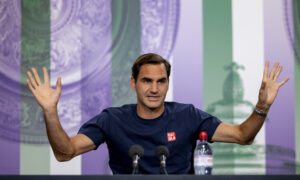 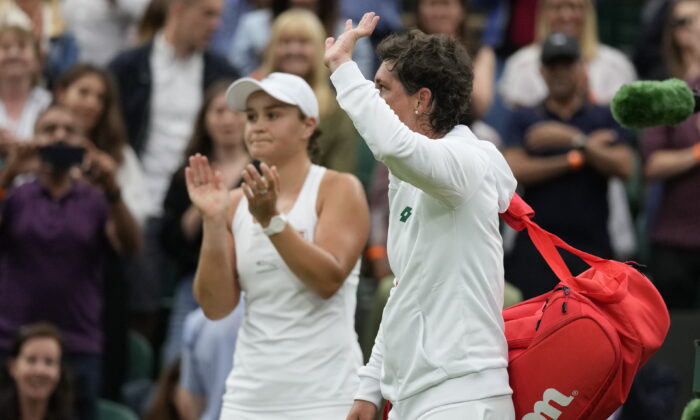 Spain's Carla Suarez Navarro leaves the court after being defeated by Australia's Ashleigh Barty (L) in the women's singles first round match against on day two of the Wimbledon Tennis Championships in London, on June 29, 2021.(Kirsty Wigglesworth/AP Photo)
Tennis

WIMBLEDON, England—Serbia’s Novak Djokovic, Switzerland’s Roger Federer, Japan’s Naomi Osaka, and Australia’s Ash Barty are on the entry lists for the Tokyo Olympics that were announced Thursday by the International Tennis Federation.

As the ITF noted, though, “The entry lists are still subject to change.”

Federer, for one, said last weekend he would wait until after Wimbledon ends on July 11 to decide whether he will head to Japan.

Djokovic has made clear he’d like to pursue a Golden Slam, something only Steffi Graf has done, in 1988: winning all four major tennis tournaments and an Olympic singles gold medal in the same year. He collected the titles at the Australian Open in February and the French Open last month and is scheduled to play his third-round match at Wimbledon on Friday.

The Olympics will mark Osaka’s return to competition after she withdrew from the French Open following the first round to take a mental health break.

The Summer Games open on July 23, and the tennis competition—to be played on hard courts—begins the next day.

Eligibility is based on the rankings of June 14. That was the day after the French Open ended.

Seven of the Top 10 players in both the WTA and ATP rankings currently are on Thursday’s lists.

For the women, that’s No. 1 Barty, No. 2 Osaka, No. 4 Aryna Sabalenka of Belarus, No. 5 Elina Svitolina of Ukraine, No. 7 Bianca Andreescu of Canada, No. 9 Iga Swiatek of Poland, and No. 10 Petra Kvitova of the Czech Republic.

For the men, that’s No. 1 Djokovic, No. 2 Daniil Medvedev of Russia, No. 4 Stefanos Tsitsipas of Greece, No. 6 Alexander Zverev of Germany, No. 7 Andrey Rublev of Russia, No. 8 Federer, and No. 9 Matteo Berrettini of Italy.

Williams said before Wimbledon she wouldn’t be going to the Tokyo Games, and then injured her right leg during her first-round match on Wimbledon’s Center Court and had to stop playing.

On the list: Two-time defending Olympic champion Andy Murray of Britain, who was granted a special exemption because he has the most Olympic and Grand Slam titles of the players whose ranking was not good enough to earn direct entry.

Puerto Rico’s Monica Puig, who won the women’s singles gold medal at the 2016 Rio de Janeiro Games, already had said she would not be able to compete in Tokyo because she had surgery on her right shoulder.