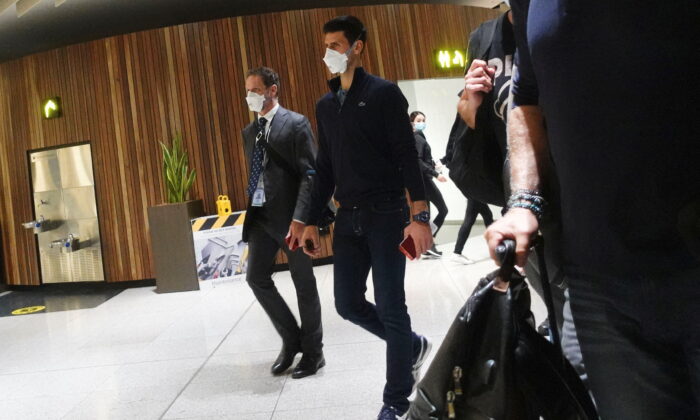 Serbian tennis player Novak Djokovic walks in Melbourne Airport before boarding a flight, after the Federal Court upheld a government decision to cancel his visa to play in the Australian Open, in Melbourne, Australia, on Jan. 16, 2022. (Loren Elliott/Reuters)
Australia

Legal experts are warning the ejection of world number one male tennis player Novak Djokovic from Australian shores after government claims his presence could stoke “anti-vaccination sentiment” is setting a “dangerous” precedent that could further erode free speech around issues such as COVID-19.

While government ministers have maintained that the ejection of the Serbian was on “health, safety and good order grounds”—according to a statement by Prime Minister Scott Morrison—court documents revealed a different picture.

In a 258-page affidavit filed with the Federal Court, Australia’s Immigration Minister Alex Hawke claimed Djokovic was a “high-profile unvaccinated individual,” who could lead other unvaccinated Australians into “refusing to get the jab, anti-vaxxers having their views reinforced and a reduction in the uptake of booster doses.”

The minister conceded that Djokovic posed a “negligible risk” of transmitting the virus to the community. The minister’s decision was ultimately upheld during an urgent court hearing on Jan. 16.

However, Hawke’s use of his discretionary powers to eject the tennis star overturned an earlier court decision on Jan. 10 to allow the world number one to stay. Djokovic had already been detained for a few days in the Park Hotel in Melbourne before the initial court decision granted him freedom temporarily.

“Our concern is the federal government’s view that it did not have to prove that Djokovic would foster views about vaccination that are contrary to the government, but simply that he may foster those sentiments,” Greg Barns S.C., spokesperson for the Australian Lawyers Alliance said in a statement on Jan. 16.

“This is a very low bar for excluding a person from Australia, particularly in circumstances where the power to review or appeal the decision is so limited.

“Using the criteria of a possible risk to public order as a reason to refuse a person entry into the country is troubling in a society supposedly committed to freedom of speech and freedom of thought,” he added.

Barns said the decision paved the way for federal authorities to block other high-profile visitors to the country if they espoused views outside of the popular narrative.

“If, for example, a high-profile visitor to Australia expressed negative views about the Australia and United States alliance, would the government ban this person because this view may encourage people to protest at (U.S. satellite surveillance facility) Pine Gap?” he said.

Barns said the “government’s obsession with harsh border policies” contributed to the problem, which has become an international incident with Serbian President Aleksandar Vučić saying Djokovic’s 10-day ordeal was like torture.

Domestically in Australia, border policy has been a long-running election issue that resonates with parts of the electorate. This, coupled with the country’s tough stance on vaccine mandates and COVID-19 restrictions, created the perfect political storm for Djokovic—who is unvaccinated.

Meanwhile, Maria O’Sullivan, associate professor of law at the Castan Centre for Human Rights Law, said it was unfair for individuals to be denied entry into Australia based on how others may react or perceive them.

“The minister relied on Djokovic’s claimed status as a ‘role model’ and his capacity as a high-profile sportsperson to apparently influence society. What if a sportsperson is unvaccinated but not high-profile?” she wrote in The Conversation on Jan. 16.

Michael Stanton, barrister and president of Liberty Victoria—the state where the Australian Open is held—described the immigration minister’s powers as “God-like.”

“To cancel Novak Djokovic’s visa and to deport him has drawn attention to Australia’s dysfunctional visa cancellation and detention regimes and to the troubling use of the minister’s God-like personal powers,” he said in a statement.

“Liberty Victoria has repeatedly warned about the dangers of such powers.”

Djokovic has since left the country.