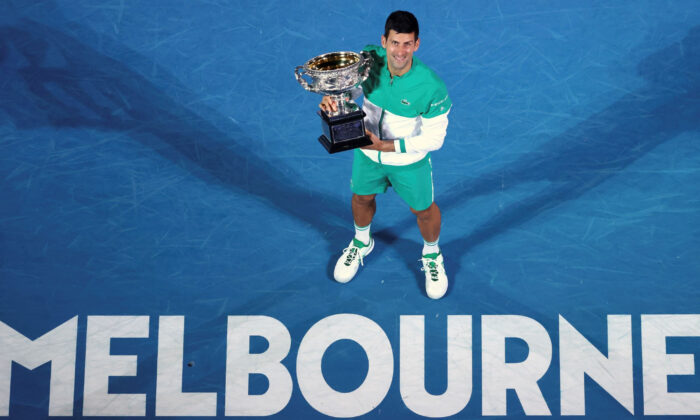 World number one tennis player Novak Djokovic has a good chance of overcoming a court hearing and deportation order in his campaign for a 21st Grand Slam, according to one litigator.

Justin Quill, a media and litigation partner at Thomson Geer lawyers, said there was a possibility the Federal Circuit and Family Court could grant Djokovic an injunction on a current federal government order to deport him, which will push the formal court proceedings to a later date.

This, in turn, would give the Serbian a chance to pursue his 10th Australian Open title.

“I say this with not a great degree of certainty—say 51 versus 49 percent—it doesn’t necessarily mean he’s going to win the case,” Quill told 3AW radio on Jan. 7.

“I suspect the judge is going to say, ‘I’m going to grant an interlocutory injunction … and then I’m going to hear this case properly—we all know the wheels of justice don’t turn quickly—and we’ll hear about in the weeks and months going forward. The judge might just try and hose it down a little bit,” he said.

Quill said similar legal cases “often happened” and that the real battle would centre on whether a court would grant an injunction, or stay, on a government order, thus allowing parties—or in this case, Djokovic—to continue with their activities.

“What usually happens then is the parties suddenly come to some sort of agreement and resolve the case, and that’s the end of it,” he said.

Djokovic is currently fighting a deportation order in court after federal authorities claimed the tennis star did not have an exemption from Australia’s strict vaccination requirements.

The exemption had initially been granted by the state government of Victoria, which oversees quarantine requirements in Melbourne, the home of the Australian Open.

The grounds of his exemption have yet to be officially released and were based on advice from the Australian Technical Advisory Group on Immunisation (ATAGI) and Independent Medical Review Panel, whose members are appointed by the state government.

Further, while state and territory governments can issue exemptions for vaccination requirements to travellers entering their jurisdictions, the federal government controls the international borders and can challenge any exemption.

Djokovic arrived at Melbourne Airport at 11.20 p.m. on Jan. 5 evening and was detained by the Australian Border Force (ABF).

The ABF later released a statement saying the tennis star “failed to provide appropriate evidence” to meet the entry requirements for Australia and that his visa was “subsequently cancelled.”

The tennis star is currently residing in hotel quarantine until his court proceedings are finalised.

Quill was critical of the process behind granting Djokovic an exemption citing a lack of transparency.

“When anyone tells you, ‘I can’t tell you why I’m doing this thing. Just trust me,’ when anyone says that—we’re a little bit suspicious,” he said.

Quill estimated the court proceedings with Djokovic would likely cost the government in excess of AU$250,000 (US$179,000), and if it “drags on and on,” it could balloon to over $1 million.

Tournament organisers will be hoping Djokovic’s case is settled amicably, with Tennis Australia CEO Craig Tiley warning that the prestigious event—one of four major Grand Slams—was not always guaranteed to be held Down Under.

“Even though we have a contract until 2039 for the government, it doesn’t mean that if we didn’t have the event for a few years and another country put in a lot of money for a big event that it’s easy to play at, then they [top players] wouldn’t come here,” he told SEN radio in February 2021.

“The only reason we get the players here is because we offer a lot of prize money, and we spend a lot of time pursuing them to come,” he said. “The other grand slams they played last year, they didn’t have to fly so far or do 14 days of quarantine, so we have to overcome those and get the top players to play here.”