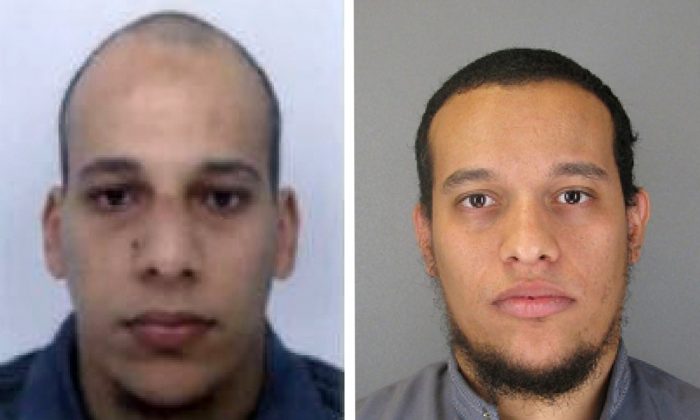 This photo provided by The Paris Police Prefecture Thursday, Jan.8, 2015 shows the suspects Cherif, left, and Said Kouachi in the newspaper attack along with a plea for witnesses. (AP Photo/Prefecture de Police de Paris)
Europe

Cherif Kouachi, one of the alleged Charlie Hebdo gunmen, was mentored by Djamel Beghal, a top recruiter for Osama bin Laden.

Cherif and Said Kouachi have been pegged as two of the three main suspects in the attack on the French magazine, which left 12 dead and about a dozen others wounded.

Cherif, now 32, spent years in prison in Paris, during which time he met Beghal, now 50.

The pair stayed in contact after they left jail. They were photographed meeting in Murat in April 2010, for instance, along with two other convicted terrorists.

Beghal is known as one of the top European recruiters for al-Qaeda, using the Finsbury mosque in London to recruit people for specific attacks. He allegedly recruited shoe bomber Richard Reid, and Zacarias Moussaoui, one of the hijackers in the 9/11 attacks.

A former MI5 informant who worked for years undercover in the mosque described the shootings as “the legacy of Abu Hamza,” referring to the radical cleric who was the imam of Finsbury Park for a while. Beghal was also close to Abu Qatada, a Muslim who was later extradited back to Jordan.

“There is no doubt that you can see the influence of their teachings in him,” the informant, Reda Hassaine, told the Telegraph.”Their warped view of the world has filtered down through him to a new generation.

“A completely new generation, who have never met these people in London, have learned their ideology indirectly and are now willing to die in jihad.”

Beghal’s influence was thought to be mostly plugged when he was arrested in 2001, but the new revelations show he established ties in prison that have now produced more violence.


It emerged on Friday that Amedy Coulibaly, who took hostages in Paris after killing a policewoman, was also introduced to Beghal in prison, and was a close friend of the Kouachi brothers.

All three were part of the Buttes Chaumont network, which operated from the 9th arrondissement in Paris, reported Le Monde.

The cell was run by Farid Benyettou, a preacher who gave sermons calling for jihad in Iraq, and suicide bombins around the world. The group sent at least a dozen men to fight in Iraq.