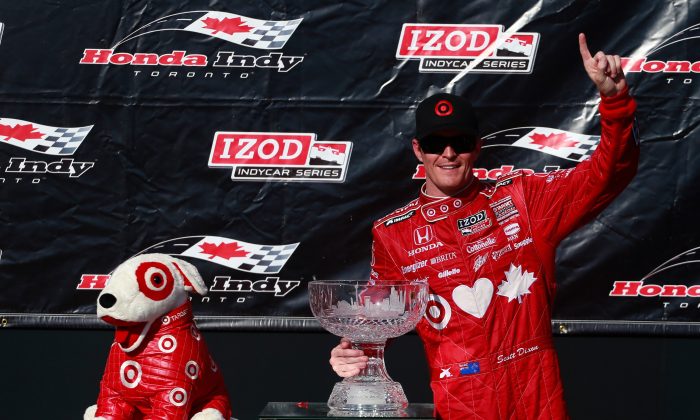 After struggling for the first ten races of the 2013 IndyCar season Target-Chip Ganassi driver Scott Dixon has finally hit his stride with a pair of wins: last week on the oval at Pocono and then Saturday afternoon on the street of Toronto in the first race of the Honda Indy Toronto doubleheader.

Dixon started fifth Saturday; he will start from the pole on Sunday. If he can keep the momentum of the past two races, his mediocre 2013 season might turn into his third championship-winning season.

With the introduction of the new IndyCar, the Dallara DW12 in 2012, Ganassi’s fortunes faded. The engineers couldn’t quite seem to hit the right setup. Its drivers still turned in some goods performances through sheer skill and persistence, but until Pocono the team just couldn’t figure out how to make the cars work.

Dixon went from seventh to third in points with the pair of wins.

Dixon had worked his way into third by the first caution on lap 35. On the lap 40 restart, the Ganassi driver dove inside of Dragon Racing’s Sebastien Bourdais to take second. Dixon couldn’t get by race leader Will Power of Penske Racing, so Dixon bided his time and saved fuel.

When Power pitted on lap 61, Dixon had enough fuel left to turn in one really hot lap before making his own stop. Thanks to his fast in-lap and his excellent pit crew, Dixon was able to rejoin the race just a few feet ahead of his Penske rival.

Power was on hot tires, Dixon on cold. Knowing he was at a disadvantage, Dixon had to decide how to defend in Turn Three where Power was setting up to overtake for second.

Instead of defending the inside or outside, Dixon tried a unique strategy: he braked extremely early, forcing Power to make a choice. Power could have chosen to brake hard himself, giving Dixon the corner, or he could have gone outside or inside.

With only the tiniest fraction of a second to react, Power chose the inside, but the fraction of a second he took ducking around Dixon left the Penske driver too deep into the braking zone. Power locked up and nearly hit the tires while Dixon cut across the corner and kept the position.

A lap later race leader Sebastien Bourdais pitted, and Dixon inherited the lead. Bourdais rejoined just ahead of power and masterfully defended while his tires gained heat. He too was able to hold his position against the charging Penske driver.

A Battle of Two Masters

Another caution on lap 65 made the race even more interesting. Bourdais was on the softer, stickier Red tires, and should have had a performance edge, while Dixon was on the more durable Blacks. The Reds were goods for about fifteen laps; if the caution lasted long enough, Bourdais might have had enough of an edge in traction to win the race.

Scott Dixon made his usual slow-down/speed-up restart; this technique sometimes results in the field have to slow down in reaction, letting the leader accelerate first and get a jump.

Bourdais, a four-time champion, knows all the tricks; he was far enough back that when Dixon slowed, Bourdais didn’t have to, so the Dragon Racing driver got a mighty jump and swept past into the lead.

Dixon pursued patiently, knowing that he would have a short window before the end of the race when Bourdais’ tires would wear out and Dixon’s would still have some life left.

Dixon tried four times to weave his way around the Frenchman’s defenses, but Bourdais was too good. Dixon had another advantage; ever the strategic thinker, he had saved some Push-to-Pass time for the end of the race.

Push-to-Pass gives the driver a temporary boost of perhaps fifty extra horsepower; there are twenty seconds allowed to each car throughout the race. Dixon used his going down Lakeshore Drive, the tracks’s long straightaway, and overtook the hapless Bourdais, who had none left.

One More Hurdle for Dixon

All Dixon had to do was keep it on the island for seven laps and he would have his second win of the season. However, the competition wasn’t being particularly considerate.

Another French racer Simon Pagenaud, was fighting for eleventh place with Montreal-based driver Alex Tagliani on lap 83 when Tagliani tried to force his way by in Turn Three. The Canadian driver pulled inside Pagenaud and accelerated too hard too early, sending his car careening into Pagenaud’s.

Pagenaud continued on but Tagliani spun and stalled bringing out the fourth full-course caution. This meant that when the race restarted with two laps to go, Bourdais would have another shot at taking the lead.

Luck finally favored Scott Dixon: because there was not enough time to sweep up the excess rubber on the track, the restart was single-file. Again Bourdais hung back a little in case Dixon did his accordion-start, but Dixon didn’t. Instead Dixon charged away at the drop of the green and opened a gap of over a second on the Frenchman.

Bourdais just didn’t have the traction to catch Dixon; he had to settle for second while Dixon took the win.

Not everything went the way of Target-Ganassi in the first Honda Indy Toronto race. Dario Franchitti, who had been having an even worse season than his team mate Scott Dixon, finished third in Saturday’s race after starting from the pole. Certainly the Scots-born driver would have preferred to win, but a podium finish was pretty good compared to the luck he had been having.

It turned out his luck hadn’t yet changed.

While Franchitti was standing on the podium holding his trophy, race control decided that he had blocked Penske driver Will Power on the final lap of the race. Franchitti was given a 25-second penalty which dropped him to 13th overall.

Repeated reviews of the incident don’t show a blocking maneuver.

[Editor’s Note: According to IndyCar public relations, after the race Franchitti and Target-Chip Ganassi Racing team members presented IndyCar with” data showing steering trace and braking points from the Lap 85 incident with the No. 12 car” and after review IndyCar rescinded the penalty against Dario Franchitti, reinstating his third-place finish.]

Power was behind Franchitti on the lap 84 restart. Approaching Turn Three, a wide right-hand corner which narrows abruptly and is followed by a left-hand kink, power feinted to the outside, then dive inside to try to squeeze by in almost a carbon copy of the maneuver which failed against Franchitti’s team mate.

Franchitti swerved a bit to the outside; this is totally legal as a defending driver is allowed to make one move, to the inside or outside. That driver cannot make a second move, nor move in response to the attacking car.

Power tried to go inside Franchitti as both drivers were hard on the brakes but Power was moving too fast; his left front wheel hit Franchitti’s right front, then Power fishtailed and brushed the inside wall with is right rear tire. Still travelling too fast, Power shot across the corner and struck the tire barrier on the outside, while Franchitti took his normal line and proceeded.

Race control reviewed the incident, and decided that Franchitti’s car had moved back towards Power a few inches just before the contact, and that this constituted “blocking,” despite the fact that Power was obviously barley in control and swerving side to side, while Franchitti was hard on the brakes, when a car will squirm and slide a few inches despite anything a driver might try to do to prevent it.

There are a few more pieces to the puzzle.

One important piece is that the usual race official, Beaux Barfield, was not able to attend Saturday’s race because of a personal situation (and everybody hopes whatever that is, is resolved as happily as possible.) IndyCar called up a former race official, Brian Barnhart, to fill in for Barfield temporarily.

This is problematical for a couple of reasons. For one, Barnhart was sort of chased out of race control for making bad calls and very inconsistent calls. Team owners and drivers more or less demanded his replacement after he ordered the restart of an oval race in the rain at Loudon, New Hampshire in 2011.

There are no wet-weather oval-racing tires. Many cars, on slick tires and a wet track, predictable wrecked on the restart, endangering the lives of all the drivers and costing millions in damaged equipment.

That was only the final and most egregious error Barnhart made. It broke the camel’s back, and the series moved Barnhart into a position more suited to his many skills (the man has been around IndyCar racing for decades, and is an able administrator.). But, Brian Barnhart as a race official does not have the trust of the teams and drivers.

Even more troubling is the fact that during Barnhart’s tenure, IndyCar had a ridiculous no-defending rule (one of the first things Beaux Barfield changed when he took over in 2012.) Barnhart never had to make a call on a potential blocking maneuver where defending was allowed, and having no experience, it is not certain that he understood the situation correctly.

To add even more to the drama, Franchitti and power have history at Turn Three in Toronto. In 2011, with Brain Barnhart officiating, Franchitti spun Power in Turn Three and was not penalized. Even Franchitti admitted that that incident was his fault—and it seems likely. From the volume of criticism that no-call brought, that Brian Barnhart remembered that day as well as Power and Franchitti do.

Franchitti will survive the bad call, as Power did in 2011. Target-Chip Ganassi racing is still phenomenally successful, with 101 IndyCar wins and several titles to its credit.

Doubleheaders tend to be a bit calmer for the first race, when drivers and crews know they need to save something for the next day, and a bit … less calm on the second day. Hopefully Franchitti and Power, starting second and fifth, will be able to settle Sunday’s contest on the track with good clean racing; and race control will not have any reason to get involved.