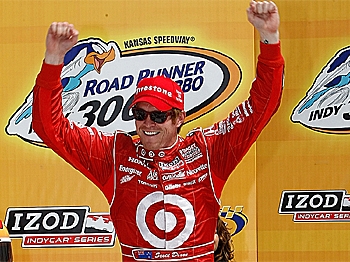 By James Fish
Print
After a disappointing start to the season, Scott Dixon took the lead on lap 33 and never gave it up, leading Target-Ganassi teammate Dario Franchitti to a 1–2 finish in the IndyCar Road Runner Turbo Indy 300 at Kansas Speedway Saturday afternoon.

Kansas was the first oval track on the 2010 IndyCar schedule, and is considered a warm-up for teams preparing for the Indy 500 at the end of this month. After struggling on the road and street courses, Scott Dixon must have been relieved to get back to an oval.

Dixon started second behind Penske driver Ryan Briscoe, who started on the pole after qualifying a full second faster than the rest. After losing his position to Franchitti for a dozen laps, Dixon retook second and took off after Briscoe.

Dixon harried Ryan Briscoe for several laps, looking to pass on either side, before finally getting by. Dixon immediately opened a gap on the field, at one point stretching it to seven seconds, but for most of the race, Dixon stayed a comfortable two- or three seconds ahead of the field.

This is the second year in a row where Kansas was Dixon’s first win of the season. Dixon has 23 IndyCar wins, 16 of them on oval tracks.

“I think doing well at Kansas, going into the month of May, is a big deal. It’s a big deal for Target as well. We‘ve had a slow start on both sides of the team with the nine and the ten [Dixon’s and Franchitti’s cars.]

“This is definitely what we needed, to jump back up in the points table and get some good momentum going into Indy.”

Dixon indeed jumped up the point standings. After Will Power opened up what seemed to be an insurmountable points lead in the early races, Dixon is now only three points behind.

Dario Franchitti was quite pleased with his second place finish, after having terrible luck in the opening races.

Franchitti’s day was not as easy as his teammate’s. Dario was second when Takuma Sato and Hideki Mutoh tangled on lap 178, bringing out a full-course caution. Helio Castroneves beat Franchitti out of the pits, and when the race went green with six laps to go, Franchitti had to pass lapped traffic to get a shot at the Brazilian veteran.

With four laps to go, Franchitti caught Castroneves and the pair ran side by side for half a lap until Franchitti managed to edge past, setting the fastest lap of the race at that point.

Franchitti’s old teammate, Tony Kanaan, was also on a charge at the end, and he turned in the new fastest lap of the race while fighting his was past Castroneves, one lap after Franchitti did.

Kanaan and Franchitti were set for a terrific battle, but the pair came up on Danica Patrick, a lap down. Patrick briefly blocked Franchitti, then tried to drop to the bottom of the track and in doing so blocked her teammate Tony Kanaan, spoiling his chance to challenge for second.

After the race, Dario Franchitti joked about racing Kanaan, but was serious about the problem of lapped traffic.

“Yeah, it was good to see my old teammate up there, but he was a little too close at one point.

“At the end the backmarkers were getting in the way—again—and running two-by-two, giving people running in position on the lead lap nowhere to go, so we’ve got to fix that.”

Backmarkers also played a factor at the IndyCar Long Beach Grand Prix, where a pair of lapped cars hindered Justin Wilson from catching Ryan Hunter-Reay, and where lapped cars which refused to move aside caused two accidents: Mario Romancini knocked Graham Rahal out of the race, and Justin Wilson collided with Alex Lloyd while trying to pass the lapped driver.

Possibly IndyCar will have to address two issues: Lapped cars dividing the leaders on restarts, and lapped drivers refusing to allow the leaders through.

Tony Kanaan was the best-placed of the Andretti Autosports cars, despite not having the right set-up.

“We didn’t have a fast car,” he told Motor Racing Network. “On the restarts, the two Ganassi boys just drove away, but I did what I could. We had great stops—the whole 7-11 crew did a great job, and they gained me a few positions, so it was a good day.”

Helio Castroneves fell from second to fourth in the final few laps of the race. “Unfortunately my car started building up understeer, and we had so much traffic in front of us,” he told MRN. “But certainly the Target guys, they were in a league of their own.

“But we are not going to let them carry that momentum to Indy, We are going to work four times harder so we can win at Indy.” Castroneves will be looking for his fourth Indy 500 win this year.

Pole Day (May 22) and Bump Day (May 23) qualifying will be broadcast on Versus TV.