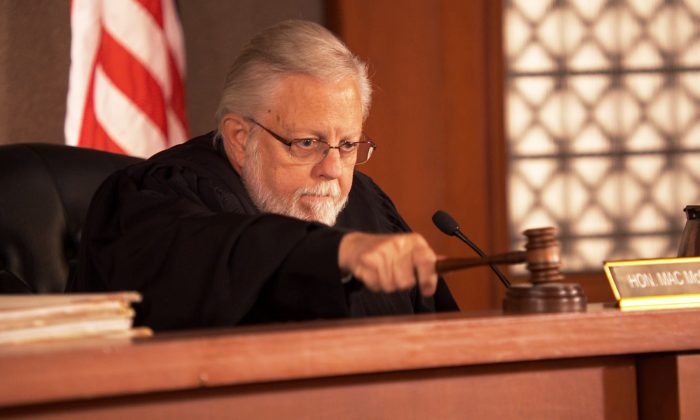 A divorce court judge as seen in the documentary “Divorce Corp.” (Courtesy of Divorce Corp)
Entertainment

It’s not a gender thing, it’s a lawyer thing. It turns out that predatory divorce lawyers and judges, congenial to the point of collusion, have rigged the system to line their respective pockets.

That hardly sounds shocking, but the reality is worse than you imagined, at least according to a new documentary openly advocating a comprehensive overhaul of the American family law system. The lawyers and judges profiting from broken families stand duly indicted in Joseph Sorge’s “Divorce Corp,” which opens this Friday in New York.

Like a shrewd consensus builder, Sorge includes an equal balance of men and women who have been done wrong by the judge presiding over their divorces. When watching the case he lays out, it seems that neither the man nor the woman has a built-in advantage. It all depends on whose lawyer is more buddy-buddy with the judge.

You might assume that a judge would recuse himself from hearing a case presented by a close friend and former law partner, but in family court you would be wrong.

Sorge paints an alarming portrait of the family court as a judicial tyranny, where jury trials and the right to counsel no longer apply. Perhaps most shockingly, he interviews two victims of judicial persecution (one man and one woman), who were sent to prison on dubious charges (such as “judicial intimidation”) after publicizing in the media their judges’ clear conflicts of interest.

As an alternative, Sorge and his associates point to the Scandinavian model as a better method of divorce. They might be right, but it is hard to imagine that restricting alimony until the finalization of the divorce will catch on here anytime soon.

For a start, states with a referendum should pass provisions mandating full conflicts of interest disclosure and allowing potentially disadvantaged parties to opt for judicial reassignment. The various state bars should also automatically investigate any divorce dragging on longer than 12 months. Sorge argues that long proceedings are indicative of frivolous motions designed to bleed both parties dry.

If Sorge and co-writers Blake Harjes, James D. Scurlock, and Philip Sternberg have misrepresented the reality of family law in America, then the Bar Association should produce a rebuttal documentary post-haste.

“Divorce Corp” is a compelling indictment, given additional authority by the participation of narrator Dr. Drew Pinsky (who has credibility as an advocate for personal responsibility). To a layman viewer, it comes across quite even-handed and never engages in hysterical hyperventilating.

Still, “Divorce Corp” is not exactly fun stuff, but it is highly watchable, particularly when colorful private detective John J. Nazarian offers his commentary. When he says that he would rather go through death than divorce, it is pretty heavy.

Recommended for legal reform activists and those looking for a justification to stay single forever, “Divorce Corp” opens this Friday, Jan. 10, in New York at the Quad Cinema.