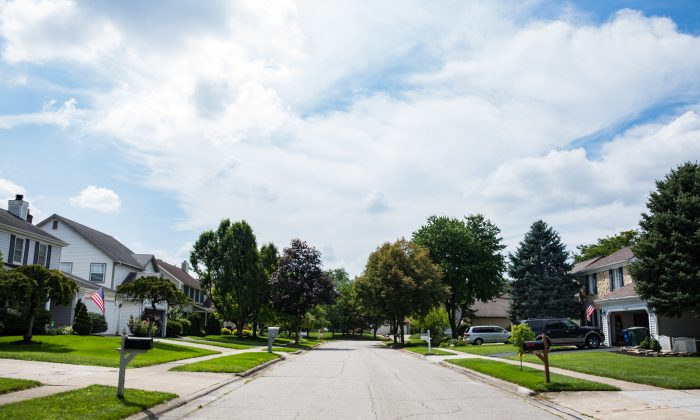 A neighborhood street near where Marsha lives in the northwest part of Columbus, Ohio, on July 28. (Benjamin Chasteen/The Epoch Times)
US

Marsha, 66, wished to remain anonymous for this interview, saying “with our country as divided as it is, we do not feel it is safe.”

“It’s terrible to have to be that way, because I’m an outgoing person. But you have to be, because you’ve got kids, grandkids, and who knows what someone can do if they get crazy enough.

Marsha, a retired bank teller, cherishes freedom and safety for her family—she has four children and six grandchildren. Homeland security is the top issue for her, with retirement and health care not far behind.

She has a lot of faith in Trump and isn’t fazed by his brashness.

“He doesn’t pull any punches, he says what he means. He’s not diplomatic. Obama was very diplomatic and highly educated and a very good speaker. Trump is very good, he just tells you what’s on his mind, and if you don’t like it, too bad, and that offends a lot of people.

“I’m looking at what he wants to accomplish rather than how polished he is with a microphone. If he can get our country turned around, that would just be a miracle. Not only get out of debt, but stop all the [illegal] immigrants from coming in, and give the jobs back to the American people.

“People don’t realize how much better it would be. They just think, ‘Oh, I don’t like him, he’s obnoxious.’ Well, he might be obnoxious, but he does have some good ideas.”

Marsha is an advocate for well-vetted, legal immigration.

“It’s not that we don’t want them, [we] just have to make sure that they’re not going to harm us. We need to vet people better … so we know whether they have any ties to terrorism.

“It’s to keep the freedom that we have and not let it be jeopardized by these groups that are trying to set up their own country in ours—Sharia law and all that kind of stuff.

“You’re welcome to the country, but if you’re going to live here, respect our culture and learn the language. That’s what it used to be. If you want to be here, you can be an American. But if you want to just come in and do your own thing, that’s not what we want. That’s not what America is.”

She wants to see an end to sanctuary cities and eliminate the appeal of hiring illegal immigrants at a cheaper rate.

Marsha has seen American values decline over time and believes it started when prayer was taken out of schools.

“It just spiraled downhill from that. And that was a long time ago. And especially the elementary schools, the teacher, they’d ring the bell, they’d say the Pledge of Allegiance, and then they’d have a little prayer.”

“Because it seems like the people that go to their church—it doesn’t matter what the church is—if they go to their church and they have things in common with someone, they have church house values, if they respect those values, everything works together. But once they dump it all, anything goes.”

“The American dream is the same today as it was 50 years ago. We all want to have our education, have our homes, have our families, have a car, have it be safe, but it’s getting harder and harder—the dream that we all had years ago, it’s not there,” Marsha said.

Job stability is not available like it was in the past, said Marsha, and that becomes a threat to Americans.

“If they can replace you for half price, they’re going to. Especially when you get older. It’s all about the companies now. It’s not anything about Americans and how much time you put into the job and how faithful you were with the company and how much you did for the company. That’s all out the window,” she said.

“We need to do the things that got Trump elected. He promised border control and security. He promised vetting the immigrants of Islamic countries to make sure we didn’t let any people in to start things. He promised to support the police, the law enforcement. He promised to clean up the decaying inner cities, and to increase the military, and put an end to the welfare generations. …  If they’re able-bodied men and women, with nothing wrong with them, they should work.”

Overall, Marsha is happy with what Trump is doing.

“He’s doing fine. He’s done as much as he can by himself, but the Democratic obstructionists are standing in the way of the health care, the tax reform. It seems like the Democrats would rather see America fail than Trump succeed.”

Veteran Says the Real Threat to America Is From Within
Follow Charlotte on Twitter: @charlottecuthbo
TOP NEWS