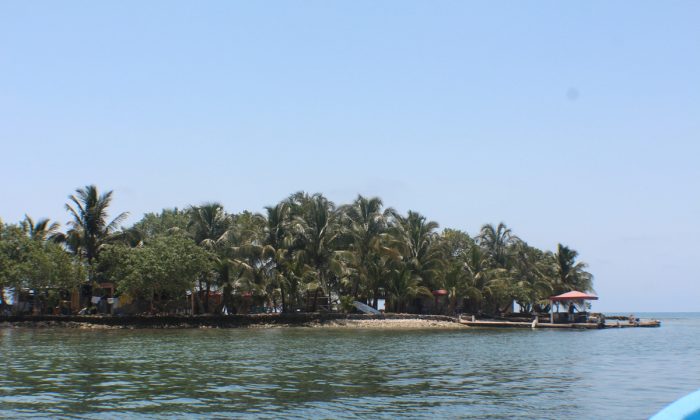 Polly Alford was born in Kent, Southeast England. “I left when I was sixteen. I took a secretarial course and became a high-powered secretary for a private hotel in the West End of London,” she related. She was relaxed, having a drink in the garden of the Colonial Inn in Punta Gorda, Belize. The setting is far removed from this 47-year old’s former life selling time-shares in Portugal, motor cars in UK and her night-school education in marketing.

“I got a job with a software company. It was a three-hour drive to get to the office and a three hour drive back.” When the company went belly up, Polly took a trip to the Red Sea. “It wasn’t crazy, crazy back then. Sharm was mostly a diver’s destination. All you saw on the plane was Diver Magazine.” On her return flight Polly saw an employment advertisement in Honduras. She got the job and spent three months working in marine conservation on the Island of Roatan.

Back to England, back to work, back to diving every holiday. She went to Ft. Lauderdale, Florida and took her divemaster course. Polly made vacation trips to dive destinations from Fiji to South Africa. In 2004 Polly got on a plane and arrived in Belize for the first time. She met people involved in reef conservation. Business plan in hand, Polly sold her house in England and funded Reef Conservation International.

She moved to Punta Gorda a southern city on the Gulf of Honduras. It became the base for Reef CI and Blue Reef Adventures. Polly now leases Tom Owen’s Caye from its American owners. It is the southern-most key or ‘caye’ in the Sapodilla Cayes Marine Reserve.

Tom Owen’s Caye is 36 miles from Punta Gorda. The trip to the island requires an almost 2-hour ride in an open launch. The reserve covers 174 square miles. It runs in a fish hook shape with Tom Owen’s Caye at the southernmost end.

The lodge has wonderful rooms that open onto the sea. Trade winds blow; sunrise and sunset from the rooftop above the lodge can be glorious. The setting is rustic. Because of the remoteness of the island, dive packages are all inclusive. Generally there are three guided dives a day, each before meals.

Jason Guy is Reef CI’s marine biologist. Born in the Toledo District of Belize, Jason studied business administration at St. John’s College. He worked for the social security board then, when conservation organizations wanted to create a nature reserve in Belize in 2005, he became the administrative financial officer.

“My passion grew for conservation. I studied natural resource management part time,” he said. When an opening for manager of the Sapodilla Cayes Marine Reserve came up, Jason applied and was accepted. “I got into diving when I joined the Fisheries Department as reserve manager. Polly was my instructor.” In 2013, Jason left his job as reserve manager and joined Polly as her marine biologist

Jason guided us over a 30-foot deep reef that formed sand valleys. Some of the serious issues Jason described imperiling Caribbean reefs were immediately apparent. Algae was present. The purple growth was stifling coral. Lionfish were everywhere. While visibility was about 40-feet, there was material in suspension in the water column. Water temperature was 85 degrees F making dives most comfortable.

This first dive would set the pattern for subsequent explorations in the Sapodilla Cayes reserve near Tom Owen Caye. The boat captain, ‘Snake’ Selgado, would take us to a site. The open launch would not anchor. When divers were ready, a backward roll all at the same time, then descent with a divemaster that held a reel attached to a surface float.

Jason and other divers would take Hawaiian slings to spear as many lionfish as they could. While spearing fish and collecting conch and lobster can only be done free-diving in Belize, an exception to the rule has been made in the case of invasive lionfish. Divers can spear them using tanks.

The next morning we took a ten-minute launch ride to a site Jason said they had not explored. Fishermen caught blue runners on the reef so they named it Blue Runnings. We were guided over sand where divers speared lionfish at scattered coral heads. We came to a reef in about 60 feet depth. Beyond the reef, blue water indicated a drop off. The blue water was much clearer than the area over the reef. Jason later told us the depth over the blue was 300 to 500 feet. Basket sponges and soft coral on the shallower reef offered the underwater photographer great opportunities.

Back at the lodge we showered quickly since fresh water is supplied by rain catchments and is precious. A bell rang and we were called in for breakfast. Adrianne, Reef CI’s cook, prepared pancakes and eggs. There was coffee and tea. Potable water has to be carried over from the mainland. This is true of all supplies and food. There was ample time before the next dive to relax in hammocks hung between coconut trees.

Another reef dive to 30-feet and more lionfish. American divers Jim McAlister from Sacramento, California and Ron Suokko from Hawaii were really into spearing them. When they arrived at Tom Owen’s Caye there was only one Hawaiian sling available. They ordered two more from Belize City so they would have their own spears during their second week on the island. These two adventurous friends extended their stay an extra week and generously left their spears behind for future divers. They patiently posed for pictures holding out their venomous prey. Back at the lodge the crew cleaned the fish and Adrianne prepared lionfish ceviche and fritters.

Spiny lobsters posed for pictures without fear. In season Belizian free-divers catch them using pointed hooks that they prog into the soft underbelly and pull them out of their holes. Conch are present on the reefs and offer photo opportunities. Free diving to collect conch is allowed. Coral heads with gorgonian fan corals sheltered cleaner stations and reef fish.

Back to the island for lunch of spaghetti and meat sauce. During our time on the island meals were a social occasion. Guests came from around the world. Steve Wood was from Wickham, 30-miles west of London. Olivia Hill just completed her university training in art history at St. Andrews in Scotland. Emma Kistler hailed from Wilton, Connecticut. We were joined by an American film crew doing a segment for the Outdoorsman show with Buck McNeely.

On one of the film crew’s outings they came across a manatee. “I’ve been here ten years and never saw a manatee this far offshore,” Polly recounted as Buck interviewed her for the show.

Alton Selgado filled tanks while we ate lunch. The gear was ready and waiting for the next dive. Prince, one of the divemasters, offered to take us for a dive around the island. We got in from the sheltered boat basin. We were never more than fifteen feet deep. This proved to be an extraordinary dive. Stands of staghorn coral grew up near shore and coral formations were quite beautiful.

Diving Belize’s Cayes is an adventure. The official language in this independent British Commonwealth Realm is English. Reef CI operates on Tom Owen’s Caye Monday through Friday only. The island is shut down on weekends thus those wishing to stay longer must return to Punta Gorda and find touristic opportunities until Polly’s launch returns them on Monday.

Guatemala City is served by most major airlines. Direct non-stop flights to and from Miami take less than three hours. To make connections easy, when travelers come from the UK or foreign destinations, as well as Americans traveling to Central America making connections through Miami, the Sheraton Miami Airport Hotel is five minutes from the airport. They offer free shuttle service and valet parking. Those that drive can leave their car with confidence at the Sheraton Miami Airport Hotel. It is convenient and safe.

FOR MORE INFORMATION: To reach Polly Alford at Reef CI email them at polly@reefci.com or phone in Punta Gorda 501-626-1426. Their office is at 41 Front Street, a short walk from customs and immigration. For reservations and parking at the Sheraton Miami Airport Hotel call them at 305-870-8102.