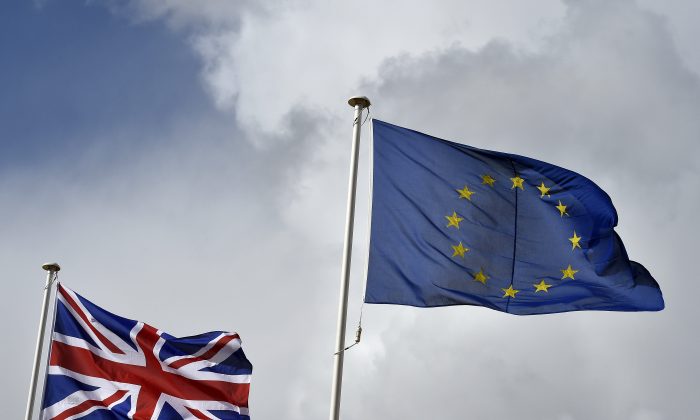 Great Britain and the European Union flags flutter at the opening ceremony of the Commonwealth Heads of Government Meeting (CHOGM) at the Mediterranean Conference Center near Valletta, Malta, on Nov. 27, 2015. (Toby Melville/Getty Images)
Europe

As the debate over Britain’s future in the European Union gathers pace and heat, there has been much discussion of what might happen if voters in England, Northern Ireland, Scotland, and Wales disagree. What if the U.K. were to leave based on the English vote alone?

Would such an outcome provide the “material change” in circumstances cited by the Scottish National Party’s (SNP) leadership as a potential trigger for a second independence referendum? What would such a decision mean for support for independence in Scotland and Wales? Could there even be implications for the peace deal in Northern Ireland, as the Irish prime minister recently suggested?

At the same time, rather less attention has been paid to the potential for another, equally plausible, outcome. What if England votes narrowly in favor of leaving the EU, but is kept in Europe by its more Europhile U.K. neighbors? Could such an outcome trigger calls from England for further loosening of ties within the U.K.?

All recent survey and polling data confirm that such a gap does indeed exist. Recent polls suggest support for leaving the EU could be as low as 25 percent in Northern Ireland and 36 percent in Scotland. In Wales it sits at 45 percent. Meanwhile, in England, 48 percent say they would leave (based on averaging recent opinion polls in each country, excluding those who do not know how they will vote).

At the moment then, the polls point to all four countries voting to remain in the EU. But the margin of support for remaining is clearly narrower in England than elsewhere.

Some relatively simple modeling (multiplying the estimated leave vote in each country by that country’s percentage share of the U.K. population and then summing the totals) enables us to estimate a “tipping point” for votes in England. Above that point, England could take the rest of the U.K. out of the EU against its will. Below it, and England might be kept in the EU against its will by its neighbors.

The first thing to note here is that the size of England relative to its neighbors means that a relatively modest majority in favor of leaving there would be enough to outweigh any level of support for remaining in Northern Ireland, Scotland, and Wales. If 59.6 percent of people in England voted to leave the EU, it would be enough to take Britain out of Europe—even if no one in Northern Ireland, Scotland, and Wales voted to leave.

However, if we assume that Scotland, Wales, and Northern Ireland in fact vote as indicated above (based on the averages of recent polls in each country), then a narrow vote in England in favor of leaving (between 50 and 52.5 percent) could be overturned by the popularity of staying in the EU elsewhere in the U.K. But if more than 52.5 percent in England voted to leave, the views of those elsewhere in the U.K. would be outweighed and the U.K. as a whole would have a majority (just—50.1 percent) in favor of leaving.

Of course, calculating such a tipping point involves a lot of assumptions. The polls in each country would have to be largely correct, for a start, and opinion would have to remain the same up to the vote.

Given the apparent narrowing of the overall lead for the remain campaign in recent polls (our most recent poll of polls puts support across the U.K. for remaining at just 51 percent, compared with 49 percent for leaving), it is feasible that support for leaving could increase across all four nations, and not just in England.

Tweaking the figures to assume a 4 percentage point increase in support for leaving the EU in Scotland, Wales, and Northern Ireland reduces the tipping point to 51.7 percent—if the leave vote in England were above this, then the U.K. as whole would be tipped in favor of leaving even while Scotland, Wales, and Northern Ireland still remained on balance in favor of remaining (albeit only just in Wales in this scenario).

Conversely, if support for leaving the EU fell by 4 percentage points from the figures indicated above in each of Scotland, Wales, and Northern Ireland, then at least 53.3 percent of people in England would need to vote to leave before the U.K. as a whole would be tipped in favor of leaving.

If the race in England is indeed as tight as current polls suggest, these figures suggest there is considerable potential for the referendum to produce constitutional headaches beyond the specific issue of whether we remain in or leave the EU.

Rachel Ormston is senior research director of social attitudes at ScotCen Social Research in the U.K. This article was previously published on TheConversation.com.