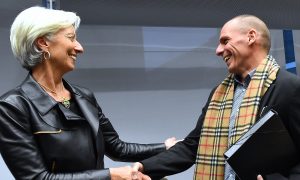 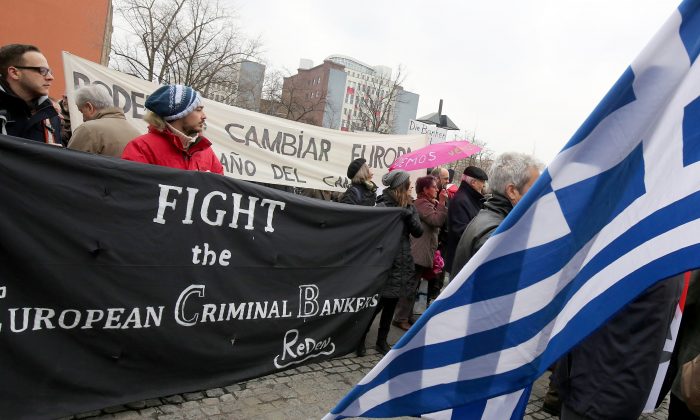 Protesters hold a sign reading “Fight the European Criminal Bankers” and a Greek flag in front of the German FINANCE Ministry in Berlin on March 14, 2015. (Wolfgang Kumm/AFP/Getty Images)
Opinion

Europeans have control over their own fate, yet at no point since the end of the Cold War has their collective fate seemed so precarious. The threats are diverse as the continent’s political institutions and way of life are being tested by ISIS-linked terror attacks, Russia’s hybrid war on Ukraine, and the continuing agony of economic depression in southern Europe. Each challenge has separate causes, but all are exacerbated by the chasm between Europe’s goals and its capabilities.

For years, many in Europe have called for the continent to take charge of its own destiny. During the Cold War, both the Soviet Union and the United States played significant roles in European politics, but since 1991, Washington has been the significant outside player, cajoling European states into participating in American-led efforts at global governance.

U.S. predominance has occasionally grated, and many Europeans advocated that their continent become an influential geopolitical actor in its own right. Some even hoped that Europe could act as a counterweight to what many Europeans perceived as an overbearing America. With the creation of the European Union and its expansion throughout Central and Eastern Europe, by the early 2000s it seemed that Europe had the tools to act independently of outside powers.

In the aftermath of the second Iraq War and the election of Barack Obama, the United States seemed more willing than at any point since World War II to relinquish many of its responsibilities in Europe. Even under the George W. Bush administration, Washington had begun redeploying combat troops from Western Europe to other theaters. The Obama administration has continued to disengage from Europe, because it, too, prioritizes other regions, and hopes that reducing U.S. commitment will force allies to bear more costs of their own defense.

The last several years, therefore, provided a test of the European project, as U.S. disengagement gave Europe ample room to chart its own course in political, military and economic terms. So far, the results of this experiment have disappointed.

Europe bungled its response to Greece’s debt crisis while relying on the International Monetary Fund to help fund the bailout. Meanwhile, the continent continued to rely on American resources to attain Europe’s geopolitical goals. Even as the United States reduced defense spending, most European countries declined to better fund their own militaries.

In Ukraine, for example, Europe faces a contradiction between its desire for a peaceful neighborhood and unwillingness to take steps needed to realize this goal. Russia’s invasion of Ukraine in March 2014, lopping off Crimea, caught most Europeans off guard. They had hoped the prospect of trade and economic growth would encourage Russia and Ukraine to play by Europe’s rules. When Russia chose to reject these rules, using what Western officials have criticized as 19th century behavior to assert their influence in Ukraine, European capitals were divided about whether to respond with diplomacy and sanctions. Military intervention was out of the question.

On the one hand, Europe continued to insist that Ukrainian sovereignty is inviolable and that Russia should not be allowed to obstruct Kyiv’s relations with the European Union. But Brussels has not backed up its claims with serious resources. Economic sanctions have harmed Russia’s economy, but not yet forced Russia out of Ukraine.

Meanwhile, despite insisting that Ukraine’s sovereignty is sacrosanct, the EU took relatively minor steps to support Kyiv. Financial help has been modest. Indeed, Europe turned to U.S.-led institutions such as the International Monetary Fund to organize a bailout of Ukraine’s government, suggesting that Europe remains dependent on the Atlantic Alliance.

Across the Mediterranean, too, Europe has floundered in the face of a series of crises. In the 2003 invasion of Iraq, many Europeans called for the United States to step back from the Middle East and North Africa on the grounds that the EU could wield effective influence. Indeed, Europe has many assets in the region: three of the EU’s biggest member states, France, Italy and Spain, are located on the shores of the Mediterranean. France in particular makes use of links dating back to the colonial era to exercise influence from Lebanon to Morocco. Europe also dominates the Mediterranean economy, which depends on Europe as a source of investment and an outlet for laborers.

Despite these levers of influence, Europe struggles to provide stability on its southern borders. In 2011, for example, France and Britain led a bombing campaign to end Libya’s civil war by toppling the country’s long-serving dictator Moammar Gadhafi. Though several Arab countries and the United States participated in the intervention, the campaign was widely recognized as a European initiative. One Obama adviser described U.S. strategy as “leading from behind,” suggesting that Washington would let its allies play a prominent role.

Yet Europe proved unable to do so. The continent was divided, with Germany unwilling to participate in the military campaign led by France and Britain. That left EU institutions paralyzed. At the same time, lacking clear lines of responsibility for dealing with the war’s aftermath, Europe’s powers lost interest, counting on others to pick up the slack. Yet no one did. Libya—a country only several hundred miles from Europe’s border—slipped back into civil war.

In an array of crisis zones across the Mediterranean, from Libya to Egypt to Syria, the EU has struggled to devise coherent policies even as thousands of European citizens have joined ISIS-linked militias.

The depression in Greece is usually seen as an economic problem, but it, too, is exacerbated by the mismatch between political goals and institutional capabilities. Greece is stuck between knowledge that exiting the eurozone would spark an economic meltdown more disastrous than its current state and the reality that the only way to stay in the eurozone is to accept painful austerity programs demanded by European partners. Greece’s creditors, too, are constrained, because easing the terms of Greece’s bailout deal increases the chance that far-right parties—many of which oppose the euro itself—would take power in future elections.

In the euro crisis, the continent’s governing structures are at fault. The EU, envisioned as a single economic space, has 28 mechanisms for economic governance, one for each country. Meanwhile, with the smallest countries holding veto power, the requirement that many decisions be taken unanimously has paralyzed Europe’s ability to make tough decisions. Here, too, the continent is suspended at an unhappy midpoint between being a group of states and a single country. As in the Ukraine crisis, Europe has had to call in the IMF to help fund Greece’s bailout. Far from transcending the old order, Europe could not survive without it.

These spiraling crises have not only eroded the credibility of the entire European project, they have underscored the difficulty of getting Europe to act in unison when it remains a group of 28 separate countries. Germany is the clear leader, but Berlin struggles to corral European partners toward a single policy. The continent’s failures, meanwhile, are empowering populists and undermining Europe’s hard-won political stability.

Europe’s leaders have spent the past half-decade putting out a series of fires, from Greece’s debt mountain to war in Ukraine to the threat of British exit from the EU, and back again to Greece. The continent remains in desperate need of strategic thinking. Until European leaders realize that no number of short-term fixes can remedy the long-term mismatch between Europe’s expansive goals and its meager capabilities, such crises will persist.

Chris Miller is a doctoral candidate at Yale University and a research associate at the Hoover Institution. He is currently finishing a book manuscript on Russian-Chinese relations. © 2015 YaleGlobal Online and the MacMillan Center at Yale.