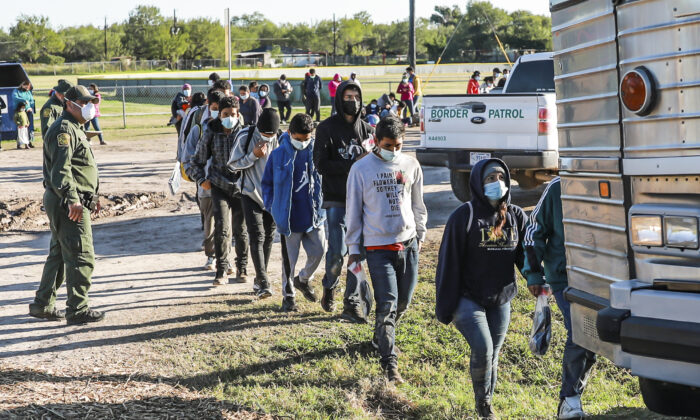 Divisions Grow Among Catholic Groups Over Aid to Illegal Aliens

CatholicVote and conservative watchdog group Judicial Watch filed the federal lawsuit based on two denied Freedom of Information Act requests made to the U.S. Department of Health and Human Services and the Department of Homeland Security.

CatholicVote suggests in the lawsuit that the Catholic organizations and named individuals may have been conspiring with the federal agencies to bypass state-mandated vetting procedures of illegal immigrants known to be sick with COVID-19 and then using taxpayer dollars to house them in hotels.

“There is no Catholic teaching that I’m aware of that would justify open violation of federal or state law with taxpayer dollars in order to achieve something good,” Brian Burch, president of CatholicVote, told The Epoch Times. “The hypocrisy is glaring if, in fact, we have a different standard for migrants at the border than Americans within the United States.”

Phone calls made by The Epoch Times to the named parties in the suit weren’t returned by press time.

CatholicVote has drawn fire from other Catholic organizations for questioning the efforts of Catholics at the border.

“Those serving the voiceless and vulnerable at the border deserve prayers, support, and gratitude, not partisan attacks,” Kim Daniels, co-director of the Initiative on Catholic Social Thought and Public Life at Georgetown University, wrote on Twitter in response to the lawsuit.

It’s the latest in a growing divide within Catholicism on issues of illegal immigration, abortion, support of Catholic pro-abortion politicians such as President Joe Biden and Nancy Pelosi, and COVID-19 vaccine mandates.

The same day CatholicVote filed its lawsuit, a group of parents called Concerned Catholics launched a petition with the Archdiocese of Washington against Catholic School Superintendent Cardinal Wilton Gregory over his refusal to recognize religious exemptions to the COVID-19 vaccine from Catholic parents.

The petition, organized through Change.org, charges that Gregory’s refusal to accept religious exemptions from the vaccine contradicts the faith’s most fundamental beliefs.

“It is unacceptable and constitutes coercion of conscience that any Catholic school should require students to obtain morally objectionable vaccines for admission,” the parents wrote in their petition.

The Washington Archdiocese didn’t return phone calls about the issue by press time.

In a publicized speech in January, Pope Francis, in contrast to the Washington Catholic parents, called the vaccine a “moral obligation” and described Catholics opposed to it as “people who let themselves be influenced by the ideology of the moment,” referring to the ideology as “baseless information or poorly documented facts.”

According to a poll by the Pew Research Center, U.S. Catholics are roughly split down the middle politically, with about 48 percent of Catholic registered voters voting Republican and 47 percent voting for Democrats. That divide has led to a right-wing/left-wing Catholic church divide.