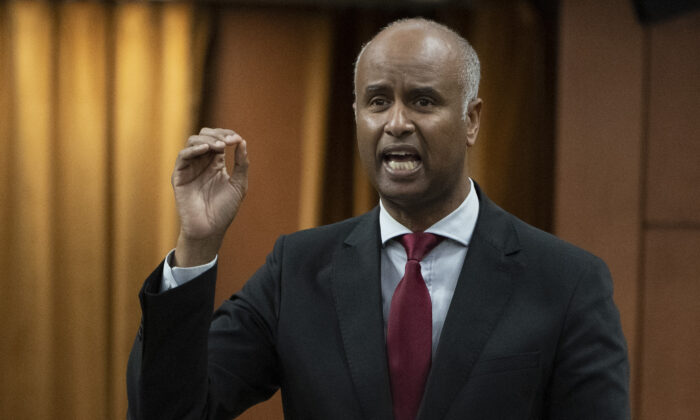 Housefather told the National Post that he had urged the minister to take action in regard to antisemitic tweets made by Laith Marouf, who is listed as a senior consultant on the website of the government-funded Community Media Advocacy Centre (CMAC), before those tweets became widely-reported.

“I said the contract had to be cancelled. I alerted [Hussen] and I persistently communicated with the minister in his office, from the day I learned about it, until today, and aggressively demanded that action be taken,” Housefather said in the article published on Aug. 23.

“Action could have been taken more quickly.”

The CMAC, which identifies itself as an organization that “offers advocacy and support” to the indigenous, disabled, and other minority communities, received a $133,822 grant from the Heritage Department in 2021 to build an anti-racism strategy for Canadian broadcasting. The program was launched this past April.

Marouf was found to have made a number of antisemitic posts on Twitter dating back to November 2018. While his account has been suspended, screenshots shared by journalist Jonathan Kay on Aug. 19 show a number of such tweets with Marouf’s name and photo.

“You know all those loud mouthed bags of human feces, aka the Jewish White Supremacists; when we liberate Palestine and they have to go back to where they came from, they will return to being low voiced [expletive] of their Christian/Secular White Supremacist Masters,” Marouf said in one tweet on Aug. 10, 2022.

Hussen, who oversees the diversity and inclusion program in the Heritage Department, said he has asked the agency to “look closely at the situation” in what he described as “unacceptable behaviour” by Marouf.

“The reprehensible and vile comments made by [Marouf] go against everything our government, and our country, stand for,” Hussen said in a statement posted on his official social media account on Aug. 21. “My team and I are working to rectify this matter immediately, which we take extremely seriously.”

“Organizations dedicated to fighting racism and discrimination must employ and partner with individuals who adhere to the values of inclusion and human decency,” he added.

Update by the Minister of Housing and Diversity and Inclusion on the status of the Community Media Advocacy Centre project. pic.twitter.com/LPqMsv3hQP

In an update on Aug. 22, Hussen said notice has been sent to the CMAC that government funding has been cut and that its anti-racism program has been suspended.

The CMAC is also asked to explain how they came to hire Marouf and provide a plan for “rectifying the situation given the nature of his antisemitic and xenophobic statements.”

Housefather also called on the heritage department to conduct a thorough investigation into the incident, adding that the House of Commons heritage committee should also meet and hear testimonies from Hussen and the department.

“I think we all want to understand how, when it was relatively simple to Google what Mr. Marouf has said over the last 20 years that was insulting not only to Jews, but to other groups like French Canadians, how the department awarded a contract to a group that is so closely tied to Mr. Marouf and his partner,” Housefather told the National Post.

Members of the opposition have also called for accountability from the heritage department for providing funds to CMAC.

“Again and again, no accountability. Rather than demanding who at Heritage Canada approved the [money], Minister demands who at CMAC hired Marouf,” Conservative MP Melissa Lantsman said in an Aug. 22 Twitter post, adding that the statement made by Hussen the same day “isn’t a serious response.”